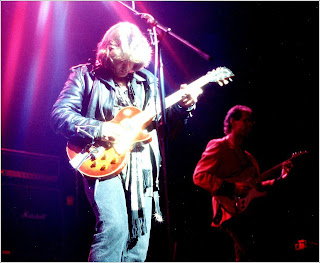 We were at a loose end in New York City, my two mates and I. It was late December 1986, and we'd been in The Big Apple just a few days. We'd seen the hit novelty movie Crocodile Dundee at a cinema just off Times Square the previous night. Thought it might be an idea to check out a band. So I went downstairs from our hotel room to a chilled-to-the-bone December afternoon on 47th St in Midtown Manhattan. I walked past steaming manholes and walk-up brownstones until I found a newstand and grabbed a copy of the Village Voice.

The gig guide at the back contained some good news for me. Well, actually it was sensational news. The Lone Star Cafe in Greenwich Village had the Mick Taylor Band playing that night. Ex-Rolling Stone Mick Taylor is one of my all-time favourite guitar players. And I'm not alone in that. 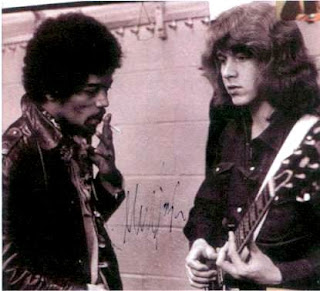 But first I had to be certain. Mick Taylor can be a fairly common name. I've known three of them in Melbourne alone. Plus there was a Michael Taylor who played football for Collingwood and another who played cricket for Victoria. That's five all up. And the Lone Star Cafe sounded a bit country to me. What if the Mick Taylor playing there was some good ol' boy from Lubbock, Texas and not the ex-Rolling Stones guitar player? A simple phone call to the venue sorted out any possible mistaken identity and we were off to check out the guy who replaced Brian Jones in the Stones in 1969 and Ronnie Wood's predecessor.
I'd seen Mick Taylor once before at the Chevron in Melbourne in 1982. If that was the realization of a dream, this took it up a notch. I was going to see Mick Taylor. In New York, for fuck's sake! 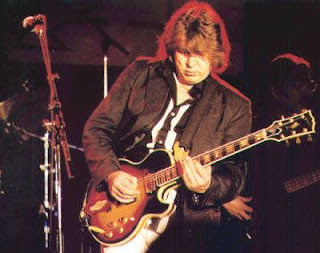 We caught a cab downtown and ate at a cheap Mexican restaurant in the East Village. But still got to the Lone Star Cafe just in time to snag one of the last available tables. The joint was starting to fill up as the support band, a blues outfit from Chicago, went through its final set. Our waitress reluctantly introduced herself. She didn't seem to like the look of us and it soon got to the mutual stage. My experience of the Big Apple is that it is NOT a friendly town. But we were prepared to peacefully co-exist with her. The Japanese couple sitting opposite were nice though, and we exchanged pleasantries with them until Mick hit the stage. Just as the guy was assuring me that "Everrywun rrliike Rorrrling Stonez."

Mick kept things pretty bluesy throughout his two excellent sets. And there were no complaints. The audience were way too cool to call out the names of Stones numbers. He played a couple of songs from his excellent eponymous 1979 debut solo album and I was rapt that the knowledgeable crowd reacted to these little-known gems. He even dipped into the Clapton catalogue with Key To The Highway. His singing was fine. Nothing to write home about but well-suited to the material.

And Mick Taylor played great guitar. His sound and his style were just beautiful. He's a really sweet blues guitarist and I suppose I'd rather listen to him cut loose than anyone. I heard recently that Slash rates him as a major influence (I'll update as soon as I track down a link for it) One thing that's always struck me about his slide guitar playing was that he seemed to do a fair bit of it in standard tuning, unlike Keith Richard who wouldn't use a standard tuning if his life depended on it. So it was tempting for rank amateurs like me to think they could go home and just churn it out like Mick. Fat chance.

When it was over, our waitress gave us the bill as perfunctorily as her service throughout the evening and we argued amongst ourselves about the tip. Suitably warmed by the drinks and the fact that I'd just spent an evening with one of my idols, I argued for ten percent, what I thought would be the base rate for tipping based on what I'd gleaned form the last few days in New York. They were either a cheapskate regular crowd at the Lone Star or she hadn't been making much in tips because she whooped and high-fived. She might have been taking the piss, but it was the first time she'd looked happy all night. Not like me.

During a break earlier in the evening, the guy next to me at the urinal said something that still haunts me. Nothing to do with size, you sillies. No, he mentioned that if I'd been there the night before, I would have seen Keith Richard on stage with Mick and his band. According to this bloke, Keith had strolled around from his nearby Greenwich Village home and got up and had a blast with his ol' Stones offsider. I thought the guy might have been mouthing off and didn't give his info much credence but bugger me if I haven't read of exactly what he described referred to in separate interviews with both Mick Taylor AND Keith Richard a couple of times since. Missed it by THAT much!

Mick Taylor performing with the band at around the same time as this gig occurred.

Wow that's just totally memorable.
Don't fret about not being there the night before - FFS - as I'm sure Taylor doesn't fret about not being in The Stones (he was too good maybe?)
Seeing a hot blues band in a club is a perfect night. much better for the music than stadium shows. Richards strolling in the night before, shows that he is probably envious of Taylor's being able to do something he can't. The stress of those stonking great mammoth tours must be vile. no joy like a close and appreciative audience: Taylor wins. and the Lad too.

FGMS:
Thanks for that. Yes, it was a night that sits well in my mediocre memory banks. When Bill Wyman left the Stones in 1994 the wishful-thinking runour went round that Taylor would return on guitar and Wood would switch to bass, a role he filled in the Jeff Beck Group. I so wanted to believe it.

I got a 'contact high' just thinking how happy you two were as you hit the street after the show.

Just in case you don't find time to check The Scrivener's Fancy,
I commend to you Mr. Tony Martin's Truly, Madly, Wheatley

(and the movie Bad Eggs was pretty funny too)

AOD:
Yes, the three of us were pretty stoked, I must admit. I've seen Taylor once since then - in 1990 at the Baxter Tavern but he wasn't up to much that night.

The Scrivener's Fancy is a terrific website - very distracting at work!

Mick Taylor's first album is another album I bought at the Wickham Sound Lounge around 1981.

AGB:
Must still puzzle you how they could have stocked both Mick Taylor and Warren Zevon in the Pilbara. Loved your Stand in the Fire review. Haven't heard much of Zevon but he sounds well worth checking out.