Some Classic Albums: The Good, The Bad & The Ugly III: The Ugly

Anthem of the Sun - The Grateful Dead: 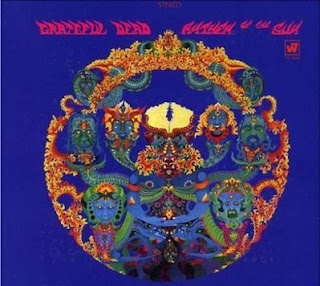 I gave a curious workmate a lend of this album not so long ago. He didn't think much of it. Me either. I told him I didn't know if I'd ever bother to play it again. This was the Grateful Dead's "psychedelic album". Back in 1967, everyone was doing it. Sgt Pepper's Lonely Hearts Club Band; Their Satanic Majesties Request; After Bathing At Baxter's. Y'know, months in the studio, plenty of drugs, finally free to express themselves meaningfully, music would never be the same again, etc etc.

And psychedelic rock is a sub-genre that I have a considerable soft spot for. Because at worst, even the ordinary psychedelic LPs still had at least two or sometimes three really good songs on them. But not Anthem of the Sun. 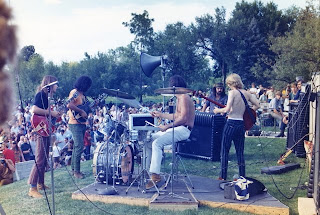 The Grateful Dead were unable to settle on a studio after finding facilities in New York and LA unsatisfactory and ended up completing the album in their hometown San Fancisco. Warner Records got very antsy about the time and expense the album was devouring. So the fractured nature of Anthem of the Sun's genesis is writ large in the quality of the material. Aimless, overlong jams pad out the album and I honestly couldn't think of one good song.

There are also a number of live tracks. I'm inclined to the view (and you can shoot me down for this if you like) that live tracks belong on live albums. The Grateful Dead's reputation as a great live band might take something of a tumble with a few listens to these tracks. And they sound like padding. I've always thought Goodbye Cream a terrible album due to its live-tracks padding.

Finally, after a few recent listens to this album, I was left with one huge unanswered question: where do you find the real Grateful Dead? They made their name during the psychedelic era, but this, their signature psychedelic album, is lousy. Their two most highly-regarded albums are Workingman's Dead and American Beauty, but these belong in the country-rock firmament and so their best stuff is actually a departure for them. I know, it doesn't make sense.

So I still think of the Dead as something of an enigma, one I haven't yet been able to unravel.

Anthem of the Sun at amazon.com - MP3 files and reviews 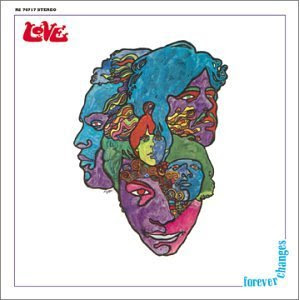 I normally try to steer clear of absolutism. So okay, I might like Bob Dylan a lot, but I can understand someone else not liking Dylan. The same goes for the Rolling Stones, the Who, Eric Clapton, you name it. If people just aren't that into them, I believe I can see where they're coming from. I really do. But not only do I not like the mid-60's Los Angeles-based Love's second album, I don't see how anyone could.

This is a stinking, steaming pile of complete shit. It sounds like a parody of self-indulgent, flighty, whimsical 60s music. I kept seeing it on those lists of the 20 Greatest Albums of All Time that kept appearing in the press during the 90s. And then, I shit you not, it came in at 40 on the Rolling Stone list of the 500 Greatest Albums of All Time!

I'm sure you can imagine that I bought this album expecting exciting new worlds to open up for me, as they did when I explored albums by The Byrds and The Doors. And it was a reasonable expectation, considering Love were one of the top bands on the LA scene during that seminal period from 1964-1966 that also gave rise to the Byrds, the Doors and Buffalo Springfield.

And like much of the output of that LA scene, Forever Changes is folk-oriented more than anything - but this isn't the kind of folk that Dylan might have generated. Nope, this is more the earnest undergraduate Poetry Major type folk, with mincing vocal stylings by Arthur Lee. Think Johnny Mathis. And then the lyrics are laid over atrociously annoying melodies and there's far too much in the way of strings and brass.

Redeming features? In short supply, but they include high production values - it's a much clearer, vibrant sound than anything Buffalo Springfield or The Byrds were getting on their records. Some songs display similarities to the kind of innocent trippiness that would be better realized a little later by star-studded British psychedelic band Traffic, so Love might even have been a little prescient. But they still sound like phonies.

So why is it regarded highly in some circles? Well, back in 1966, Love had the almost irresistable ultra-cool mix of black and white guys in the band. And they had two prolific and, it must be said, original, songwriters in Arthur Lee and Bryan McLean. I also think there were a lot of people making bets on the future of what would become rock music, and Love had all the trappings of the very now.
John Densmore said in his autobiography Riders On The Storm that he would rather have been playing drums with Love than the Doors. I had to reread this to be sure. Rather be with Love than The Doors?!? You've got to be kidding. He wasn't.

But look, it might well be that Love had a lot of fleeting LA street cred, but their music just wasn't substantial enough to make them sound like anything better than a fad.

Forever Changes at amazon.com - MP3 files and reviews
Posted by Lad Litter at 16:30

LOVE caught the wave too soon.
Barney Hoskyns wrote about them, that has to count for something.
I agree that the Dead Head thing is a mystery.

Can't agree about Forever Changes. Love it. But I never got the Greatful Dead.

M-S:
Forever Changes has really high production values and was roduced by their singer-songwriter-guitarist Arthur Lee, then only 22. The Dead mystify me. American Beauty is quite a pleasant album, but nothing to rave about.

Tony:
That's great that you like Forever Changes - what makes it work for you?

Sweet Methuselah on a tricycle Lad - the cobalt blue on the dark maroon background is doing my eyes in....!

but I never got the Dead Head appeal either. It all reminds me too much of the jazz improv that Spinal Tap were forced to do when Nigel Tufnel left in a huff....

dear Kath The Grateful CHOC Head that was a brilliant comment.

HL:
Sorry about that blue, Kath! I can't change the link colour to make it a less jarring combo. And yes, the Dead provided some good material for Spinal Tap!

What makes it work for me? No idea. I just like it. I try not to read anything into popular music, for want of a catholic (small c) term. 90% of it is complete rubbish, 9% is rubbish, the other 1% is probably rubbish, but it sounds good.

Tony:
I listened to Forever Changes quite a bit before this post. I still don't have any regard for it but I think I get why a great many people do like it...finally!