Some Classic Albums: The Good, The Bad & The Ugly II: The Bad 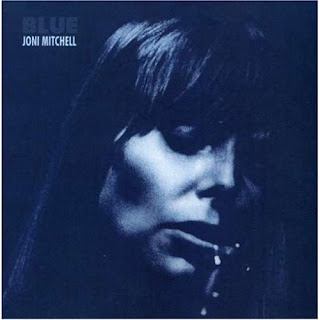 I hadn't heard much of Joni Mitchell's music. Just the 1971 hit Big Yellow Taxi and her version of Woodstock, which she wrote. Neither of which I was particularly enamoured of, but people raved about her, so I figured there must be something going on. Maybe there is, but I didn't find it with this album. Its formless and whimsical, like she's just piss-farting about. Don't get me wrong - whimsy can produce really good music. Just not in this case.

And yet, Blue was an almost instant critical and commercial success, peaking in the top 20 in the Billboard Album Charts in September 1971 and also getting to 3 in the British charts. 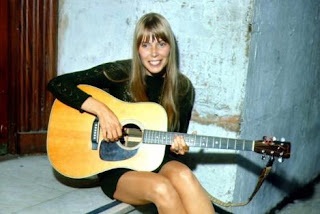 What I do understand about Joni Mitchell is that it might well be a case of some people getting her and some people not, with me firmly in the latter category. What I hear as shapeless, meandering quasi-melodies with what seems like two octave shifts in every line, others undoubtedly hear as well crafted, tantalizingly-structured, not easily accessible songwriting and unique singing from deep inside a beautiful soul.

But put it this way: if I was in charge of security at my local shopping mall and had to find a way to stop teenagers from hanging around, I'd be piping this album through the PA. 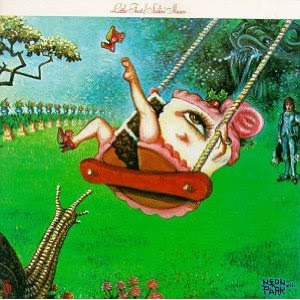 So many people I admired sang the praises of this outfit that I probably had unrealistic expectations. I thought maybe they might sound a bit like the Allman Brothers, or Atlanta Rhythm Section, or maybe Lynyrd Skynyrd. Or possibly even the Rolling Stones.

Little Feat recorded this album at Sunset Sound Recorders in Los Angeles, where the Stones' Exile On Main Street was being finalized in 1972, and apparently the two bands got along like a house on fire and traded a few licks during whatever down time the Stones' had. It was even rumoured that listening to Little Feat had influenced the songs on the "country side" of the Stones' double album, but this is very much unconfirmed.

What Sailin' Shoes sounds like to me is like an album of sub-standard outtakes from the Grateful Dead's country-rock period in 1969-70. I can't think of a single song that stands out as a really good track. The songs are lacklustre and unmemorable. Neither the country nor the rock really works and they certainly don't blend very well on this album.

But there's one thing about Little Feat that makes me not want to give up on them completely: the guitar playing of Lowell George. He is one of the greats of the slide guitar with a uniquely fluent, bluesy style. It's difficult to understand why he wasn't given more prominence on Sailin' Shoes. It might have made a few songs passable. His playing on a 1979 cover version of I Can't Stand The Rain from Thanks, I'll Eat It Here, his only solo album, is terrific. And on a cover of a disco song, for fuck's sake! 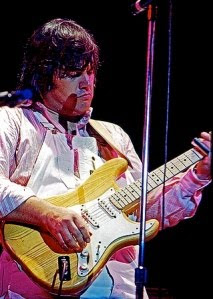 A great many players have cited George as an influence, particularly Mick Taylor, who started using a heavy spark-plug spanner after he saw Lowell playing slide with one.

I don't normally use this expression, but for Sailin' Shoes, it's the most apt description I can think of:

When I was a youngster all the "cool" people were buying, playing and raving about Joni Mitchell's Blue. My reaction then, now and all the time in between has been mechanically consistent: why?

Cool people have a lot to answer for.

You've been blogging up a storm! Have been really busy so have not been checking. Some of these music entries draw really nicely on your experiences. Cheers!

I second your Mitchell Motion!

I'm with you on Joni Mitchell. Perhaps I was too young to appreciate her when she was first on the scene?

Oh you've got to LOVE my word verification: CHURB.
Churb: to finally come out and admit that you don't 'get' whatever else considers cool. Yep, I'm a churb through and through!

My first thought on Joni Mitchell is of her titling an album with a Raymond Chandler - Phillip Marlowe
thought 'the only sound was the hissing of summer lawns" (as Marlowe drove up the leafy residential end of SunsetBlvd to General Sternwood's estate.
Songwise for me, not 'Taxi' but Both Sides Now. That has been covered by hundreds of performers and she would be rich if she had never written another thing.

If you want a brilliant contemporary of JM, look for LAURA NYRO her 'Eli & The 13th Confession' will slay you. It is late-night music, single malt time. Brilliant.

AGB:
I thought I might get the blog equivalent of tar and feathers for dumping on Joni Mitchell. I know she's much loved.

Ed:
Thanks, yes I've completed a few drafts from way back so it looks like I've been prolific. Not so. Looking forward to visiting the Wells again.

AOD:
Thanks for the tip on Laura Nyro - she's on my Complete Monterey DVD boxed set and Elton John cited her as a major influence when he appeared on Elvis Costello's music talk show. So I'm not surprised to hear she's good.

Little Feat is one of my faves but not the sailing shoes and similar turgid stuff. Try Oh Atlanta, Texas Twister and Let it Roll. Magick!

Phil:
Thanks for the details on good Little Feat stuff - I'll persevere, I think.

and of course this one

Critiquing musicians is always a risk because the fans can really go to the redline in defence of their favorites. Fortunately I am as musical as a brick and my musician friends are unanimous in the message that I am not allowed near instruments. My singing is the weapon of mass destruction that the US were looking for in Iraq. I like the noise that the talented people make though and do get into the depth of a performers experiences that create their individual noise taht is enjoyed or detested by listeners.
PS Thankyou for the comment on my blog it was much appreciated. regards Geoff Dening

Geoff:
Yes, I know what you mean about alienating fans. I know a couple of Joni Mitchell aficionadoes who would never speak to me again!

This was an attempt to have a look at some albums that appear to be sacred cows - point being there are quite a few "classic albums" around that sound pretty ordinary.

How's the comedy going? Any dates coming up?

"Richie Hayward, co-founder of the Little Feat, an eclectic jamband that maintained a strong cult following throughout the decades, has died.

Thanks Tony - his Guardian obit is at http://www.guardian.co.uk/music/2010/aug/13/richie-hayward-obituary

Phil:
That's not a bad clip. Thanks for that. Didn't look in the best of health, Lowell, did he?