TLOML's maiden name is Italian. In the Sicilian dialect from the area her dad comes from, it translates as box, or casket. But over most of the Italian peninsula it means protective head covering. This includes hoods, welding masks and helmets, particularly bicycle helmets.

She gets annoyed when I mention this. And if the three stooges want to have a little fun at her expense, they'll use her maiden name when talking about helmets or any kind of safety headgear.

Now, my family name is Scottish and Irish, and translates as someone engaged to establish or maintain a garden.

So when Curly informed us this morning that he needed a new bicycle helmet, TLOML thought for a moment and decided they'd better go get one tonight after school.

So I told Curly, "You couldn't be in better hands, y'know. If anyone's going to know how to get you a great bike helmet, it's the former TLOML Bike Helmet herself."

This got three big laughs. And a fourth, if you also count me laughing at my own wit.

"Yes, and it's lucky I actually live up to my name, as opposed to dad, who is useless in the garden despite having the near-perfect name for it."

This got even louder laughs. I didn't feel disposed towards helping the cackfest along any.

"You nailed me", was the best I could come up with as I slunk out the front door.
Posted by Lad Litter at 23:30 12 comments:

Things I Just Never Took To I: Horse Racing

Over at The Scrivener's Fancy a while ago, Tony Martin wrote a piece covering ‘Things That Everyone Else Is Into, But Which I Have No Interest In’. Have a read of it, sure. Just don't go on and on about how much funnier his article was than this one, alright?

This series is not one of those Grumpy Old Men-style rants about all of the things that piss me off. Fucking hell, you'd be here all night! No, this is more a list of things I just never took to. Things I feel a barely-disguised, hostile neutrality towards. Like Sweden's approach to Germany during WWII. Like every first date looked at me. I think we've gone about as far as we can go with the metaphors. 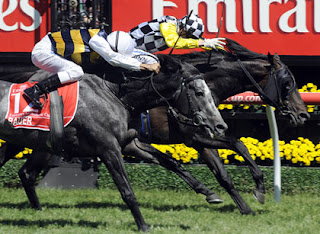 Horse Racing:
It used to annoy the absolute bejesus out of my 13-year old self that I had to endure every race form the Saturday Melbourne race meetings while I was waiting for the World of Sport Football Panel to come onto our black and white TV. Racing was a blocker. I'd made a half-arsed attempt to convince myself that I could get into it when the 50c mum put on Rain Lover for the 1969 Melbourne Cup paid $1.65 for a place.

But later that year, joining schoolmates from St Brendan's PS helping out at local stables in Flemington made me aware that horses put out a lot of shit. And the universal method of cleaning out their stalls was to do it with your bare hands and not complain. I wondered if a lot of horsy girls didn't have that piss-their-pants fixation with horses drop away completely at about the same point in the journey.

And it's not like there was any tyranny of distance, either. I grew up close to Moonee Valley, played football and cricket for the clubs that also bear that name, and include among my contemporaries many with a keen appreciation and significant weekly investments in the Sport of Kings. And for the last 22 years, Flemington Racecourse has been at the end of my street, for fuck's sake. Spring Racing Carnival? I'm almost oblivious to it. Hell, a lot of people who go are oblivious to it. 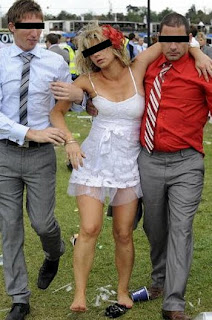 But do I actively dislike it? Well, no. But I do have one issue. It bothers me not a jot that rich, famous people have it so much better than everyone else. There's an extent to which I even think that's as it should be. Just in case I'm ever rich and famous. But I don't like the way the Spring Racing Carnival, and its press coverage, is so insistent about rubbing our noses in it. That's all. 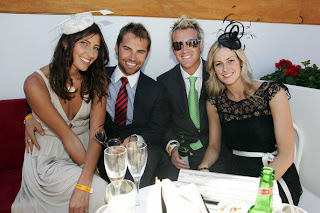