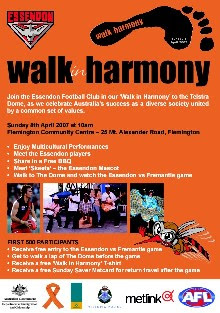 This is what I did today: Essendon FC organized a Walk in Harmony from Flemington to the Docklands with free admission to the Essendon vs Fremantle match at the stadium there. I don’t care who’s currently got the naming rights to Melbourne’s lesser stadium, it’s at the Docklands and if they don’t want to give it a real name, that’s their problem. However, when Laxettes get involved in footy sponsorship, I'll be the first to jump on board.

Anyway, the occasion found me strangely bereft of sons: Moe has eschewed footy because he wants to be the “different” brother, not the usual mindset for an eldest but he seems to know what he’s doing; Larry was in Echuca with some cousins; and Curly had overdosed on chocolate so it was just me, along with a good mate and his daughter.

Festivities kicked off at Debney Park in Flemington at 10am and we were treated to free sausages and some dancing and musical performances by indigenous Australian and African groups. All very pleasant on a Sunday morning. The occasion was part sponsored by the Dept of Immigration and Victoria Police, which was encouraging as they can often be characterized as insensitive where settlement of people from diverse backgrounds is concerned.

Our warm, generous football club handed out showbags containing bottled water, t-shirt, a train ticket home and club magazine. We set out along the Moonee Ponds Creek bike track in the direction of the Docklands. It was quite warm and a very pleasant stroll above the banks of this sadly neglected waterway was had by all. Essendon players walked too and stopped for photos and a chat whenever the opportunity arose.

Sigh! Don’t start me on what a beautiful, right-on, community-minded, look after their supporters-type football club Essendon is because for me, it’s a case of Essendon: How do I love thee? Let me count the ways…

Fucking Carlton and Collingwood (if they could be stuffed engaging in anything that wasn’t a guaranteed $$$$ exercise) would have made their supporters pay through the nose and then probably gone on and lost the afternoon’s match too. But not the Bombers.

Our boys who play this grand old game held on to record their second win for the season against a 2006 finalist. We will really put the shits up a lot of teams this year. I hope to be putting the shits up all of the opposition bogans who spent last year surrounding me in my reserved seat.

Oh, and here’s a tip: at Docklands, there are only a couple of gates where you can get outside to have a smoke. Gate 3 is one of them. The rest are closed and they’ve even fenced off the area so no-one can go round to some of the reasonably-priced non-AFL endorsed food outlets that ring the ground. Please tell me the ACCC will get involved in this.
I’ll have some photos posted and update just as soon as I can figure out how to email mobile phone images. Don’t roll your eyes! Not everyone knows how to do it. And once I’ve actually figured it out, I’ll be an expert and be able to post heaps more grainy, poorly-composed random-slice-of-life-photos on this blog. Don’t say you weren’t warned.
Posted by Lad Litter at 20:25

I don't get AFL at all, but that sounds like a nice thing to do for the fans. We have those type of days for League supporters too.
Do you support the Melb Storm?

Thanks, Steph. Hope you're better. To reduce the AFL-NRL dichotomy to its oversimplified pop-psychology essence: Men are from Sydney; Women are from Melbourne. I've developed a greater appreciation for NRL since Storm arrived and follow them in a pissy, half-arsed sort of way.