By the time we woke up on the Friday morning it was a little later than usual. We whisked Moe, Larry & Curly through their morning routines: eat all of your breakfast; brush your teeth; get dressed; no, you’re not wearing that to school; go back and really brush your teeth this time; have you got a hat? where’s the lunchbox you took to school yesterday? why haven’t you shown me the note about today’s excursion before now? and so on….

As comforting as all of this family togetherness was it left little time for TLOML and I to discuss what we were going to do about the news contained in the letter, but in a hastily snatched coffee on the back veranda we worked out that she would go to Tatts HQ straight after work and text me the simple message that would let me know what the prize was: 1.5 for $1500; 20 for $20000; 2 for $2m.

Trying to set my mind to work mode wasn’t easy but I managed to drop Larry and Curly off at school, bipping and waving to Moe as he sat at his bus stop on the way and even arrive at work at a reasonable time.

Now, I have not been enjoying my job at all this year and was thinking about chucking it in about three weeks ago. That would have been a BIG MOVE what with many years already invested in what could only grudgingly be called a career. And no prospect of a salary even remotely approaching what I currently earn should I decide to move on. So I’d forgotten all about other jobs and got on with it.

I didn’t want to spend that Friday considering that I might have a sudden good reason to retire early. I tried to calculate odds as I got closer to work: A 1 in 3 chance of any of those dividends. No, don’t be silly, the odds are formed by how many winners there were in each division, and there’d been hundreds in Third, around fifty in Second, and only two in First. Those were the real odds.

But work had actually been picking up. The last two weeks had been bearable to the point where I could see things turning around for me. I knew that matters sometimes slip back a little even when they are on an upward trajectory but Friday was more than just a small slide. Without going in to too much detail, it was a shitful day where it was all I could do not to tell quite a few people to just get fucked. But that would have taken career matters out of my own hands and into those of others. I got through to the 2:30 finish and waited for news.

While having a drink with colleagues after work, I drifted off occasionally and had to be brought back to the conversation. It should have taken TLOML around an hour to get in to St Kilda Rd, find a park, possibly wait in line and then get the news. That meant I should be getting a text from her at around 3:30. That time came and went. Unbeknownst to me, TLOML’s boss had decided that even though 2:30 was the finishing time, staff were still on duty officially till 3:30. So she couldn’t get away earlier. I resisted the temptation to ring her.

At around 4:30, my phone went off. With what could well have been a life-changing SMS. Here’s what it said: 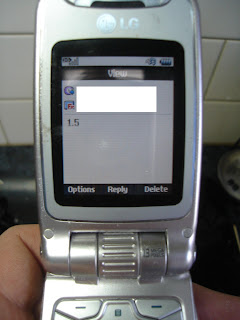