DNA might be unique but our appearances are less so. Our faces and physiques are made up of a myriad little bits and pieces that combine to make us look the way we do. So it follows logically that we might have a few of those features in common with many others.

And it would also make sense that if we were to have many features in common with an unrelated other, there might just be enough for a very close resemblance to be noticeable. 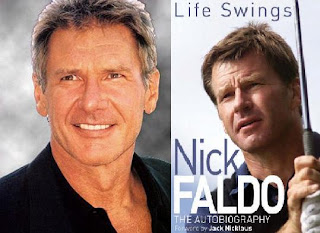 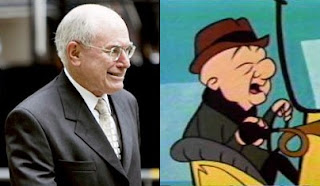 So when a mate emailed me recently with news that I have a double out there on the web, I wasn't surprised. He sent an attachment as proof. Unashamedly kidding myself by expecting to see an image of maybe John Malkovich, or some other not-really-good-looking-but-still-very-attractive bloke in the early stages of middle age, I opened it up.No such luck. Instead, my doppelganger turned out to be:

Hardy fucking har. I find this most offensive and objectionable.

Bauhaus 93 and Benguiat Frisky should NEVER be used together.

You know, I think in that Howard/Lizzie/Magoo pic, Mr Magoo looked more like the Queen.

You look absolutely nothing like the guy in that picture. But, look on the bright side. At least your friend didn't compare you to Mr. Magoo.

Poor LL. I'm sure you don't look a thing like that man in the picture. And for the record, when John Malkovich isn't playing pyschos, he's strangely attractive.

You've inspired me to post a picture of the cake one of my students made that is supposedly me.

Phishez: Our queer old dean, as Spooner might say. Keating once described Howard as having the vision of Mr Magoo but none of the good intentions.
Shelly: Oh, but thou dost flatter me. Did you ever see the Magoo series where he did literary classics like Cyrano de Bergerac and The Count of Monte Cristo? Not bad. And I know a few blokes who based book reviews on the Magoo version.
BC: I reckon that bloke's been sent a photo of me...and HE'S complaining! Saw the cake. You were the icing on it.

baldness is caused by an excess of the maleness hormone androgen ...

and women worry that their backsides look big.

Ann: Yes hmmm, and it bemuses me to see ACA or TT promos re claims of baldness cures. As if something that important would be exclusive to the tabloids. If baldness were ever to be cured it would be announced something like this: We interrupt the Prime Minister's address to the nation to bring you important news...

Aww I think you're cute! In a bald headed, middle aged, dad type of way ;)

Steph: I need to come up with a better way of fishing for compliments. And girl, your blogosphere family tree is starting to look a bit suspect, what with Daddy Lad and Uncle Fingers ;)