We’d flown sleeplessly into Sydney from Hawaii on the way home to Melbourne from a US trip and had plonked ourselves down on couches in the First Class Lounge. Now, don’t just assume that I sneaked in or had bluffed the doorman. TLOML and I had every right to be there. We were genuine First Class passengers, and had been right throughout the trip. And we were wearing the complimentary socks to prove it.

I’d won a trip for two to the US on the TV show, Sale of the Century. And first class air travel was part of the prize. I was sure this would be the one and only time at the pointy end of a plane, and so it has proved.

Anyway, back in the First Class Lounge at Sydney airport on this morning early in 1991 we were tired and thirsty so I headed off to get TLOML and I some juice. When I returned, there was a long-haired bloke sitting opposite TLOML with his back to me, talking volubly. She was smiling and nodding.

As I handed TLOML her juice he looked up and said g’day. It was Jon English. I sat down and we watched the cricket on a nearby TV, which was coming live from the West Indies. He knew a bit about cricket too. 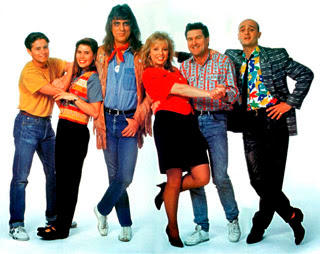 An ad came on for an upcoming TV show, The Flash. 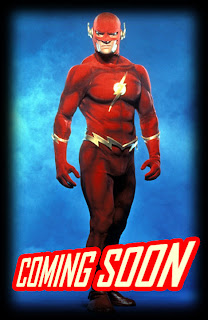 “You beauty” I said. And he gave me a bit of a funny look.
“I used to read those comics when I was a kid,” I explained.
“I’m still reading them,” he said. And he started telling me about how much he liked the graphic novel phenomenon, which had enjoyed a resurgence since the publication of Batman: The Dark Knight Returns some years before.

Well, we were off, the two of us. Leaving TLOML completely out of the conversation as only two self-absorbed blokes can, we talked comics, superheroes and their treatment on film and TV till the boarding call came. He was on his way to Melbourne to shoot episodes of All Together Now, his then series.

I asked him how his musical Paris was coming along as I knew he’d released an album the year before to see if the idea could grow some legs.

“One of two or three great stories,” he told me.

The link tells you that it was finally performed in 2003.

Our seats on the plane were a fair way apart so we didn’t speak again but I thought, well, that was nice. I met someone famous and had a really enjoyable conversation. Didn’t make a complete dickhead out of myself.

Now, TLOML is actually a fan of Jon English. With record albums and Pirates of Penzance ticket stubs to prove it. And has the hots for him, even. I worried that she might be just a little bit furious about the way we kind of left her out. I half-apologised, at the same time admonishing her for not having read superhero comics as a child, but she was quite serene about the whole thing.

“While you two were talking your boy-talk I just sat back and watched him and listened to him, the gorgeous hunk. You probably did me a favour.”

oh I loved that story.

PR - I saved her from being chatted up by Jon English, which is why I reckon he sat down opposite her in the first place.
BWCA - Some big comic names there. I've quite enjoyed the Marvel comics movies, particularly the Hulk, Fantastic Four and the Spiderman series. Wonder what Jon English thinks of them?

I have a bit of an older-man crush on Jon English. Him and John Waters.

BC: The two go together, don't they? I think TLOML is inclined similarly, but in her case it's a not-that-much-older-man crush.

Qantas lounge- Bert Newton WITHOUT his wig. If only I had the balls to take a pic, I could have made some money from NW magazine.

Steph: Bert Newton wears a WIG?!? Well blow me down. I thought he had a GM hair transplant. Worth a post, Steph.