Great Gigs I: John Mayall and the Bluesbreakers; the Chevron; 1982 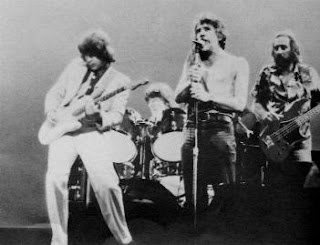 When I first heard late in 1981 that a reformed John Mayall and the Bluesbreakers lineup were about to tour Australia, I was absolutely rapt. A visit by one of the key influences on the British blues scene of the 60s was no small matter.

For non-aficionados, the Bluesbreakers were a proving-ground for a host of brilliant players who would establish ironclad blues credentials in the Bluesbreakers and then go on to greater fame in other groups: guitar players Eric Clapton; Peter Green; and Mick Taylor; bass players Jack Bruce; and John McVie; drummers Aynsley Dunbar and Colin Allen.

For devotees, it didn’t really matter what lineup was current, John Mayall was a fabulous multi-instrumentalist writing and arranging driving force, responsible for the core sound and feel of the group.

Like many, I’d sought out albums like: Bluesbreakers, A Hard Road; Crusade; and Blues From Laurel Canyon to get in touch with earlier influences and incarnations of those stars of the late 60s blues-rock scene.

And in doing that, I became a fan of the Bluesbreakers, not just an admirer of prominent individuals within the group.

The lack of publicity and coverage for this tour by such famous names was disappointingly scant. No, they didn’t get on Countdown, and I can’t remember much press coverage beyond the odd radio grab and tiny newspaper article. Just enough to know they were here and where they were playing and that’s all.

And it’s funny to look back at how these blokes were viewed in those days. They were rock and blues veterans, old-timers. Which makes it interesting to consider their ages at the time: Mayall 49; Taylor 34; McVie 36; and Allen 39. Hardly dinosaurs by today’s standards, especially when you remember that the still-touring Stones are all in their mid-6os.

They were doing two gigs in Melbourne: the Chevron in St Kilda; and the Pier Hotel in Frankston.

The four of us were all still living at home, so we had to bong in the car on the way, pulling into side streets so the driver could have his go. Somebody had forgotten to bring water for the pipe, so we used Coke. Now, don’t get excited. Coke A COLA. I didn’t mind the fizz but my mates hated it. I started to feel paranoid. They weren’t genuine fans of the Bluesbreakers, either. Maybe they’d want to leave before the finish just to piss me off.

The mood calmed when we tried several times to stockpile the smoke in the car and then open one window so that the smoke would pour out in a stream as we drove along. It was lucky our arrival at the Chevron stopped the arguments about airflow. Then we argued about parking.

Inside the Chevron, there was a big buzz of anticipation before they took to the stage. The crowd was overwhelmingly male, and there seemed to be almost a gestalt thing happening. Like we belonged to an exclusive club who knew blues like nobody else and were about to have some hopes realized by seeing and hearing some of its greatest exponents.

Mick Taylor was very dressy in a brown silk shirt with matching cream tie, jacket and trousers. Seven years later, he was to wear the exact same outfit at the Stones induction into the Rock n’ Roll Hall of Fame. So we have one thing in common, Mick and I. We both wear clothes until they fall off us. John McVie continued in his range of homeless beachwear made famous in Fleetwood Mac; and Mayall wore a silk jacket which later came off to reveal an almost-buffed physique in a blue singlet. 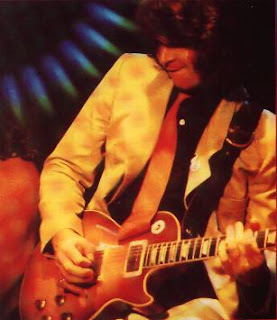 The welcome they got from the crowd was loud and loving and made the hairs stand up on the back of my neck, spreading to an all over rush. Now, I thought these blokes were great. Really admired their musicianship. But I was starting to get an insight into what I thought girl fans might feel at those piss-your-pants-hysterical pop concerts.

I turned to my mate and said emphatically, “Hey I think I just had like, I dunno, a female orgasm or something.”
“Fuck off,” even more emphatically.

The set was a mix of Bluesbreakers’ old and new, the back catalogue represented mainly by songs from the 1967-69 period, roughly when Taylor, McVie and Allen were last members of the group.

They went through most of the numbers that would appear on the soon-to-be-released albums, and a couple of old timers like My Time After A While and Have You Heard.

I stood on tiptoes to get a longer view. Taylor had strapped on a red sunburst Gibson Les Paul, of which I had a cheap Ibanez copy sitting at home. His playing was all that I expected it to be: Claptonesque? Sure, but with a different kind of fluidity and his own set of blues licks. He seemed to play everything soulfully, including the now-soaring, now-stinging slide guitar passages, but with a kind of sweet aftertaste. His playing was very similar to how I remembered it from the Rolling Stones film, Ladies and Gentlemen: The Rolling Stones.

John McVie played pulsing bass lines, with a nice bright sound that cut through, and gave Colin Allen plenty to work in with, and space to play around the beat with rolls and triplets.

But Mayall was the master. He played blues harp really energetically and in a range of different blues styles, quintessentially authentic, with all the wailing and chugging in the right places. And not too much repetition.

He did a stint on keyboards, a couple of songs with an acoustic guitar strapped on, and sang up a storm through it all. But he was without doubt the best band frontman I have ever seen.

You’ve got to remember that this was a crowd that had come to see British Blues’ pre-eminent elder statesman. We all expected to be impressed by his presence, but he went much further than that. He was charming, charismatic, and reached out to the audience as fellow blues devotees. Like we were all mates. You could imagine him having this effect everywhere: in London; Chicago; the Deep South; you name it.

Okay, there’s some purple prose north of here, but this was a great gig. They could have done encore after encore until daybreak as the audience didn’t stint on the appreciation. And when they finally did leave the stage, we’d all had a seminal musical experience.

There was a lot of love in the room that night.

I woke up this mornin'
felt like I'd missed a Mayall show ..

Yeah I woke up this mornin'
I knew I missed that Mayall show.

You can beat time, but you cannot beat a good 12-bar.

The audience was somethin' else as well.

The wide Pacific cheats Australians out of seeing subtle performers in the small rooms that show them best.

AOD: This post was never going to attract the younger demographic, so thanks for stopping by. One other post in the Great Gigs series is from a US club date.