Sgt Pepper's Lonely Hearts Club Band: The Beatles
This is the latest in a series of posts where I take a look at a classic album and explore what-might-have-been if contemporaneous single releases had been included on that album's track listing. So far, I've talked about: Rubber Soul; Highway 61 Revisited; and Revolver.

Sgt Pepper's Lonely Hearts Club Band is a hell of an album to be piss-farting about with but I think it needs it. In previous posts in this series, I've been at pains to stress that the albums discussed are already super, but that adding one or two kick-arse songs would make them well, super-duper. However, in Sgt Pepper's case, the additions would be a necessary improvement. 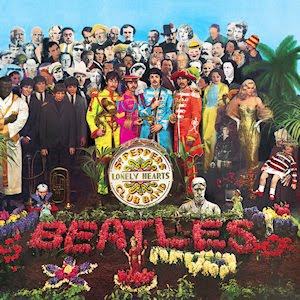 Let's be frank, shall we? I don't think there's any doubt Sgt Pepper's was a ground-breaking, watershed album that both led and followed what was at the cutting edge of rock music in Britain and the US around its 1st June 1967 release date. The depth and detail in the recordings and the innovative blend of what would be categorized as baroque pop and psychedelic rock was nicely mirrored by the album's phenomenal gatefold cover. Up until that point, most LPs had a colour image on the front cover and then reverted to black-and-white for the back. No-one explored the idea of album covers as art, much less pored over them for hidden meanings, as happened after Sgt Pepper's.

It was also much-much-anticipated, coming some 10 months after the Beatles' previous LP release, Revolver. This expectancy was even more pronounced than the usual buzz around what the Fab Four were going to come out with next, due no doubt to the knowledge that the Beatles were spending an inordinately long time putting the record together and had hinted that the new record would be different from anything that had come before it.

And so it was. This would be the first "concept album", informed by McCartney's central thesis that it was not so much a new LP by the Beatles as an album by the characters they invented, from which the album took its name. A charming idea, and one that is realized especially by the first two tracks. So all of the songs were designed to fit in with this theme, that the album was a performance by this group Sgt Pepper's Lonely Hearts Club Band. So the record is ostensibly filler-free, with each song essential to the narrative. Think rock-operas like The Who's Tommy and Pink Floyd's The Wall.

The only trouble with that is, you invariably have to put up with a lot of songs sung in silly character voices. And for me, although the album hangs together nicely as a whole, and contains great songs like: the title track and its double-time reprise; Lucy In The Sky With Diamonds; Getting Better; Lovely Rita; and A Day In The Life, there are a few that stray too far from the Beatles' sound for my liking, such as: With A Little Help From My Friends; Being for the Benefit of Mr Kite; She's Leaving Home; and When I'm Sixty-Four.

And this is not me trying to be an iconoclast just for the sake of it. For all that's been said and written about this album, it would be a new shade of superb with the addition of a couple of handy Beatles tunes released as a double-A sided single at around the same time.

Strawberry Fields Forever; Penny Lane
This double-A sided single, released three months before Sgt Pepper's, contains two quintessential Lennon and McCartney songs, the former written by Lennon and the latter by McCartney. These are intensely personal songs of a nostalgic nature that would not jar with the album's overall theme.

Strawberry Fields Forever started out as an acoustic guitar demo that everyone in the Abbey Road studio loved instantly when Lennon played it to them. The real Strawberry Fields was a Liverpool Salvation Army children's home with a garden that Lennon had played in as a child. The muted vocals are suggestive of a child's cry and the almost-nonsense-verse lyrics are designed to obscure the impact on Lennon of recent upheavals like the Bigger Than Jesus shitstorm, his marriage breakdown and LSD use. The songs haunting mellotron intro, combined with a languid melody and ominous orchestration evoked what George Martin described as a "hazy dreamworld". 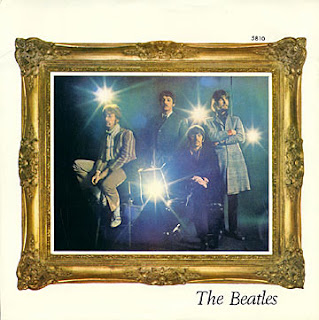 Penny Lane has always struck me as sounding like a really good children's song. Its lashings of warm nostalgia for Liverpool (specifically, a Liverpool bus terminus and surrounds) makes it the song that caused untold street-sign thefts. The imagery conjures a rich cast of eccentric characters and the enigmatic musical structure (ie "very strange" and "meanwhile back" to come out of the chorus) make it one of those "loved by all ages"-type songs.
Indeed, producer George Martin thought this double-A side The Beatles' finest single. The inclusion of these songs on the Sgt Pepper's album would have augmented and enhanced it.

So Which Tracks Would Miss Out?
With a combined running time of 7:08, the two welcome additions could only come in at the expense of one other track, otherwise the 39:42 running time of the album would go over the 45min limit I've stipulated for this exercise.

There are no standout candidates for worst track on the album as such, but When I'm Sixty-Four has always got on my nerves. So off with its head. There, that's better.
Posted by Lad Litter at 13:21

I have forgotten if McCartney got a lot of silly flack for the song when he actually did turn 64.
You are spot-on with your other 3 odd tracks too. At the time they had no appeal to soppy Beatle-y fans.

and now of course, we all really do know all that "oh no Strawberry Fields is not about drugs" was rubbish. Paulys offstage life was the absolute opposite of his moptop cuteness.
Paperback Writer is my alltime Beatle#1

AOD:
Thanks as always. I think Paul did get some commentary on turning 64 back in 2008. This excellent article, for example:
http://www.nytimes.com/2006/06/16/arts/music/16cnd-paul.html?_r=0
I'm with you on Paperback Writer too - a vastly underrated Beatles song.