Rolling Stones Their Satanic Majesties Request: We Love You; Dandelion
This latest post might make the series a bit like the law of diminishing returns. I don't think Sgt Pepper's is anywhere near The Beatles' best album, and this Stones' LP is the first album not generally regarded as a classic to receive the Lad Litter track listing makeover. However, this is the only album that would find itself transformed by the addition of two songs from a contemporaneous single release. 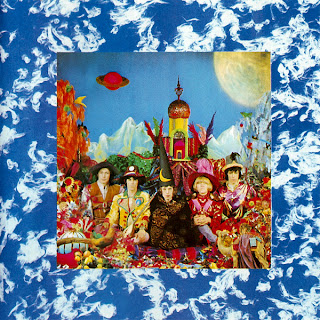 It's not a stretch to describe Their Satanic Majesties as a disappointment. The Stones ended up producing the album themselves after Andrew Loog Oldham, their Svengali-like producer-manager, threw in the towel early on during the aimless, indolent sessions. In a foreshadowing of what was to occur during the making of the Jimi Hendrix Experience's Electric Ladyland in 1968, the Stones used the studio as party central, all hangers on and good times, when they showed up at all.

There was the February Redlands drug bust that saw Mick Jagger sentenced to three months in jail for being in possession of tablets only available on prescription in Britain, but which he'd purchased legally over the counter in Italy and then left in a jacket pocket. Keith Richard copped a whole year for allowing his premises to be used for the consumption of marijuana. These convictions were subsquently quashed on appeal, but it was a scary time.

And not to be left out, Brian Jones was convicted and fined when a May 1967 police raid discovered marijuana in his London flat. To make matters even worse, Jones' girlfriend Anita Pallenberg ended up leaving him for Richard during a decadent Moroccan holiday, heightening tensions within the Stones. And like The Beatles 12 months before them, it was the year they announced the taking of an extended break from touring. As Bill Wyman observed in the documentary 25 X 5 (1988): "With all the things that were going on, it's a wonder we put any music out at all, really." 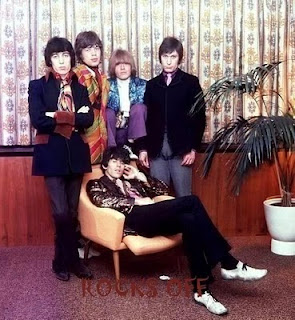 While all of the high legal drama was being played out, the Stones' US label, London Records, released the hastily assembled compilation-outtake collection Flowers, so that the public wouldn't be starved of product while Their Satanic Majesties took shape. The Who even showed admirable solidarity by releasing a cover of The Last Time to keep the Stones' music in the public eye.

As a result of the success of Beatles albums like Revolver and Sgt Pepper's, more attention was being paid to LPs by both artists and the public by this time. So much so that 1968 would see albums outsell singles for the first time ever. To reflect this, Their Satanic Majesties became the first Rolling Stones album with uniform track listing for both the UK and US markets. Finally, in December 1967, 10 months after recording had begun, the album finally saw the light of day.

But after all of the factors affecting Their Satanic Majesties' genesis had been overcome, the Stones had really only caught the tail end of the boom. Other groups had already put out psychedelic opuses in the wake of Sgt Pepper's June 1967 release: The Grateful Dead's Anthem of the Sun had been in the shops since July; Jefferson Airplane had beaten them to the punch by a whole fortnight with After Bathing At Baxter's; Cream's Disraeli Gears came out in November; and even The Jimi Hendrix Experience with Axis: Bold As Love managed to sneak in a whole week ahead of The Rolling Stones after Track records delayed their second album's release.

Although Their Satanic Majesties initially reached 2 and 3 on the UK and US charts respectively, sales nosedived from there as bad reviews and word of mouth took its toll.

I've always loved the cover, the Stones' first gatefold. In fact, it wouldn't surprise me if quite a few sales were made on the basis of the cover alone. Okay, it's obviously inspired by Sgt Pepper's and it's true there are many similarities: the extravagantly-costumed Stones facing the camera; fantastic technicolour backdrops and props; and hidden artwork like Beatles faces visible in the foregrounded foliage. The inside cover is a very busy montage of almost every possible motif that could be construed as psychedelic, including a maze that can't be navigated, while the back cover employs a tapestry-like design. Rare early versions of the front cover included a 3-D version of the photograph, but this was soon scrapped after printing proved too expensive. 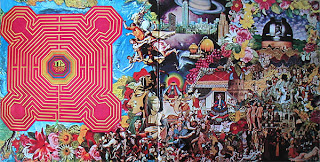 In essence though, Their Satanic Majesties is truer to the spirit of psychedelia than Sgt Pepper's, which drew on a wider range of random influences. However, its unevenness in production values, performance quality and material make it pale by comparison.

Brian Jones plays an extraordinary range of instruments across all ten tracks, (mellotron; organ; electric dulcimer; recorder; percussion; piano; theremin; sitar; and [presumably] guitar in there somewhere too!)  and this would be the zenith of his status as a multi-instrumentalist. The overall sound of the album is saturated with his contributions. However, even he hinted in a Jan 1968 interview that the album was very hastily completed in the final month before its release.

So it was probably inevitable that there is a lot of dross on the album: Sing This All Together and it's eight-minute reprise; the mockney vaudevillian On With the Show; and the shapeless Gomper must have seemed unintelligible to Stones fans back in the day, and they haven't weathered well either. Much early commentary was critical of the Stones for "selling out" to the latest fad. Jagger himself lamented in a 2003 interview that Their Satanic Majesties was an unhappy by-product of the Stones having too much freedom, too much time on their hands: "believing everything you do is great".

But as with much of the music of the psychedelic era, the good stuff is mind-blowing. For starters, the album contains two fabulously iconoclastic Stones songs that do a lot more than just fit the psychedelic groove: She's A Rainbow, with Nicky Hopkins' music box piano riff, complementary child-like harmonies sped up for effect, and backwards string arrangements courtesy of John Paul Jones; and 2000 Light Years From Home, a haunting space-rock song that authentically evokes colourful yet desolate science fiction fantasies in both form and content.

Of the other tracks, Citadel comes closest to a straight rock song with its bluesy riff and crashing chorus, while In Another Land is the only Bill Wyman composition and lead vocal to ever make it onto a Stones album - and delivers more than just curiosity value - there's a baroque feel overall with tinkling harpsichord and a surprisingly catchy chorus. 2000 Man has a strong folk-rock sensibility and probably deserves better than to be buried on an album that even Stones fans wouldn't play regularly.

However, over at Psychobabble, there is a comprehensive track-by-track analysis of the album that, dare I say it, leaves no Stone unturned.

So if there was ever an album that needed a quality infusion, it was this one. And their double-A side single release from earlier in the same year could have provided it.

We Love You; Dandelion
This August 1967 release was designed to be a thank you to fans of the group, who had been very supportive during the Stones travails at the hands of the wicked Establishment. With a manic opening piano riff that represents Nicky Hopkins' debut on a Stones record, We Love You betrays the Moroccan influences on Brian Jones' mellotron playing that were evident through much of Their Satanic Majesties. The song also features jailhouse sound effects and uncredited backing vocals by John Lennon and Paul McCartney. According to Lennon in a 1968 interview, We Love You is the Stones' equivalent of the Fab Four's earlier All You Need Is Love. 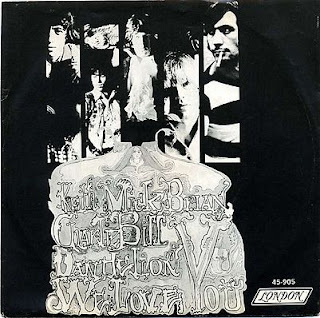 Although We Love You charted well in the UK, its flip side Dandelion was very much the A-side in the US. Dandelion was recorded late in 1966 and so predates the Satanic Majesties sessions by a few months. It always struck me as a follow up and companion piece to Ruby Tuesday and a precursor to She's A Rainbow, with its nursery rhyme lyrics, high harmonies and overall baroque feel. It must have had a significant influence on Keith Richard, who would soon after name his daughter Dandelion. She would later opt for the less trippy Angela in adulthood.

So Which Tracks Would Miss Out?
The album is 44:06 in length. We Love You and Dandelion come in at 4:35 and 3:32 respectively, putting them way over my self-imposed 45-min limit. Seeing as how Sing This All Together (See What Happens), is 8 minutes and 33 seconds of complete crap, it can take a powder with no harm done.
Posted by Lad Litter at 11:28

Interesting post, Lad litter. While I obviously have a lot more affection for 'Satanic Majesties' than you do, I'm always glad to see it receive more analysis than the usual flat-out "It's shit; listen to 'Exile on Main Street' instead" criticism.

Thanks for dropping by Mike! If your stats counter shows someone going right through the Psychobabble archive in a couple of sittings it's not a creepy stalker, just me.