Yes, the third in a series that adds artists' hit singles left off their contemporaneous album releases and looks at the likely ramifications. Sorry folks, but it's kind of for fanboys only. 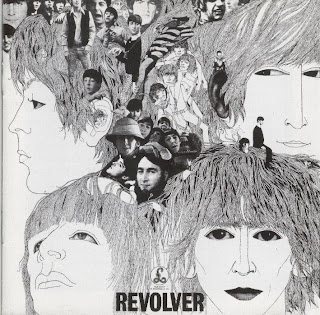 It's a tough choice, but this August 1966 release is my favourite Beatles album. And I'm not going out on a limb there either: you won't meet anyone who doesn't at least like it a lot; and Rolling Stone magazine placed it at 3 on their 500 Greatest Albums of All Time list.

All that said, it's a fantastic collection of songs and hangs together beautifully. The US version differed from the UK and Australian LP releases in two key ways: three John Lennon songs, I'm Only Sleeping; And Your Bird Can Sing; and Doctor Robert were all left off in its stateside form. And the US mix gave you a stereo separation that put vocals and a small amount of instrumentation on one side exclusively, with the remainder on the other side. Sounds weird, I know, but I really liked that dichotomy between left and right, and the separation suited the material. The CD re-release mixed it in a much more orthodox way and seemed to sacrifice the immediacy of the original.

The album represented a consolidation of what the Fab Four had started on their previous LP release, Rubber Soul: multi-tracked overdubs; sound effects; backwards guitar; a plethora of unusual influences; and additional instrumentation beyond what the Beatles could provide themselves. And the enigmatic cover, with its combination of photomontage and line drawings, was probably the first album cover to be pored over in search of hidden meanings.

It's been described as the first psychedelic album and that is arguable. I'm inclined to think of it as more of a proto-psychedelic album - the kinda trippy one immediately before the really trippy one. It opens with what was George Harrison's most exciting composition to that time, Taxman. Straight away you know you're hearing something special – the production values are bright, clear and timeless and the sinewy guitar lines echo those of the Paul McCartney song Baby, You Can Drive My Car from Rubber Soul.

Next up is Eleanor Rigby, with its Psycho-influenced string quartet backing - a stunning blend of form and content that made the music “establishment” really sit up and take notice of the Beatles’ creative abilities. I’m Only Sleeping is a wonderfully dreamy John Lennon ballad and Here, There and Everywhere is as lovely as anything McCartney has ever done. There’s a dark edge to Lennon’s She Said, She Said, commonly thought to have been inspired by a girlfriend of Peter Fonda’s, who took acid with the group during some down time in California and kept saying over and over “I know what it’s like to be dead...”

McCartney segues from the likely lad style of Good Day Sunshine to the poignant For No One and then George manages to squeeze in a third cut on the album with the Byrds-influenced I Want To Tell You. McCartney's Got To Get You Into My Life has always sounded rather Broadway to me but it's Lennon's album closer, Tomorrow Never Knows, that has become the album's signature track. With lyrics based on the Tibetan Book of the Dead and a droning, modal, raga-like feel, this song boasts sound-effect loops that were played like keyboards. Most listeners are surprised to learn that it stays on a C chord for its entire duration. It's been cited  as a profound influence by many mid-60s luminaries including Roger McGuinn and Jefferson Airplane as a liberation from the tyranny of the three-minute hit single.

So, how is it then that someone's favourite Beatles album could possibly be made even more favouriter?

I'm so glad you asked: 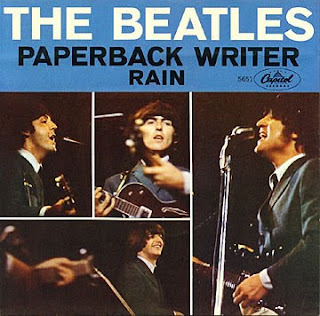 The Beatles' May1966 single release Paperback Writer opens with a killer guitar riff and an incoming bass run that should put any doubters straight about what a great bass-player Paul McCartney is. Paul's fast-paced lead vocal is augmented by John and George's high pitched Frere Jacque vocal inserts. The song's genesis is believed to have been inspired by an aunt of McCartney's who asked him "Wha doan't yew do one that's not about loov lahk all the rest?"

Rain is a hidden gem among Beatles songs that would sit nicely with all of the other surprises on Revolver. Lennon wrote it as a counter to constant complaints about the weather - and cited Melbourne's wintry blast on their 1964 arrival at Essendon airport as a catalyst. And just to make things a little interesting, it has backwards vocals and deceptive tempo changes.

﻿
So Which Tracks Would Miss Out?

None - even with two additional songs, Revolver's duration stays under 45 min
Posted by Lad Litter at 12:05

Thanks for this, LL. It's always been my favourite album of theirs too but you've explained why so much better than I can.

yep what Kath from Genevre said.
The album's omnipresence coincided with the best phase of my teen life and I love every beat of it's heart.
Paperback writa!

Kath:
It seems to be much-loved all round. I'm re-watching Beatles Antholgy on DVD at the moment - nearly up to Revolver - what a fabulous documentary.

AOD:
Thanks. Long time between drinks - all my fault. Just out of interest, did you have the LP version with the stereo separation?

it was probably MONO and I wish I still had it. 52/6 from Ultra TV & Sound in Balaclava near the bank where I worked.
"I Am Waiting" from Aftermath - Jack Nitzsche all over that record and Brian Jones, at his very best - just the beginnings of Revolver psychedelics."

Thanks as ever MS. Was that £2 10s 6d then? So you paid full price. I would LOVE to have that stereo separated version on CD - that would be perfect! Dunno if Aftermath is going to make it onto my LP-to-CD conversion via digital turntable list. Out of Our Heads did.

A brave project, improving on perfection.
I never knew Rain could be traced back to Essendon - it's not often someone can tell me something new about the Beatles.

I can see Rain on Revolver, but wonder if Paperback Writer fits in better with Rubber Soul.

Thanks Bill. Even though the WIkipedia entry for Rain stipulates a wintry Essendon airport arrival as the song's inspiration, watching the Beatles' Anthology the other night showeed the Fab Four struggling with inverted umbrellas during the squall that greeted them at Mascot.

The next instalment will feature Sgt Pepper's.

My favourite Beatle album too. I reckon For No One is simply exquisite - in fact the second side. And Your Bird Can Sing - can you play it?

Rain - wasn't Ringo on drums 'cos he got sick or summat, they got some other geezer for the tour? Or just the song? Can't be bothered googling.

Thanks Phil - can't play And Your Bird Can Sing but what an exquisite album - it's one of the few of mine that I can put in the car CD on long trips that TLOML won't complain about.

Jimmy Nichol replaced Ringo on the Aussie tour 1964 until the Melbourne concerts.