*An edited version of this little piece of smart-aleck-ery has also been posted at satirical football website The Daily Maggot.

Carlton supporters have been urged to ensure they act responsibly when disposing of membership cards in the wake of Sunday’s dispiriting 69-point loss to Adelaide. In an unprecedented joint statement released to the media last night by Clean-Up Australia; the Australian Conservation Foundation; and the Australian Council of Social Services, significant community groups have joined forces to avert the potentially disastrous environmental fallout from a spontaneous event that now embarrassingly overshadows themed rounds in the AFL’s pantheon. 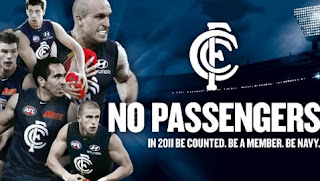 “We were ready to be proactive when the Blues were defeated by the Bombers in Round 4," the statement read, "but fortunately for the environment that 30-point loss was misinterpreted by Carlton people as a one-off and so didn’t have the usual triggering effect it did during 2008-10. But now that Carlton’s hubris has been confirmed as entirely misplaced after successive defeats at the hands of St Kilda and Adelaide, we don’t want charity bins and inland waterways clogged with tonnes of navy blue plastic.” 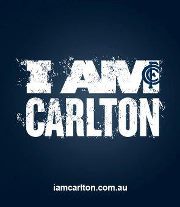 Carlton CEO Greg Swann confirmed that additional casual staff on well-below-minimum wages would be ruthlessly exploited to deal with the expected deluge of lost and damaged card applications when Carlton’s fortunes take even the slightest upturn. “The AFL have reminded us of the need to be proactive on all levels about this sort of thing, and we have been,” Swann said this morning. “For example, in anticipation of a loss to Melbourne next week, not only has our major sponsor VISY seen fit to divert funds from Chris Judd’s under-the-table payments to research and development into sustainable membership card recycling solutions, but flying squads of trained counselors will be stationed around the ground to deal with any depression hot-spots..”

However, a spokeswoman for the Beyond Blue Foundation denied any involvement. “Look, apart from their annual begging expedition to have us come on board as major sponsors, which we strongly suspect might end up involving us in money-laundering, we haven’t heard from them at all. So in all likelihood, they’re just skirting around the edge of the issue. Like their midfield.”
Posted by Lad Litter at 10:22

My husband will LOVE this - he's an one-eyed Adelaide Crows fan who has been getting glimpses of the victories via a delayed podcast. Brilliant stuff!

They are in fierce form at the moment, those Crows. There's nothing quite like a big win and the knowledge that the vanquished will be mercilessly satirized. Unless it's your team on the receiving end. Then it's cruel.

doesn't read like satire from where I stand on football. sorry.

AOD:
No, well, it wouldn't, would it, if it's your team? If you check out the site you'll find it's chocka with pieces taking aim at all sorts of targets eg Ricky Nixon Mangement Deal Nets Him 20% of Player Scandals etc

Odyne has no team and that's her problem. She was, however, nicknamed Jezza for Alex*Jesalenko of Carlton, in 1965 where she worked. Her entire experience of AFL is 1. seeing Collingwood v Essendon in 1964 and ray gabelich stood on her, 2, being in the members at the GFinal West Coast v Ablett Snr, and 3. being on the MCG at night alone when empty (which was fabulous - the ghosts could be heard).
She also used to watch World Of Sport on Ron Caseys football channel and League Teams late on Thursday with recipes from Lou Richards.

Ah, so she's an agnostic. They perform a very important function in Vivctoria: namely, keeping those of us who are keen on footy grounded. It really sin't all that important.

I heard she got the Jezza nickname courtesy of a penchant for navy blue socks back in the late 60s (and a graceful way, I'm betting). You know, something in the way she moves.

Lad, it's time for another blog and I've tagged you for a meme - http://blurbfromtheburbs.blogspot.ch/2012/06/it-goes-all-way-up-to-eleven.html