The Thin Envelope I

Our boys, Moe, Larry and Curly range in age from 14-18. They’re good lads, as they say. Show me a teenager who doesn't cause issues for his parents in some way and I'll show you a teenager who's been replaced by an alien clone. But there's plenty about them to make a parent feel greatly relieved: they don't hang around with dickheads; if their mates act like knuckle-draggers, as they do now and then, they don't join in; and they have loving if occasionally humourously adversarial relationships with parents and siblings.

In short, they haven't given their folks even a skerrick of the hassles their dad caused for his parents. For that alone, I'll always consider myself very fortunate. Okay, they’re inclined to be bone lazy when it comes to study, but there are swings and roundabouts.

However, let's just pop into flashback mode for a bit and check out what their dad was up to at around the same age... 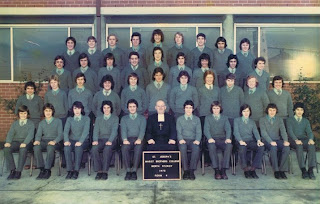 The end of a fairly eventful school year was coming up. My inner suburban Catholic boys' school was experiencing some of the cooler days that had been the signature weather pattern of that November in 1975. What was hotting up though was anticipation: we were counting down the days to the school holidays and quite a few of our Form Four class were already aware that they wouldn't be coming back.


Some had secured apprenticeships, including a couple of good mates of mine, while others had opted to seek educational opportunities elsewhere. Guys who in some cases jumped before they were pushed. Because as the school's higher-ups had been stressing all year, there was going to be something of a cull at the end of Fourth Form. Quite a few of us would not be taking our place in the senior wing for 1976, as the school's administration had droned on and on to us during the year.

There was nothing for me to be apprehensive or even mildly concerned about though, I reasoned. Maths and Italian I'd written off at around the mid-point of the year as not being worth my energy, so I'd almost deliberately failed them. But there were As in English and History and a mix of Bs and Cs for the rest. Alright, teacher comments indicated a lack of effort and application but overall I thought it was a nicely balanced report. And that might have been the problem: I had very limited reasoning powers. No fucking idea, in fact.

Although self-conscious, I wasn't self-aware, so I thought that my place in the scheme of things as a kind of forthright smartarse made me a likable sort of young fellow on the way up. Nothing could have been further from the truth. I was a pain in the bum on just about every level imaginable in almost every instance – to teachers and fellow students alike - a compulsive shit-stirrer who gormlessly believed that was an okay thing to be.

Inevitably, there was some alarming news making a bee-line for me. News that I hadn't really anticipated at all.

With about three days of school to go, large envelopes were given out in class. My classmates tore theirs open to reveal a mass of coloured paper detailing what looked like booklists, subject requirements and the like. When my name was called, the first thing I noticed was my envelope’s lack of bulk and weight. It was thin and floppy.

There'd been a mistake, surely.
Posted by Lad Litter at 13:52

me as well.
My friends and I made a point of absence for all high school photo days - we must have sensed the looming threat of uploading.

Jeez, you're describing behaviour that I suspect I still exhibit...

Kath:
Thanks - next instalment coming soon, I promise.

AOD:
Hahaha! Adolescent photos are meant to immortalize your awkward phase but I'm one of those blokes who peaked in high school so they're alright.

Phil:
And I also. Just watered down a bit these days.