Here In My Car Again

This is what's going around on the 6-stack CD-player in the car at the moment.

Let It Bleed (1969) Rolling Stones
Let It Bleed is generally held to be one of THE quintessential late-60s albums. And this despite the fact that its 5th December 1969 release date meant that it was only available for the last 26 days of that decade. But never mind that. The album has a dark, brooding vibe to it that very much fitted the mood of the times. 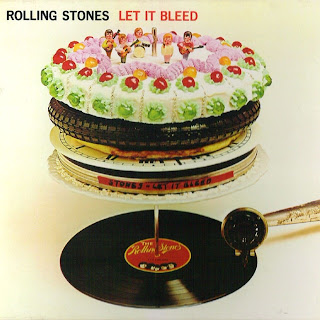 I first heard this album when I was 14, in the middle of 1974, and it quite simply floored me. The intriguingly spooky introduction to Gimme Shelter, the country-flavoured Country Honk - a Hank Williams-inspired version of their earlier hit Honky Tonk Women, some more dark atmospherics on Live With Me and Midnight Rambler and one unsung track, Monkey Man that should be as well known as the song that follows it to close the album, You Can't Always Get What You Want. It has bright production values at odds with the slightly muddy sound of most Stones' albums up to that point, driving rhythm section and a track listing that would cover all of the Rolling Stones' major influences and directions.

This album marked the period of transition when Keith Richard was playing almost all of the guitar parts - the dearly-departed Brian Jones features on just two tracks, on neither of which he plays guitar. Likewise, there are only two songs featuring the incoming Mick Taylor.

The album is coloured throughout by some very rootsy instrumentation like violin, mandolin, and slide guitars and heralded the Stones' intention to make increased use of outstanding session musicians like Leon Russell, Al Kooper, Ry Cooder, Merry Clayton and Bobby Keys.


Never A Dull Moment (1972) Rod Stewart
Hey, where are you going? Come back here. Now look, Rod Stewart made some really good music prior to his 1976 departure from the Faces. Before he seemed to become, well, a bit of a tosser. But in reality, most of us would have seized the same opportunities that Rod did if they were presented to us. Would we be yelling "No, get away Britt Ekland, leave me alone..."? I don't think so. The guy's allowed to make a good living. Besides, to those in the know, everything up to that execrable Atlantic Crossing (1976) jumping off point is good enough to still regard Rod Stewart very highly. 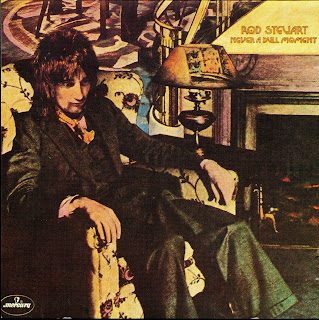 Rod's previous effort, Every Picture Tells A Story (1971) is a rolled-gold classic, and Never A Dull Moment would be the follow-up that stopped just a little short of that. It employs the same personnel as Every Picture, from his Faces bandmates keyboardist Ian McLagan, bassist Ronnie Lane and the ubiquitous Ron Wood on guitar as well as hand-picked mates like ex-Jeff Beck Group bandmate Mickey Waller on drums and classical guitarist Martin Quittenton.

The catalogue of Rod's great cover versions grows with the inclusion of Jimi Hendrix's Angel featuring knockout open-tuned guitar by Ron Wood, and Dylan's Mama You Been On My Mind. The songwriting synergy between Stewart and Martin Quittenton follows on from their earlier collaboration Maggie May to this album's hit single You Wear It Well.


Mystery To Me (1973) Fleetwood Mac
Lindsay Buckingham and Stevie Nicks were still two years in the future when this album, featuring singer-guitarist Bob Welch and guitarist Bob Weston, was released. The group had reached something of an impasse with internal harmony disintegrating and sales nowhere near record company expectations. 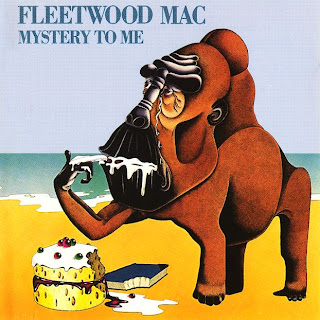 Apparently Bob Weston was having a fling with Mick Fleetwood's wife Jenny, younger sister of George Harrison's wife Patty Boyd, and that led to understandable tensions and Weston's departure soon after this album made it into the shops. It's got a lot of soft-rock on it, not an indictment if it's done well, and mainly funk-influenced songs from Bob Welch, but there are a few outstanding Christine McVie sad-girl-in-love piano ballads with that exquisite contralto voice of hers up front. Bob Weston is an amazingly versatile guitar player and the unsung rhythm section that gave the band its name, (ie Mick Fleetwood and John McVie) fattens the sound.

Stand out tracks are: The City, a Bob Welch composition on which Weston plays slide guitar through a wah-wah pedal and gets a sound too good to have been heard neither before nor since; a Bob Welch-led cover of the Yardirds' For Your Love; and any of Christine McVie's.


Teaser (1975) Tommy Bolin
I'm inclined to be a bit evangelical about this James Gang and Deep Purple guitarist who died of a heroin overdose in 1976. Being into him is like being a member of a secret society of guitar-players. Hardcore Deep Purple fans tend to snort when his name is mentioned. 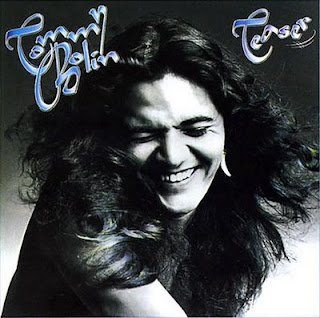 For Bolin's only Deep Purple album, Come Taste The Band, no homage was paid to Richie Blackmore. Make no mistake, that was a Tommy Bolin album that one, and damn good because of it. This contemporaneous solo effort, his first of two, mixes funk, hard rock, reggae, jazz and even a dash of glam in its song structures.

Bolin's voice is subdued and languid but it's his guitar-playing that permaeates the whole album so richly. He is an exceedingly distinctive player with a wide range of great signature licks, many of which are repeated, but why not? They sound great. He seems to use slide more as an effect but Wild Dogs showcases his capacity in this area.

Standout songs on the album include; the slightly campy title track; the glam album opener The Crunch; the jazz-flavoured Savannah Woman; and Wild Dogs, but the song-quality is even right across the album from an artist who was just starting to achieve his considerable potential.

Robin Trower Live (1976) Robin Trower
You could say, as many have, that Robin Trower is a Hendrix imitator. However, if you did, my response would be, "Yes. And did you also have a point?" If rock music's history isn't one of musicians borrowing from their major influences and extending them, then good evening, I'm Jimmy Page. This is one of the best live albums ever made, and captures the essence of Trower's power trio and its material. 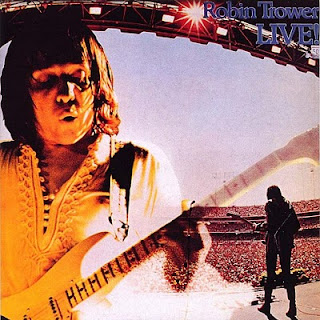 If anything, they have a sound and style similar to Cream and The Jimi Hendrix Experience. Trower is a brilliant player and gets that extraordinarily bluesy front pick-up sound from his ever-present Stratocaster. Too Rolling Stoned, Living in a Daydream and the best-ever version of Rock Me Baby will make you sit up and take notice and it's one of the few live albums from the 70s full of very lengthy tracks that just never wear out their welcome.


Front Page News (1977) Wishbone Ash
The first I heard of this group was awareness of their 1975 tour of Australia. A couple of years later, a mate dragged me over to the speakers at his 18th birthday party and insisted that I listen closely to their 1974 double-live album Live Dates. I had to acknowledge they were pretty good, with two, count 'em, two, hot guitar players. 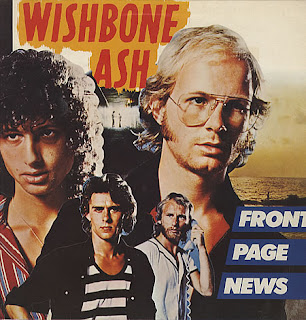 Their 1973 album Argus had gained a lot of attention and that would be their zenith in record sales. But that doesn't mean they weren't producing good music. This album has a great selection of tracks where the two guitars of Andy Powell and Laurie Wisefield intertwine beautifully. All of the band-members of this English group were superb musicians and bass-player Martin Turner's voice is a little reminiscent of Jack Bruce, only more restrained.

They can be heavy enough but also demonstrate English folk influences on a great many songs. Diamond Jack is my all-time favourite Ash song and there are ballads and flat-out rockers on this album that proceed without a wasted minute anywhere.

It's a great album from a band that I expected to view as a youthful infulgence when I took the record out of the rack for the first time in many years but in music at least, youth wasn't wasted on the young.

I was 21 when I heard it at xmas 1969, living in a big hippie Paddington share house where it was played relentlessly and LetItBleed floored me too, and still does.
as for Rod The Mod - he can sing, and This Old Heart Of Mine is one of my favorites of his covers (the videoclip is too cool too).
I LOVE Tusk by Fleetwood Mac, and thought of that video when I saw Grinderman in their ridiculous Russel Crowe outfits recently.

Doco on TV last night about music and its effect on the brain, but I could not watch as it featured that adulterous Gordon Police Sumner, so I bit off my nose to spite my face.
Hope your xmas was good. x x

Rod - from great to grate in one easy step. He should be sued for selling out.

I'll admit to not hearing or owning any of those albums but the COVERS....! They'd all make brilliant posters!

AOD:
Interesting that you mentioned Fleetwood Mac's song Tusk. I love that one too, and bought the 1979 double album on that basis alone. The rest of the album is crap!

And I just knew Let It Bleed would be evocative for you!

AGB:
Rod did redeem himself somewhat in the mid-80s when he re-teamed with Jeff Beck for the singles Infatuation (Rod's) and People Get Ready (Jeff's). Still, two great solo albums are better than none and good early stuff beats no good stuff at all.

Kath:
The cover art is sensational. I'm pretty sure I bought Fleetwood Mac's Mystery to Me based on the cover alone.

strewth this takes me back in more ways than I can remember.

particularly to never-ending discussions/arguments about who was the next ultimate guitar god, Trower figured in some of those conversations

I have a Trower instructional DVD for blues guitar on my Amazon wish list and will be getting it just as soon as the price comes down a bit.

lazy Lad Litter.
am having the blogging Ides Of March as well, but now playing at Flkr photos. sigh.
x x