Rock Revelations I: The Byrds

This is the first in a series of posts that will describe significant musical epiphanies I've experienced. It covers the 1965-67 period of The Byrds' original lineup. 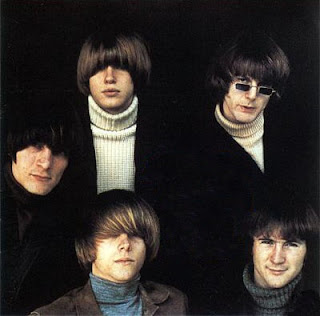 Now, I'd love to be able to say that I saw The Byrds live at the Whiskey a Go-Go in LA back in '65 or on their hugely successful British tour later that year. But no such luck. I was only six and my parents were pretty strict. No, the closest I ever got to an actual Byrd was the 1995 email reply I received from Roger McGuinn after politely enquiring when he'd be touring Australia again. I don't know when, but I shall return, was his delightfully MacArthur-esque answer.

And sure, I'd noted the 1978 Australian tour of McGuinn, Clark and Hillman alright, but not enough to go to any of their gigs. Regrets? I've had a few. You see, at that time, The Byrds were very much on the periphery of my musical interests.

It would be 2005 before I'd catch a terrific Sydney solo gig of McGuinn's on the excellent ABC-TV program Live at the Basement, but you can't say he didn't keep his word.

I'd originally come to The Byrds via some earnest teenage over-enthusiasm for Crosby, Stills, Nash and Young back in 1976. I wanted to explore the earlier work of the members of the first American supergroup, and I thought purchasing The Byrds Greatest Hits would do the job nicely. My 17 year old self liked it enough but thought all those Dylan covers were a little on the insubstantial side. 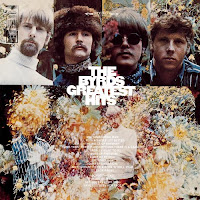 To be fair, I rated The Byrds much more highly than those other CSNY precursors Buffalo Springfield and of course, The Hollies, and I could see how they must have been very influential - how later groups like Poco, America and the Eagles clearly owed a debt to The Byrds' country-folk-rock stylings. But under my somewhat injudicious scrutiny, their mid-60s incarnation came out looking like a pre-Monkees attempt to cash in on the British mop-top phenomenon. 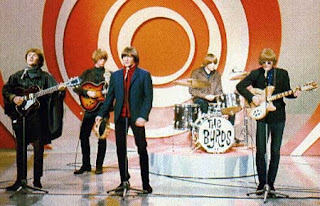 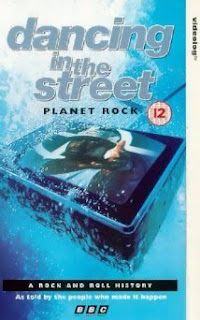 It was The Byrds' appearance on Dancing in the Street, BBC-TV's brilliant 1995 documentary series on the history of rock and roll, that made me want to explore their catalogue in more detail through fresh, better-informed eyes. You could call it a Damascene convyrsion. I had become a Nyrd, having learned enough from that series to develop a heightened appreciation of the pivotal nature of The Byrds' influence - how they weren't just a group that sounded a bit like later country rock bands - that they'd laid all of the groundwork for subsequent artists who would make a lot more money than The Byrds ever did.


The Byrds featured in two episodes of Dancing in the Street: Episode 3: So You Want to be a Rock and Roll Star, which covered folk rock; and Episode 6: Eight Miles High, on psychedelic rock. As you've  probably realized, both of those episodes carry the titles of emblematic Byrds' songs.


So You Want to be a Rock and Roll Star features the Byrds from the 20:20 mark (I would highly recommend watching the entire episode if you haven't seen it) and the narrative puts a compelling case for The Beatles, Dylan and The Byrds as a triumvirate of bridges between folk music, as it then was, and rock and roll.

McGuinn in particular talks about how he found considerable synergy between his folk roots and the kind of structures present in most Beatles songs. How George Harrison's use of the Rickenbacker 360/12, a 12-string electric guitar during the movie A Hard Day's Night inspired McGuinn to meld those key influences into a distinctive new sound that would be very much The Byrds' own. 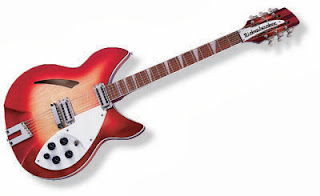 Dylan had already done all of the groundwork re-defining and revolutionizing folk music, so McGuinn took Bob's recent composition Mr Tambourine Man, changed its time signature from 2/4 to 4/4 and tacked on the now-iconic Bach-derived intro. Producer Terry Melcher's lack of confidence in The Byrds' musicianship meant that all instrumentation except for McGuinn's Rickenbacker were provided by the Wrecking Crew. But there was no doubt rock music had reached a significant watershed.

With a Number One hit on their hands, The Byrds' jangling proved to be profoundly influential, all at once accelerating and validating Dylan's move to electric instrumentation and providing the most distinctive motif running through this new genre of folk-rock during 1965-66. Simon and Garfunkel's The Sound of Silence would have electric 12-string guitars added in post-production and I Can't Explain, The Who's first single, would also be driven by the Rickenbacker 360/12.

They come on pretty early at 2:13 during Episode 6: Eight Miles High. And why not? Their haunting January 1966 single pretty much started the whole psychedelic phenomenon. Again, I urge watching the whole thing if you've got time - it's well worth it.
After the immense success of Mr Tambourine Man and immediate follow-up hits such as Turn, Turn, Turn, McGuinn found himself looking for a way to further explore the potential of his ever-present electric 12-string guitar. He found it in an unlikely place.

McGuinn had become fascinated with the music of jazz-saxophonist John Coltrane, and felt that the Rickenbacker 360/12 might provide a means of paying homage to Coltrane's stylings. A Byrds composition, Eight Miles High would feature double-entendre lyrics (aeroplane flight or drug-induced trip? You decide.), an eerie melody from Gene Clark, some exciting rhythmic contributions from David Crosby and superb vocals.

Despite being unofficially blacklisted from radio airplay due to moralistic pressure group influence, Eight Miles High would prove just as influential as Mr Tambourine Man, almost eighteen months before the Summer of Love.

After watching this series, I couldn't get enough of the song Eight Miles High and listened to it incessantly. I played The Byrds Greatest Hits again and again to make sure I hadn't missed anything. And I thought it was worth betting that non-compilation studio albums by the Byrds could well contain some great unheralded material. To the record shops! 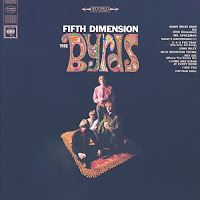 First priority was getting a hold of the album that featured Eight Miles High, 5th Dimension. And my timing was impeccable, because Columbia had just released the re-mastered Legacy reissue versions of the Byrds' back catalogue with bonus tracks. On 5th Dimension, their third album and the first without the recently-departed Gene Clark, bonus tracks included an earlier version of Eight Miles High recorded at RCA. Crosby preferred this slower, moodier alternate take but I'm inclined to favour the final Columbia version.

Other standout tracks are the folky Wild Mountain Thyme, the underrated Hey Mr Spaceman, Crosby's I See You and two other bonus tracks: I Know My Rider and Why. Overall, 5th Dimension hangs together pretty well as an album without being spectacular.

Next on the shopping list was The Byrds' second album, 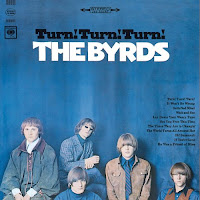 Turn, Turn, Turn, the title track of which was their biggest hit. The only other really good song on the original track listing is It Won't Be Wrong, but there are two dynamite bonus tracks in She Don't Care About Time, one of Gene Clark's finest compositions and featuring a great drum pattern reminiscent of Ticket to Ride from Michael Clarke, plus a lovely cover version of Dylan's It's All Over Now, Baby Blue. 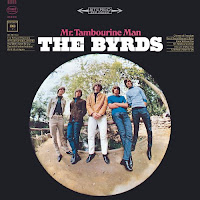 The Byrds' first album, which took its title from their hit single Mr Tambourine Man, made the cash register ring next. This album is studded with entries from The Byrds' Greatest Hits including the Gene Clark penned I'll Feel a Whole Lot Better, The Bells of Rhymney, All I Really Want To Do and Chimes of Freedom.

Another Gene Clark composition, the poignant Here Without You, is a great unsung Byrds album track that deserves a higher place in the Byrds' canon, even if only because it is an obvious melodic precursor to Eight Miles High. 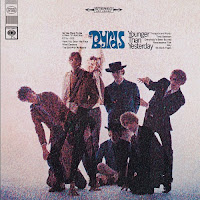 The Byrds' fourth album, Younger Than Yesterday, seems to follow logically from 5th Dimension and it is here that David Crosby's dreamy compositions Everybody's Been Burned, Mind Gardens and the bonus track It Happens Each Day arguably represent an early peak for his songwriting. I've always loved So You Wanna Be A Rock and Roll Star with its counter-intuitive trumpet from Hugh Masekela and My Back Pages is another significant Dylan cover.

There's also a more eastern-influenced version of Why and a catchy first-up songwriting credit for bass player Chris Hillman in Have You Seen Her Face. 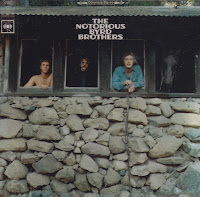 I know a lot of Nyrds regard this album highly but I couldn't find too many redeeming features on The Notorious Byrd Brothers apart from I Wasn't Born To Follow, a song that would later appear on the Easy Rider soundtrack. You could have knocked me over with a feather when I found out it was a Goffin-King composition.

Internal tensions ran rife through the sessions and David Crosby would either leave or be fired (depending on whose version of events you believe) during the recording of The Notorious Byrd Brothers.


It's a shame that The Byrds didn't produce an album of the quality that would have done justice to their talent and influence from their first five attempts. Maybe if some of the outstanding bonus tracks had replaced the lesser album tracks. That said, you probably need to be mindful of the fact that rock music wasn't album-oriented during The Byrds' peak period during 1965-67 - it would take the Beatles' Rubber Soul (1966) to start to alter the industry's emphasis on albums over singles, and that wouldn't be fully realized until 1968, the first year that albums outsold singles.

That said, I would highly recommend the Legacy reissues of The Byrds' albums for their enhanced production values and bonus tracks of unusually high quality.

You may have gleaned from all the prose north of here that although I'm a fan of The Byrds, it's not unconditional. My view of the Byrds could best be summed up by one of the bonus tracks on Sweetheart of the Rodeo: the bluesy Reputation. I think it's a terrific song, a folk-country-blues-rock 12-bar that seems to have everything. But the bass drops out during  the second verse, causing the song to lose a fair bit of momentum. It kicks back in fairly promptly, but the damage has been done and that's probably why it didn't make it onto the original album.

And that's pretty much an encapsulation of their career for me: I love and admire them for the peaks in their output and all they inspired, but that intangible nagging feeling of how much better they might have been is inescapable.
Posted by Lad Litter at 01:34

'McGuinn and McGuire couldn't get no higher
in LA and you know where it's at.
and no-one's gettin fat cept Mama Cass.'

"how much better it could have been" ? ... if they weren't all ripped off their faces the whole time.

have you heard The Lovin Spoonful*

AOD:
I do enjoy the perspective you so often bring with your comments. And yes, all of the major luminaries seemed to be so interconnected in that burgeoning proto-folk-rock scene back then didn’t they?

I don’t mind the Lovin’ Spoonful but I’d like them a lot better if John Sebastian had been less of a right-wing reactionary.

That’s a great question re the Crosby-Etheridge experiment:

In January 2000, Melissa Etheridge announced that Crosby was the biological father of two children Julie Cypher gave birth to by means of artificial insemination. At the time, Etheridge and Cypher were in a relationship.[12][13