Classic Albums Augmented VIII: Everybody Knows This Is Nowhere

Neil Young with Crazy Horse: Everybody Knows This Is Nowhere - Sugar Mountain 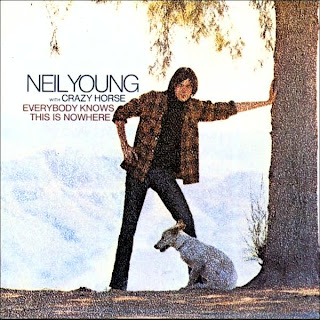 Everybody knows this isn't Harvest. But remarkably, Neil Young's 1969 solo outing, his second after leaving Buffalo Springfield, is a better album than the ubiquitous 1972 LP that everyone's familiar with. That's probably a big statement. Iconoclastic even. But I also rate Young's On The Beach (1973) more highly than Harvest, so it figures.

Anyway, this post is not designed to do a Mythbusters on Harvest. You can read what I had to say about it here. And a great article comparing Harvest and its lesser-known follow-up On the Beach here.

I'm listening to Everybody Knows This Is Nowhere on CD these days, converted from my original vinyl by way of a judiciously purchased digital turntable. As with all of the other LP conversions I've done, the sound of the needle landing on the LP at the beginning of each side has been left in the finished collection, just for old times' sake.

I wasn't expecting to like this album as much as I do after not hearing it for over twenty years. My recollection was of a couple of plodding near-dirges and extended jams taking the last two tracks on each side, at eleven and nine minutes respectively. But Everybody Knows This Is Nowhere is a fine album, and I'm glad I didn't dawdle in getting it onto CD.

The album seems to celebrate its lack of polish in exploring the interweaving folk and country roots that Neil Young drew on and still does. His mournful, almost drunken vocals must have sounded jarring to many listeners back in 1969, but they'd feel no such misgivings in the ensuing decades. The vocal track is actually a guide vocal recorded directly through the mixing desk, and is consequently unadorned with the usual enhancements like reverb. Young had a hunch that was what would suit the sound he was after and I'm inclined to agree with him.

Backing band Crazy Horse's reputation for looseness doesn't really amount to much here. Danny Whitten's guitar complements Young's very nicely and there's a clear combination of both versatility and virtuosity across what is an authentically rootsy album.

Everybody Knows This Is Nowhere opens with my all-time favourite Neil Young song: Cinnamon Girl. There's a great opening riff and some very heavy guitar playing throughout. Most people I've played it to are surprised that Neil Young could produce such a knockout rock song, but that probably highlights why there's a need for exploration beyond the better-known albums in the Neil Young catalogue.

The Byrds-like arpeggio that plays over the verses and then segues seamlessly back into the riff is so insistent that you hardly notice the guitar solo staying on the same note all the way through. Cinnamon Girl is a welcome staple of Young's live act and I've seen it faithfully covered by Joe Walsh at the Prospect Hill Hotel in 1985 and also by the underrated Diesel at the MCG a few short years ago.
The title track is a countrified song with a fun feel and chorus that builds to a catchy melodic hook, while the droning Round and Round swirls slowly. Down By The River is an ominous murder ballad that becomes an extended eleven-minute jam. I really wasn't expecting much from this opus after not hearing it for years but the dynamic variation ensures it never becomes a drag.

The Losing End has a jauntily depressing country flavour to it, while Running Dry sees a mournful Young at his most quietly despairing, set against a backdrop of Appalachian-sounding violin. Cowgirl in the Sand is another of Young's pieces that segues into an extended jam and as such, functions as an effective companion piece to Down By The River. Some of you may be familiar with thelive version, delivered acoustically on Crosby, Stills, Nash and Young's double-live set 4 Way Street (1970).

Let's face it, this album is not going to be improved to any great extent by the addition of Sugar Mountain. So my suggestion here is a case of giving the album some closure - it has only seven tracks after all, and it's not an incongruous inclusion. You might be surprised to learn that Sugar Mountain, a live recording from 1968, had been the B-Side of two of Young's early singles and never appeared on an album until the 1978 three-record retrospective set Decade.

It's a wistful, child-like ballad that became a minor hit in the wake of Decade's 1978 release. Young had written the song in 1964 and it documents his fond memories of growing up in Winnipeg.

So Which Tracks Would Miss Out? None - Sugar Mountain can be added without the album exceeding 45 minutes.
Posted by Lad Litter at 19:00

Snap!
I have a turntable in the kitchen and this is on it now, the Ed Thrasher designed fold-out cover now next to the keyboard.
I am sad to hear that you have friends surprised that Neil can rock.
Keep rockin' in the free world.

AOD:
I'm glad to hear you still give vinyl a spin - and this album is certainly worth it. I rate my favourite Neil Young albums in the following order: 1) Everuybody Knows This is Nowhere; 2) On the Beach; 3) Harvest; 4) After the Goldrush

my neighbours are probably weary of my vocal participation though.
I wish I had seen his Transformer phase at Festival Hall.

Those 11-minute tracks that everybody did in 1970 were for blissed-out Heads at home nodding away in their trances.

MS:
Yes, I was as surprised as anyone to find both Down By The River and Cowgirl in the Sand had improved with time.

Kashmir gets a fair run at my place with our emerging teenage guitarist very Led Zep oriented. I can never find the albums when I want them because he has them in his room!