Hitting the shops in December 1968, Beggars' Banquet was the album that signaled a return by the Rolling Stones to their bluesy roots after the psychedelic experimentation of Their Satanic Majesties Request, released 12 months earlier.


This is the original cover of the album, but it only became available upon its 1986 CD release because sufficient time had passed for a toilet wall covered in graffiti to become non-controversial. However in 1968, the stand-off with a nervous Decca record company, delayed the album's release until the Stones backed down over this affront to contemporary sensibilities.

Meanwhile, the cover eventually chosen by the Stones to replace the original was also controversial, but for different reasons. 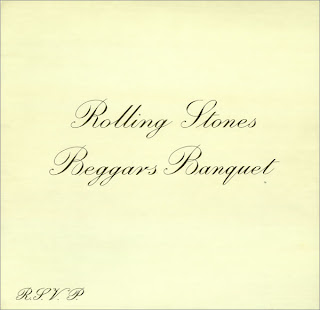 You see, the all-white cover meant that they had once more chosen something very similar to what The Beatles had already done. And so just as the cover of Their Satanic Majesties Request drew unfavourable comparisons with that of The Beatles' Sgt Pepper's Lonely Hearts Club Band, the revised artwork on Beggars' Banquet looked very, very similar to the Nov 1968 double-LP The Beatles, aka The White Album. It seemed as though the Stones' just couldn't help themselves.

﻿This is the cover they should have opted for: 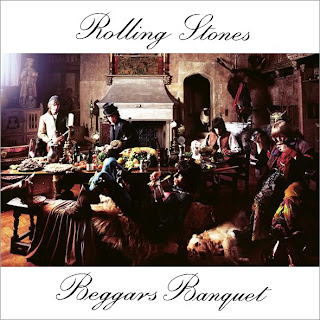 The image actually looks like a beggars' banquet for starters, so it makes more sense than the toilet wall. And this particular shot is a much better take from the photo shoot than the re-touched image that spreads across the inside of the album's gate-fold cover.

But I digress. This album was the latest entry in the emergence of rock music, taken for granted these days but in 1968, a term that appeared to encapsulate the music that defined this watershed year. It wasn't rock and roll, nor was it rhythm and blues. It wasn't beat music, nor was it psychedelic. And even though this apparently new classification drew on all of those influences, and at times added folk, jazz and country influences to the mix for good measure as well, it was a case of the whole being greater than the sum of its parts. This new release was to be something of a test for the Stones. After their previous album was largely dismissed as self-indulgent psychedelic meanderings, the Rolling Stones needed to recapture a fan-base that would quickly move onto newer, cooler sounds if their attention wasn't gained and held. And the track listing delivers.

Beggars' Banquet opens with the samba-like rhythms of Rocky Dijon's congas on Sympathy for the Devil. Jagger based the lyrics of this powerful first-person narrative on the novel The Master and the Margarita. A fascinating insight into the recording sessions is provided by Jean Luc Godard's film One Plus One, which shows the evolution of the song through many different stages. I have to confess to liking Brian Jones' acoustic guitar part as depicted in the documentary and lament its being left out of the finished track, but Richard's soloing is stinging and heavy and as good as he's ever done. And the whoo-whoo vocal punctuations are a distinctive feature.
The mournful country feel of No Expectations contains slide guitar by Brian Jones that would end up being his last major guitar contribution, while Nicky Hopkins' evocative piano playing explains why he was the Stones' first choice piano player for the next six studio albums. These burgeoning country influences are taken further on the riotously satirical Dear Doctor, but without sounding phoney, while Parachute Woman delivers a smouldering, bluesy ambience that fits with the blues-rock flavour of the times. Concluding Side One, Jigsaw Puzzle is a mature, Dylanesque reflection on rock stardom and its pressures. It's a shame Keith's slide guitar playing on this track is well, crap, but who would have had the nerve to tell him?

Opening Side Two is Street Fighting Man, one of my very favourite Stones songs. It explores similar themes to the Beatles' Revolution, but with understated sitar, droning feedback, crashing open-tuned acoustic guitars and thundering drums. To me, it's always sounded like something of a companion-piece to Jumpin' Jack Flash and I just love its overall atmosphere.

Prodigal Son, written by Rev Robert F Wilkins, is an unashamed and unadorned homage to traditional Memphis-style blues, with Richard's open tunings and Jagger's baritone delivering the goods. You could consider the overtly sexual Stray Cat Blues as the precursor to a style Led Zeppelin would later make their own, and much more menacing in tone than the slower live version that appears on Get Yer Ya-Yas Out. Factory Girl was once described by Keith Richard as an Appalachian Molly Malone and I'm inclined to think he had a point about it's potpourri of folk influences. 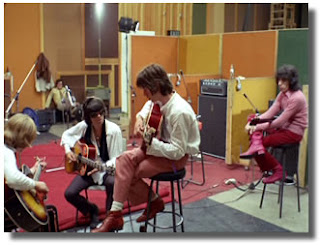 Closing out Beggars' Banquet is Salt of the Earth, a love song to the huddled masses that would be laughably incongruous for the usually snide, arrogant Stones were it not so anthemic. And genuine. They're not taking the piss. But then again, it's working class Keith on lead vocals for the first two lines of the song, after all.

So the album as a whole hangs together very nicely. It would begin a five-album sequence of classics that would take the Stones through increasingly impressive follow-ups in Let It Bleed; Get Yer Ya-Yas Out; Sticky Fingers; and Exile on Main Street. 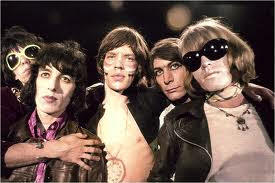 This is undoubtedly an album that is fine just as it is, but would be super-charged by the addition of the song that is inextricably intertwined with its era like no other - Jumpin' Jack Flash. This is a spine-tingler of a song and was the first time Keith Richard had based a whole song around open guitar tunings (E and G, thanks for asking) Tunings he'd learned from the Everly Brothers on an early British tour back in 1964. That was a huge factor in giving the song its ethereal droning quality.

There is some doubt as to whether it's Richard or regular bass player Bill Wyman who plays the portentous incoming bass line but whoever, it's good. And anyway, the swirling Hammond organ outro is definitely Wyman so he was a major contributor come what may.

Jagger struck just the right balance between a drawl and a snarl on the vocal line and the It's alright now chorus has been an iconic rock touchstone for many, both vocally and lyrically. 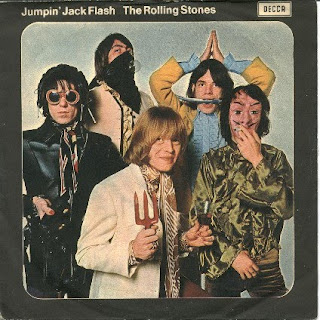 The title comes from Richard's nickname for the groundsman at his Redlands estate but it was Jagger who ran with the school-of-hard-knocks first person narrative. Much as I appreciate Beggars' Banquet's final track listing, I can't help but feel how much more highly the album would have been regarded with the addition of Jumpin' Jack Flash.

Check out this clip of the Stones playing it live in the studio not long after recording - they get close to matching the single release version in a way that they never would again.

So Which Tracks Would Miss Out? None - the addition of Jumpin' Jack Flash still sees the album come in at under 45 minutes.