Here In My Car - Ad Nauseam

Another six albums on the car's 6-stacker CD player, all from around the same time period.

BBC Sessions: Cream (2003) - (recorded 1966-68)
God bless the BBC for inviting so many seminal English rock bands into the studio during the 1960s to be recorded and\or broadcast live over the airwaves. The first CD-release in this series was The Beatles Live at the BBC. It wasn't all musical altruism though: the BBC would hold the rights to those performances and could re-broadcast them at will, thus avoiding considerable royalty payments. Shame about them not being careful enough to hang onto the original master tapes though. 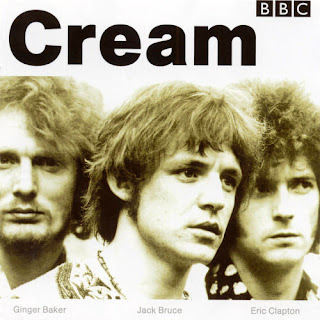 This recording brings together, as most in the BBC Sessions series do, numerous  appearances on various BBC programmes. The album opens with the Saturday Club host gee-ing up all of the cool cats out there about The Cream in a retro-cute accent that tries for mid-Atlantic but barely makes it out of the Western Approaches. Still, although Eric Clapton is the only band-member interviewed, he makes a lot of sense, as we've come to expect from ol' Slowhand.

It's a fairly comprehensive record of the totality of what Cream were about, containing 26 predominantly live tracks in all, including the majority of their classic songs and some contra-intuitive choices such as: Wrapping Paper; I'm So Glad; Rollin' and Tumblin'; and We're Going Wrong;  The sound quality is variable - but only from fair to atrocious - and is  reminiscent of the calibre of what used to come out of my scratchy transistor radio on hot days at Ocean Grove surf beach.

And so, even though it's a comprehensive collection of Cream's catalogue, and brings back how exciting they were across the blues, rock, and psychedelic genres (and in fusions of the above), if you're interested in a live Cream set of higher quality, in both production values and performances, Live Cream Volume II is a much better bet than this album.


Sweetheart of the Rodeo: The Byrds (1968)
Recorded in Nashville, Sweetheart of the Rodeo represented a major departure for The Byrds, but one that reflected the synergy in the roots of Roger McGuinn; Chris Hillman; and new band-member Gram Parsons. And although it was a move that kept them very much in touch with the many bands and artists for whom this album would prove profoundly influential, it shrunk and shifted the Byrds' hitherto mainstream folk-rock-psychedelic fan base. 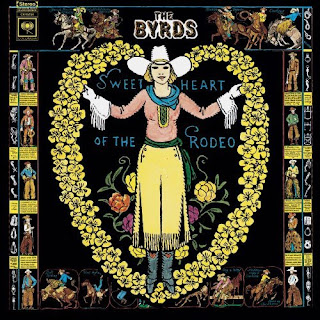 The Byrds' sixth studio album was originally intended to be a magnum opus double-LP in which the Byrds would address the history of American music. But as with the Who's ambitious Lifehouse project, which fizzled out into the superb Who's Next, the Byrds may have dodged a bullet by confining themselves to a single-LP country album.

Guitarist-songwriter Gram Parsons had auditioned to join as a piano player to replace David Crosby after Crosby had been dismissed midway through the band's previous Notorious Byrd Brothers album. Parsons would end up augmenting and intensifying the existing country influences of McGuinn and Hillman.

The album opens with a beautiful Dylan cover from his Basement Tapes, You Aint Goin' Nowhere, all rich harmonies and plaintive pedal steel. I Am A Pilgrim and The Christian Life evoke Parsons' gospel roots while Pretty Boy Floyd explores American 20th Century folk traditions. The poignant Hickory Wind became Parsons' signature tune and it's not hard to see why.

The bonus tracks on the 1993 reissue are very worthwhile additions. You see, the management of Parsons previous outfit, the International Submarine Band, still held the rights to a number of his compositions and Parsons was legally forbidden to sing the lead vocals on those songs. The Byrds pushed ahead on re-takes with Roger McGuinn filling in for Parsons, and doing quite creditably. The bonus tracks include the original takes with the Parsons vocals restored - so this is one of those times when the bonus tracks really are, well, a bonus!

After this album's mixed reception, Parsons took to hanging with Keith Richard and abruptly left the Byrds on the eve of a South African tour, reportedly after Richard informed him that the Stones didn't tour under apartheid regimes. 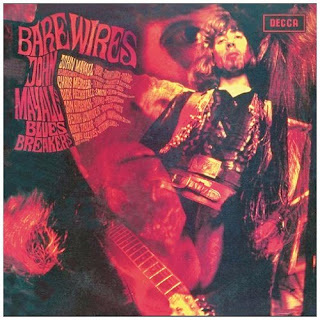 If you're anything like me, you'll have bought John Mayall albums to gather the early work of seminal blues guitar players like Eric Clapton; Peter Green; and Mick Taylor, who fills the role on this album. But then you might have found multi-instrumentalist Mayall's rich and varied homages to a range of blues styles, some of them uniquely his own, to your liking just for their own sake. The Yardbirds have a similar persona.

This is not the Bluesbreakers' most solid album: Bluesbreakers with Clapton; A Hard Road with Green; and Crusade, also with Mick Taylor, are all superior. But I would put Bare Wires in about the same category as its 1969 follow-up, Blues From Laurel Canyon, Taylor's last with Mayall before joining the Rolling Stones - that is, it's a bit more meandering and self-indulgent than Mayall's previous efforts but if you give it more than just the one listen, you're not going to be putting it up on eBay anytime soon.

I'll be honest with you, Jefferson Airplane's fourth studio LP is no masterpiece. To be sure, none of their albums qualify in that regard, but Crown of Creation is their most consistent effort overall, and has a number of standout tracks. 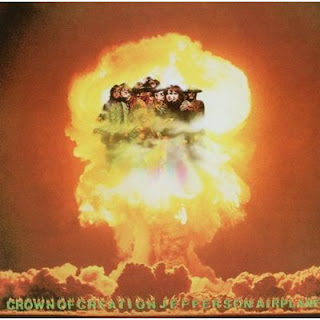 As with most groups that sit somewhere in the art-rock pantheon, the Airplane did a lot of experimenting. Some of it worked beautifully, and some of it fell pretty flat. The album's opening track, Grace Slick's Lather, falls into this nice-try category - and that kazoo solo: puh-lease! But there are delightful curios: like the David Crosby composition Triad, rejected by his fellow Byrds in 1967 and not recorded by him until Crosby, Stills, Nash and Young's 1970 double live set 4-Way Street; and guitarist Jorma Kaukonen's drawling Star Track.

Greasy Heart is full of archetypal Slick delivery, all harsh vituperation, set against Kaukonen's fuzz-drenched guitar, while guitarist Paul Kantner's title track and House at Pooneil Corner demonstrate how the art-rock thing can work so well when it combines with West Coast influences.

For me, Jefferson Airplane's strengths and weaknesses, encapsulated in Crown of Creation, are all of a kind. And I've got big soft spot for the group, both because of their strengths, and in spite of their weaknesses.

Traffic: Traffic (1968)﻿
You might know this outfit from its signature hit single of 1967, Hole In My Shoe. You know, that trippy-hippy song covered by Nigel Planer from the Young Ones in 1984. Traffic were a fine example of the British psychedelic-rock genre, with really catchy songs and pure talent that just seemed to come pouring out of the speakers when I first heard them. And why not? Any band that boasted Steve Winwood and Dave Mason as principal songwriters (who didn't collaborate, incidentally) should do just that.

Admittedly, it's unusual for an eponymous album to not be a debut, but Traffic managed it with this Jimmy Miller-produced second album of theirs. There's a big drum sound from Jim Capaldi that really propels all of their songs right along and production values are higher than the psychedelic-rock genre is usually known for. 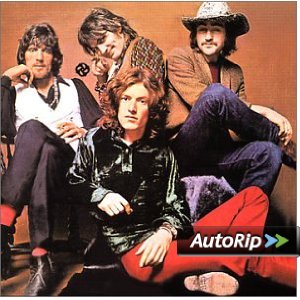 The album alternates Mason and Winwood compositions in its track-listing and although it's easy to differentiate, the group feel is strong and harmonious throughout an LP with no shortage of good songs like: the multi-layered You Can All Join In; Winwood's bouncy Pearly Queen; Feelin' Alright, one of Mason's signature tunes; and Crying to be Heard, with its yearning harmonies.

If anything, Traffic provided a more polished, musically competent take on psychedelia than their American counterparts and are well worth any time (or money!) spent exploring their output.

The Kinks Are The Village Green Preservation Society: The Kinks (1968)
I had this album on my Amazon wish list and forked out my hard-earned for the whole CD on the basis of one song only: Picture Book. It was a warm, boppy, plaintive feelgood song that got a little airplay on Melbourne top-40 radio station 3XY but seemingly nowhere else, during the summer of 1968-69, . 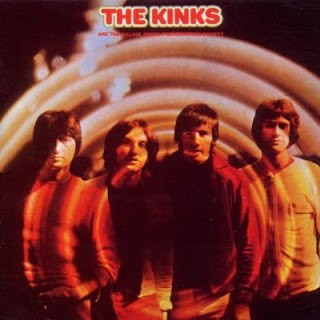 The Kinks driving force, Ray Davies, envisioned this collection as a concept album paying nostalgic homage to English village life. Never mind that Davies had never lived this particular dream growing up in inner London's working class Muswell Hill. He set his vision across a range of exciting musical styles in direct opposition to the apocalyptic post-psychedelic feel of so much rock music during this brief period. So it makes perfect sense, from Davies' point of view, that Village Green celebrates a laid-back Englishness that stands in stark contrast to contemporaneous releases like the Beatles' White album, Beggars Banquet by the Rolling Stones, or Led Zeppelin's first LP.

There's the rural blues of Last of the Steam Powered Trains, the authentic reggae feel of the whimsical Monica, and further similarly evocative character-driven songs like Walter and All of My Friends Were There. But it's all summed up rather nicely in the delightful title track, which opens the album. Indeed, Village Green is soaked with Davies' fondness and yearning for the lifestyle and rich cast of characters the album captures.

This is a terrific album, one of my all-time favourites, and all the more so because it reveals a previously hidden side of the Kinks. One that led me to a fuller appreciation of the genius of Ray Davies, and made me determined to explore the Kinks' back-catalogue in more detail.

Well, you've given me a few more things to check out on Spotify...

All of My Friends Were There.

My buddies shun me, since I turned to Jesus. They say I'm missing, A whole world of fun.

But not in the case of all this great music. I can live without Grace Slick, but Traffic were hilariously stoned off their heads for their one and only photo session, and a hole in a shoe is something that can keep a Head fascinated for hours.
*goes off singing*
on the 34th floor a gold-plated door, won't keep out the lords burning flame ...

(have you checked Kaths connection with The Mothers Of Invention?)

Kath:
I think it’s such great music all by itself but you need to be aware that the music of the period 1966 – 1976 is something of a sacred “Golden Age” for baby-boomers like me. I used to be painfully evangelical about all of this stuff when I was younger, but I’m a bit more “Please consider...” these days. However if you’ve kind of heard of some of it, checking out the music will at least sate your curiosity.

Tony:
Good point Tone – I’ve amended the review to include your excellent tip.

Ann O’Dyne:
I knew I could count on you to be an aficionado. The Airplane are an indulgence of mine that I wouldn’t recommend to anyone else. I view Yes and CSN&Y similarly. Traffic similarly, except I actually think they were really good, not just appealing to me. Will check out Kath’s Mothers connection tout suite.