Electric Ladyland - Jimi Hendrix Experience (1968)
I was given this album, the British import version with the controversial nudes cover, for my 18th birthday in Nov 1977. I have to admit, I rate it slightly lower on the quality scale than the Experience's debut LP, Are You Experienced? (1967), but it's still pretty fabulous. 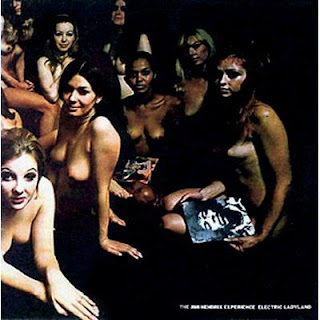 The story of the album's making is one of late-night party sessions in New York's Record Plant studios. Hendrix would drag friends and hangers-on into the studio after carousing at his favourite New York clubs. This annoyed bass player Noel Redding so much he stopped bothering to turn up! The album features guest artists such as Steve Winwood; Jack Casady; and Dave Mason. And if Brian Jones had been less comatose, it would have been his piano on All Along the Watchtower.

Overall, the album is pretty even in its quality, with two killer standout tracks that close out this double-LP: All Along The Watchtower; and Voodoo Chile (Slight Return). Jimi's playing is sensational, as you might expect, and he makes use of some innovative production techniques that enhance his guitar work - like phasing back and forth between stereo-left and stereo-right.

Like I said, Are You Experienced? is more deserving of the classic label, but this was all Jimi's and you've got to love it for that too.

Harvest - Neil Young (1972)
It was one of my sisters' boyfriends who left this at our place in 1973. He never came back for it. I'd heard of Neil Young but knew nothing about him. And even being a Dylan fan didn't prepare me for Young's idiosyncratic vocal style. I thought he was kidding. 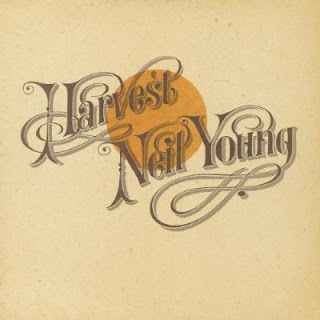 But Harvest has a haunting quality to it and beautiful production values. The crew for Young's third solo album features identities such as Linda Ronstadt; James Taylor; and Crosby, Stills and Nash. Harvest's opening track, Out On The Weekend, combines Young's folk and country influences.

There are a couple of overblown dirges that fans of this LP never mention (There's A World; A Man Needs A Maid) but everything else hangs together beautifully: the shuffling title track with it's plaintive pedal steel; the timeless trilogy of Heart of Gold, Old Man, and The Needle and the Damage Done; and two standout rockers in Alabama and Words.

The album's ubiquity has probably worked against it somewhat - you need to take it out of the record rack and play it right through, and all the reasons why you liked it so much in the first place will come flooding back to you.


Who's Next - The Who (1972)
This was one of the five albums my older sister bought for $5.95 all up when she joined the Australian Record Club in 1972. I was thirteen and loved it right from its first spin on our new second hand record player. 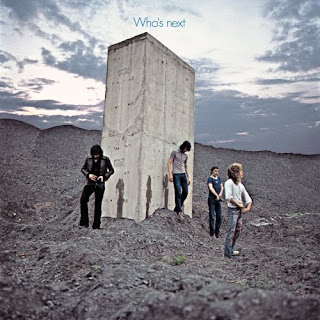 The Who needed a follow-up to their ground-breaking double-album rock opera Tommy and Pete Townsend, at his creative peak, had another massive work in mind. The Lifehouse project was designed to be another rock opera but when no-one else could understand what Pete was on about, it "fizzled out" into nine terrific songs and one of the all-time great albums.

If you ever doubted Keith Moon's place in the pantheon of great rock drummers, this is the album to turn you around. You can listen to him right across the whole LP and damned if he isn't doing something breathtaking at all times. And that probably goes for the rest of the group too.

The album opener, Baba O'Riley (and I don't mind if you only know this as oh yeah, that-CSI-Miami-teenage-wasteland-music) is a killer, with atmospheric synthesizers and an electric violin giving it an almost eastern European undertaste to its hard rock. All of the tracks are great - if there's a weak one, it's probably the six-minute Song Is Over that closes side one but Pete could probably explain why it belongs there even if I can't. The iconic Won't Get Fooled Again is just one of the brilliant songs on this album that also includes Behind Blue Eyes; Bargain and the John Entwistle-composed My Wife. Fabulous, all of them.

As an exercise, don't play this album for a number of years and then see what happens when you listen to it again: it'll be like a reunion with a long-lost best friend with whom you don't know how or why you ever lost contact.


Bang - James Gang (1973)
My first encounter with the James Gang happened back in 1976 when my stoner next-door neighbours moved out and left me all their records. This was one of the few playable ones, and the only reason I put it on for a listen was that it featured guitarist Tommy Bolin, who had just moved from the James Gang to Deep Purple to replace Richie Blackmore. 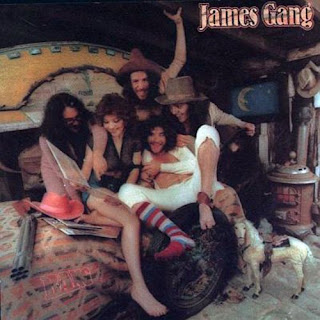 Bolin's playing is highly distinctive and he's capable not only of ripping it up like any 70s guitar hero, but also of great subtlety and charm. He begins the album using an echo-phaser for the intro to the opening song, Standing In the Rain, a great song.

There are purist James Gang fans who won't listen to anything post-Joe Walsh but this album is very consistent and the rhythm section of Jim Fox and Dale Peters, permanent band members through a passing parade of lineup changes, deserve plaudits for their outstanding work.

Vocalist Roy Kenner has a very distinctive style, highlighted on his multi-tracked a capella signature tune Rather Be Alone With You, while Bolin handles the lead vocals on Alexis, a ballad that builds while showcasing his repertoire of licks and tricks.

The James Gang were a really good band and, like the Yardbirds and Bluesbreakers, more than just an early staging post for prominent guitar players. It's a shame this lineup didn't put out more albums than this one and its 1974 follow up, Miami.

Countdown To Ecstasy - Steely Dan (1973)
What a tape of this album was doing on the car stereo of one of my dedicated heavy-metal fan best friends back in 1978, I'll probably never know. But it's a safe bet that the musicianship and songwriting on this album would sway even those least likely to appreciate Steely Dan's particular style of jazz-influenced soft-rock. And please, not that there's anything wrong with that... 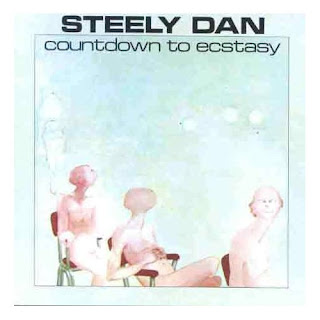 The album opens with the near-manic Bodhishatva, and if this is your first taste of Steely Dan, the timing shifts and interweaving piano and guitar runs are bound to make a solid first impression. Even 40 years after its release, this album's high production values give it an immediacy that even Steely Dan's harshest critics (too LA-session-muso-slick, no rawness they would say) couldn't deny. The boppy autobiographical My Old School, a minor hit on US FM radio, evokes a universal nostalgia for lost youth that is thankfully unsentimental.

Despite the album's overall quality, none of the other tracks quite measure up to the elite standard of these two tracks, so it might be tempting for the listener to consign Countdown to Ecstasy to the too- readily-disdained "easy listening" category.

I think that would be selling it short though - there's just too much  going on with this LP.


Stormbringer - Deep Purple (1974)
I was one of those purists who wanted nothing to do with any Deep Purple lineup other than the classic Mark II (Ian Gillan; Richie Blackmore; Roger Glover; Jon Lord; and Ian Paice). It was a short-sighted stance, because the lineup featured on Stormbringer (with David Coverdale and Glenn Hughes replacing Ian Gillan and Roger Glover on vocals and bass respectively), produced two significant albums: 1973's Burn; and this superb outing, set to be Blackmore's last before founding Rainbow. 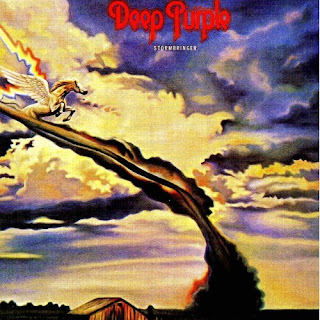 As with Burn, Coverdale shares vocals with bassist Glenn Hughes and their voices are highly complementary. Although the cock-rock flavour of songs like Lady Double Dealer and Hi-Ball Shooter  may make it all seem a bit dated, that minor sticking point aside, the album hangs together as more than just a collection of really good songs. The album's highlights are its more ballady numbers like the exquisite Gypsy, Coverdale's melancholy Soldier of Fortune and the Hughes-led Dear Prudence homage, Holy Man, but unlike a great many acknowledged classic albums, there are no weak songs on this LP.


Blackmore, Lord and Paice are as good as ever on Stormbringer, and even though Richie is a little more subdued than on previous Purple albums, the overall sound doesn't suffer.

I must confess to not expecting much from Deep Purple's least heralded album - but it's the one I now consider their most thoughtful and creative.

Was never much of a Hendrix fan, but his version of Like a Rolling Stone at Monterey is G.O.L.D.

Tonight's The Night craps all over Harvest. "I'm not going back to Woodstock for a while..."

For some reason, I always thought The James Gang merged with Spirit would have made for a magnificent sound.

Pete was mad not to include Pure & Easy, The Who's BEST song, in place of the flaccid Song is Over on Who's Next. Could do with a remix too.

Never got into Steely Dan, but they'll always have Reelin' in the Years.

TT - I have Tonight's The Night vinyl on the turntable now. 'I'm not lonesome for those helicopter days.'

my neighbours must hear me "when I picked up the phone, and heard that he died ... out on the mainline".

The Electric Ladyland cover was recreated as a pointless and gratuitous scene in The Boat That Rocked. which I loved.

AOD has just blogged on the nurse in London if you want to come over and make corrections.

Tony:
I'm a big fan of Everybody Knows This is Nowhere and On The Beach and rank Harvest behind After the Goldrush in the Neil Young canon - still, that's four pretty good albums plus Tonight's the Night, which I haven't heard but will now.

AOD:
I can't remember the scene in The Boat That Rocked but there's been some funny recreations of an album cover Hendrix himself disliked.