Bob Dylan:
Highway 61 Revisited - Positively 4th Street
This post is part of a series where I piss-fart about, quite gratuitously, with the track-listing of some great albums. 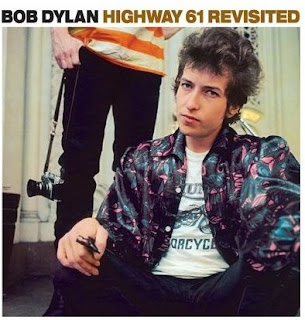 Although this is the album that is often perceived as Dylan's breakthrough electric opus, he'd already gone electric on the previous LP Bringing It All Back Home, his fifth, where side one opens with Subterranean Homesick Blues. But then, there are so many misconceptions about ol' Bob it's no wonder he seems to hate his fans at times and doesn't mind showing it.

It starts with the hard snap of a snare drum - the instantly recognizable opening of Like A Rolling Stone. Al Kooper was just there to observe the sessions but ended up playing the distinctive organ riff that makes the song so special. The lyric is a denunciation of a woman Dylan knew, and both Joan Baez and Marianne Faithfull have been suggested as the song's subject.

Dylan would continue the sneering with the similarly-themed Ballad of a Thin Man to close Side One of the original LP release but before then gives his characteristic black humour a run with Tombstone Blues, reminiscent of Subterranean Homesick Blues and much of his subsequent album Blonde On Blonde.

It Takes A Lot To Laugh, It Takes A Train To Cry is the album's only ballad but Queen Jane Approximately is a song of caustic yearning, the humour returns in laugh-out-loud proportions with Highway 61 Revisited and then there's the edgy but still poignant Just Like Tom Thumb's Blues.


I won't argue with Rolling Stone, who ranked this LP at 4 on their list of The 500 Greatest Albums of All Time. It's a pretty sensational collection, after all. 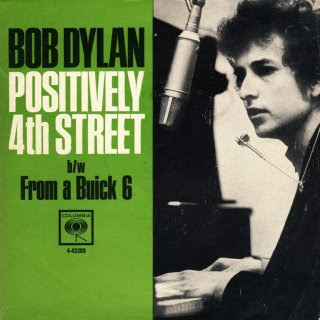 So could it be improved? I think so, yes. And including the single Positively 4th Street would do just that. This song is almost a fraternal twin to Like A Rolling Stone: there's organ here too and the same kinds of lyrical and musical tones and themes which would enable it to fit very nicely on this album.

If you'd bought Highway 61 Revisited on its first release and thought highly of Like A Rolling Stone, then Positively 4th Street would have seemed like an almost perfect follow-up single. The two songs seem to go together in the same way that the Kinks' You Really Got Me and All Day and All of the Night do.

Positively 4th Street is generally held to be disparaging the Greenwich Village folk crowd who accused Dylan of selling out when he went electric and eschewed the folkiness of his earlier output. The main subject has been postulated as Bob's ex-girlfriend Suze Rotolo, the beautiful young woman on the cover of The Freewheeling Bob Dylan, but like much Dylanology, this remains unverified. 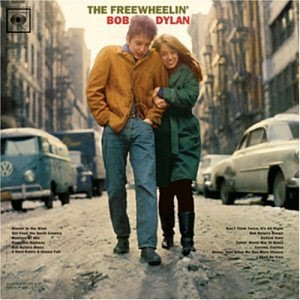 There you have it: a great album just got even greater. Thanks to me.

So Which Tracks Would Miss Out?None, just shorten Desolation Row a little - there's no need for a song to run for 11 minutes for chrissakes.
Posted by Lad Litter at 18:30

people who are stoned off their faces just love 11-minute songs.
KASHMIR !

I have read Suze Rotolo's book, and the book titled 'Positively Fourth Street'. I think the derision was aimed at the folkies of Greenwich Village who turned on Dylan when he went electric.
The organ just makes those tracks
(also think about Winwood/Traffic organ sound).

Dylan's ouevre is pretty much all derision and sneering come to think of it, yet he is adored.
He's got a lotta nerve to think we are his friends.

I can't really add much to the conversation, but the word verification is fluffig and I felt it shouldn't go to waste. So redo 'Desire' for us.

M-S:
I'll look out for Suze's book - I read Positively many years ago and it contained interviews with folks from Dylan's past - including THE girl from the north country.
And that last line of yours tops the whole post! Brilliant.

Phil:
Revolver is up next. Desire is pretty much self-contained, except that Reuben Carter DID do it.

I am now thinking that the appeal of The Band, Mike Bloomfield, Al Kooper, etc., is what got Dylan over my line.
My Last Waltz.
Just this minute put down book on Leonard Cohen - A remarkable life, by Anthony Reynolds, and it was full of people saying he was nice, but everything about him said he isn't.
At least with Keith Moon and Brian Jones, we knew where they were at.

What happened to them? Now it's all bad new songs in the bad new days.