This is what I've got on the 6-stacker CD player in the car at the moment. Not a bad sequence of albums.

Blonde On Blonde: Bob Dylan
why it was initially disappointing but is now growing on me

Look closely at the front cover. Let your eyes go out of focus a little bit. Could you do what the young woman in the record shop did when she saw me purchasing this album? Could you exclaim "Oohhhh, that old Dr Who has a CD out?" I suppose not. 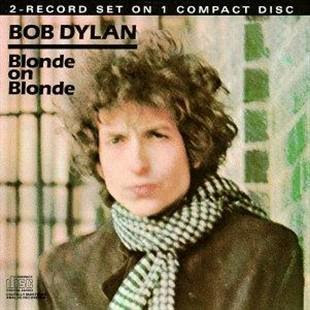 This 1967 double album, the first two-record set release by a major rock artist, is something of a wine-dark sea, running a disappointing gamut from the dirge-like ragtime of Rainy Day Women to the novelty-song-only Leopard Skin Pillbox Hat. In between, there are some good, but not great songs, like Stuck Inside of Mobile and Juat Like A Woman. But even the pretty good songs like Sad Eyed Lady of the Lowlands are ponderous and overlong.

So even though it's regarded as a classic, and is 9th on Rolling Stone's 500 Greatest Albums of all Time list, don't let that fool you. It's really for fans only. I suppose you'll have to count me in with that lot because bugger me but it hangs together quite well after a few listens.

Led Zeppelin II: Led Zeppelin
how I'd forgotten what a great album this was

Alright, I'm still a rock snob. But not nearly as much as I used to be. Back then, I'd go out of my way to downplay this album, and the even more popular Led Zeppelin IV. The true rock snob, you see, will inevitably elevate the lesser works of great artists over their better-known classics. So where Led Zeppelin are concerned, it's their eponymous debut album and Led Zeppelin III that get all the rock-snob praise. 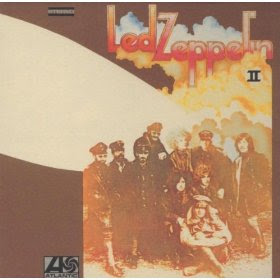 And after not having listened to this album in its entirety for well over thirty years, my vestigial rock snobbery had convinced me that it wasn't any good. Wrong. Dead wrong. This 1969 release is a great album that combines Led Zeppelin's blues credentials with the heavier spheres they were taking rock into on the ubiquitous Whole Lotta Love, Heartbreaker, Living Loving Maid, The Lemon Song and Bring It On Home. And just a dash of English-folk-inspired balladry as well on What Is And What Should Never Be, Thank You and Ramble On.

And here's a tip - try to imagine the impact it would have had if you were hearing it for the first time back when it was first released. That makes it even more mind-blowing.

American Beauty: Grateful Dead
how you can like an album a lot, even in spite of itself

They're an elusive lot, the Grateful Dead. Their archetypal psychedelic album, Anthem of the Sun (1967), is something of a stinker but this 1970 release seemed to be pretty highly regarded. So I bought it and immediately felt I'd been taken to the cleaners. It's country rock of the type that all of the old psychedelic acts seemed to be making around the 1969-70 period. But on first listen, it was just too cornpone, and at the same time phoney, like they were cashing in on a fad. And then I kept listening. And grew to appreciate it.

During the recording of American Beauty, Jefferson Airplane, CSNY and the New Riders of the Purple Sage were all using Wally Heider's studio complex and the Dead took a little comfort from all of them to infuse this album with its unmistakeable feel.

The opening track, Robert Hunter and Phil Lesh's Box of Rain is just a beautiful song. And the rest of the album flows nicely from there. With plenty of pedal-steel and mandolin. The country-rock flavour is more rootsy than what other acts in that pantheon like say, Neil Young were producing at that time, so I think it's probably a bit less accessible.

The cover contains an ambigram - you can read the title lettering as American Beauty or American Reality - wow!

Burn: Deep Purple
I am nothing if not self- indulgent

I would probably not like this 1974 album, the first from a new Purple lineup, all that much if not for one thing: the singing of the new guys - vocalist David Coverdale and bassist Glenn Hughes. There are a number of songs where they share lines in a call-and-answer type way and the counterpoint their two very complementary voices provides is quite thrilling. 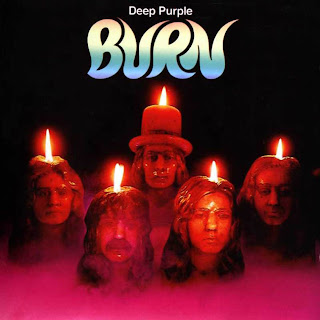 The title track is a riff-driven, first-growling, then screaming classic. Might Just Take Your Life and Lay Down Stay Down both rock right out, putting Hughes up front with Coverdale. And let's not forget Mistreated, another Blackmore masterwork.

I don't think this album will do for everyone, though - it's an indulgence of mine, or at least the part of me that still thinks tight pants and shoulder length hair and the music that tends to go with them, are really cool. Funny thing, the mastering makes this a very loud album. I usually have to turn the volume down a couple of notches when it comes on. But not always.

I bought The Best of Joe Walsh when I was about 17 and thought it might be about all I'd need from this guitar slinger. Look how wrong you can be. 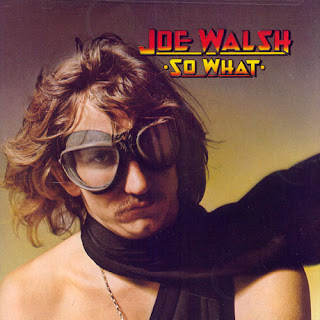 I've always been an admirer of Joe's guitar playing (a languid-sounding kind of pyrotechnics) and his singing grows on you in a Dylanesque kind of way. The definitive version of the classic Turn To Stone appears here, as do other Walsh live staples as Time Out and Help Me Through The Night.

A few of his soon-to-be bandmates from the Eagles sing backup, and the album showcases the variety of influences Joe Walsh has always brought into play.

But if you skip the drunken All Night Laundromat Blues, I'll understand.

Stripped: Rolling Stones
why I wouldn't ever dare disparage these guys

This 1995 album is just superb, and I'm the kind of Rolling Stones fan who still refers to Ronnie Wood as "the new guy" after 35 years. There should also be a DVD - bugger me it was shown on TV in about 1996 - but the Stones are nothing if not enigmatic about DVD releases - the 1968 Rock 'n' Roll Circus wasn't released until 1996 and 1974's Ladies and Gentlemen: The Rolling Stones has only just made it into the shops. 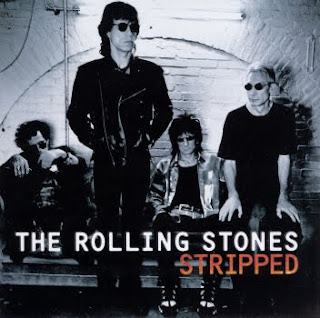 The title is a play on the "unplugged" phenomenon, which was just about running its race by this time. But it isn't The Stones Unplugged, or even playing stripped-down versions of their hits at all. No, this is very much a beefed-up Stones from what live audiences had come to expect from them.

You see, the Rolling Stones have always stripped down many of their songs into loose arragements of the original for their concerts. Mick Jagger sometimes seems to be phoning it in, slurring further his already slurred drawl. And then they're also the kind of band you need to be hearing on a good night, too. During the same Voodoo Lounge Tour that produced this offering, I saw their second show at the MCG and was very pleasantly surprised at how good they were.

But for this album, they revamped the set-list for boutique live shows and recorded some less well-known early songs like Spider And The Fly and I'm Free live in the studio. The result is, put simply, the Stones as you've probably always wanted them to be.

The opening Street Fighting Man has much of the feel of the original studio recording restored and on Angie and Wild Horses they've gone to some lengths to come up with exciting guitar arrangements that are faithful but still varied enough to make you sit up and take notice of what Keith Richard and Ron Wood are doing. This applies across the whole album as they take a lot of care over Let It Bleed and Sweet Virginia.

But there's a standout - they do a sensational cover of Dylan's Like A Rolling Stone!

I won't kid you - this is the kind of album sequence that makes me look forward to driving. And has me jumping in the car on the slightest pretext.
Posted by Lad Litter at 13:15

I have just come from blogger Daisy DeadHead which is amusing synchronicity.
I loved B on B, but that was with my 1967 brain. If I heard it today for the first time, maybe not.
Then I hadn't read the EDIE book of course.
I got Keef's LIFE for Christmas and was blown away. the first highlight is the sweet and long letters he wrote to his aunt during their first US tour.
The second highlight is the endpapers photo of all the LP spines in his record collection which is identical to a record collection i used to have (when i had a home)
peace and love from Ballarat
(this week, Kyneton next).

Yay! Someone else who still uses the CD player in their car! I don't feel so alone anymore.

Best song on Blonde on Blonde: Visions of Johanna.

M-S:
I'll never have a high opinion of Blonde On Blonde but I will get used to it. The Keith book is on my amazon wish list. Enjoy Kyneton.

SCW:
Can't get away from the idea of owning an album and playing it as such. The car is all I have!

AGB:
Visions of Johanna is one of the better tracks alright. Longer than it needs to be though.

I'm down in Virginny with your cousin Lou ... and there'll be no wedding today.

Wishing you and yours a rocking good New Year.

AOD:
Happy New Year to you and yours too! I was listening to Beggars' Banquet this week:

Oh the gal I'm to marry is a four-legged sow, I've been soakin' up drink like a sponge...

Led Zeppelin 2 was always a favourite of mine. Rather similarly, Deep Purple's Fireball. Back in those days I found myself turning off bands as they became ultra famous. Certainly did with Creedence, where I reckon the first (epynomous) and second (Bayou Country) were best. With the Stones, Get your ya ya's out is still great rock 'n roll to my ears. But there's a couple of others in your stacker that sound appealing. And yes, I too still play CD's in the car.

Definitely could mistake Dylan in that photo for Tom Baker (the Dr Who everyone usually remembers for some reason). Even without squinting my eyes. Good to see some changes on your blog and style too Lad...
And just when you think I'm gone for good...

Phil:
I understand Fireball is an underrated Deep Purple album. I was chatting about it with a mate on NYE and he sang its praises. I'm partial to Stormbringer and Come Taste The Band too.

Edward:
You're back in action. And a good thing too. I was back in traction for a while there but recent purchases of some interesting albums have got me going again. My wife refers to them as "weirdo marijuana music". That's the seal of approval for me.