Some Classic Albums: The Good, The Bad & The Ugly I: The Good

I was almost resigned to a relatively music-free existence. We had nothing at home even remotely up to date in the way of a sound system and I'd been reduced to playing CDs through our less-than adequate desktop PC, and even then only when home alone. Too many complaints about my "weirdo music" y'see. It was like being in my early teens again, only with a lot less hair and fewer pimples.

My CD catalogue was limited, and overshadowed by my vinyl collection and my most recent el cheapo turntable had given up the ghost years ago. No matter, I wasn't listening to much music anyway.

But as luck would have it, we needed a new car. And the one we settled on came with a six-stacker CD player. I was back in town! 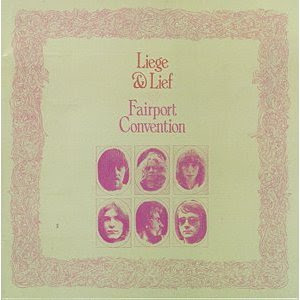 This is just a superb album. On first listen, I immediately regretted not getting into Fairport Convention about thirty years earlier when a drummer I knew couldn't shut up about this seminal English folk-rock outfit. The drummer had been into Led Zeppelin, and because Fairport Convention singer Sandy Denny had sung so beautifully on their song Battle of Evermore from the album Led Zeppelin IV, it made sense to him to explore her regular band. And become a big fan.

I'd listened to a few bands that had accommodated the English folk influence. Bands like Wishbone Ash and Led Zeppelin. I'd also listened to a bit of Steeleye Span as well, who had formed late in 1969 by way of a breakaway from Fairport Convention.

Liege and Lief represents the realization of a group decision to concentrate solely on English folk-derived rock music in the wake of a terrible accident. Their drummer, Martin Lamble, and guitarist Richard Thompson's girlfriend had been killed in a motorway accident in the band's van early in 1969 and the surviving Fairport members were unsure whether to wind things up or keep going. They decided to continue, but to make themselves stand out from the folk-rock crowd by delving into English folk. Their previous album, Unhalfbricking, had been a success with some of that influence present among some more contemporary folk stylings and a couple of Dylan covers.

Pleasingly, for those among you who might be a little skeptical about English folk, there's not too much "diddly-diddly" on this album. It kicks off with the rollicking Come All Ye, where Sandy Denny's pure as snow singing is beautifully complemented by some earnest backing vocals and Dave Swarbrick's rich, melodic violin. While some might find the unwavering intensity of Denny's voice across this album a little too much of a good thing, it somehow manages to fit the character voices in the traditional Matty Groves, perhaps Fairport's signature tune, without changing at all.

She continues with Richard Thompson's poignant Farewell, Farewell, and the anti-war ballad The Deserter. The instrumentation is arranged especially handsomely for the urgent, halting Tam Lin, and further augments Denny's voice without ever overpowering it on the last track, the despairing murder-ballad Crazy Man Michael.

Both Denny and drummer Dave Mattacks would depart soon after this album to form Fotheringay and Steeleye Span respectively, thus expanding the English folk rock universe. But while Fairport Convention would continue for the next three decades, Denny was to die tragically after a fall at home in 1978 at the age of 31. Thankfully, her beautiful voice lives forever.

UPDATE!:
This clip is a slideshow backing the song Farewell, Farewell from the album. 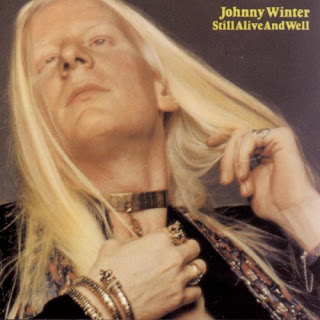 Guys I knew when I was a teenager back in the 70s were into Johnny Winter. Guys who were, like me, right into the blues. So I knew he was a Texas born-and-raised albino with a similarly pigmented keyboard-playing brother named Edgar, that he was famous for slide guitar, that many great players rated him highly, that he had a long association with Rick Derringer, and that he liked to do Rolling Stones covers. But somehow, I just never got around to checking him out at all.

And as with Liege and Lief, here was another album to evoke the question "How Long Has This Been Going On?". In Johnny Winter's case, since his childhood: he and brother Edgar were a popular duo on Texas country radio during the late 50s. They were also one of the acts at Woodstock but didn't make it onto the original film, only the 40th Anniversary Edition.

1974's Still Alive and Well was titled in response to a rumour that Johnny had died, as his hard-living, abusive lifestyle was common knowledge. Produced by Rick Derringer, the album features an affecting version of his almost-misogynistic Cheap Tequila. Winter adds a stinging rendition of the ubiquitous blues Rock Me Baby and the authentic soulful country ballad Aint Nothing To Me. The title track and covers of the Stones' Silver Train and Let It Bleed are great blues flavoured rock tunes, the way he does them.

This is a fine album, well worth purchasing and if you're anything like me, you'll feel a pang of regret that your older sisters' boyfriends didn't get you into Johnny Winter sooner.

This clip is from a Johnny Winter live appearance on German television in 1970. The Song is Mean Town Blues.

while you're catching up with early 70's brits do check out one of my fave albums Shoot Out The Lights - Richard & Linda Thompson.
about the time I liked them, I was also playing The Dransfields.
an aussie was in Steeleye Confusion* - trevor somebody i forget now. lucas?

There's so much good old music, i don't know why new people bother.
tonight I witnessed 65 seconds of Kylie on TV and was reminded she really really cannot actually sing.
maybe she has never heard Aretha, janis, the wilson sisters do barracuda, jeez I dunno.

*Fairport Span - all a jumble to me.
but i did have a cup of tea once with Maddy Prior.

Shoot Out The Lights was recorded when R & L were breaking up, and it shows, in a good way. IF I was a rock crit wanker I would say "searing" and "excoriating". But I'm not, so I won't. I just like the album.

I prefer Unhalfbricking to Liege & Lief, but I am 100% behind you with the diddly-diddly. Now, can we please get rid of the Celtic flutes, etc, which underpin any and every modern fillum set prior to 1900.

Fact! At last count there had been 12,471 band members circulate through Fairport Convention since their original incarnation in 1967. Dave Mattacks alone has been in and out of the band an astonishing 78 times.

AOD:
Jesus, Mary & Joseph the life you've led, I mean really! Tea with Maddy Prior, no less. I love the Span's And Now We Are Six and don't mind at all if Span and Fairport are indistinguishable at times - I can like both.

Richard Thompson is one I'll have to pursue, so highly regarded is he by those whose taste I respect. And I've always delved into the past, in music & literature - if it stands the test of time it's worth so much more.

Tony:
It's a genre ripe for parody, but all the richer for withstanding it. Unhalfbricking is a recent purchase and I've got it on high rotation. I like it a lot already and thanks for the further recommendation on the Thompsons.

The diddly-diddly thing was one reason why I could never come at the Aussie bush music explosion of the 80s and early 90s.

Little Feat & The Flyin Burrito Brothers are still going, having had similarly comprehensive lineup transfusions. As long as they stay faithful, that's fine by me.

woo hoo - that Annie can rack anything up a notch - she sat knitting with guitarist Albert Lee once (he had it, not AOD). both hiding from the pron films at a Virgin function in France.
Maddy despaired of getting decent tea in LA, even at the legendary Hyatt where Lauren Holly made it in 1976 for her/them/us.
Going down in the elevator, there they all were "oh wow Fairport Span"
and they said "we just going to Burbank to film TV piece, please do come with us". rock n roll.

Tony: not only ShootOutTheLights but ARRIVAL is ABBA's brilliant breakup album

Great post, truly, but I have heard of hardly any of them! And, I thought I had a fairly good overall knowledge base! Evidently not!

FG Marshall Stacks:
That would've been great meeting those guys in France & LA. More shameless name-dropping, please! I would.

Ms Smack:
These are acts known to self-absorbed Late Baby-Boomers like me that I just never got around to checking out. Neither Fairport Convention nor Johnny Winter would've appeared on your radar. It would be like me going back to listen to Hank Williams. Good music though.

re shameless name-dropping: it really should not be done unless the names actually send cards or invitations after the event. Someone should tell Meldrum that.

OK can't match the intimate knowledge but I have a very close once-was muso friend whose first-born was named after Maddy Prior.

We had a number of blokes in high school who were into the blues so we knew of the Winters. My long-lost LP collection included Ten Years After and also a "British Blues" compilation on the Immediate Label with Bluesbreakers, Savoy Brown and a pickup band with Clapton on lead, Bill Wyman on bass and a couple of other notables. I've looked and looked to find it again but no dice.

Phil:
Thanks for that. Yes, I went crazy on Ten Years After after seeing them in the Woodstock movie and acquiring a copy of a double-live album of theirs. The Clapton-Wyman blues lineup sounds intriguing - I'll search it out and let you know.

1. everything goes back to The Country Blues. ref. the Lomax bros field recordings, and god bless Furry Lewis (who made a cameo in W.W.& The Dixie Dance Kings).
2. really I do know B.B.King from Albert King and Albert Collins and I don't know what happened re Alvin Lee (above slip-up) it must have been the knitting that threw me.

Thanks LL. The album had other bands as well, of similar ilk from that late 60s early 70s period. Very listenable.

FG Marshall Stacks:
Okay, I get you now. You wouldn't be the first to get your Lee's mixed up.