Why I Play Cricket

I'm going to try not to sound too defensive about this. But I have to concede it's pathetic really. Playing cricket at my age. Sure, I can rationalize it in any number of ways: important exercise for a bloke in a high-risk age group; worthy community involvement; the opportunity to coach and mentor junior and less exprienced players; making some kind of contribution to the club's on and off-field fortunes. All very altruistic. But it's far simpler than that. And much more selfish.

I'm really only there to play. Deep down. All the rest of the involvement, from Junior Co-ordinator and U12 Coach, through Committee membership to part-time barman, bin emptier, sausage-sizzler and raffle organizer is just what you get caught up in when you play, and I would have a whole lot less interest in any of it if I couldn't take to the field myself.

I'd been toying with the idea of giving it another go for a couple of years but when I had a disc removed at the age of 37, (L1-S5: right down at the base) I could feel the curtain coming down. Surely you can't bowl with a fragile back? Jesus, I could hardly run. Anything could go wrong and probably would. So I forgot about it. A few years later, Moe and Larry were enjoying little kids Milo cricket and I rolled the arm over at them in the park and the backyard. Shit! That felt alright! Maybe next year I could give it a go. Just a couple more seasons, enough to bring up the 100 games - 100 wickets double that I was close to when I stopped playing at the age of 25. Then I'd have it all out of my system.

The 2004-05 season approached, but as it turned out, my youngsters weren't interested in playing. Well bugger the pair of you then. I'll play. TLOML was not impressed. She hates cricket. Finds it boring, pointless and can't for the life of her understand why everything has to take so long. I was accused of having an idiotic mid-life crisis, trying to recapture lost youth, being pathetic. It was ridiculous. And didn't I used to make duckies or whatever you called them all the time? Well, yes. But I had a significant debating point ready to launch.

"Alright then, it's either the kind of mid-life crisis where I want to play cricket again, or some other kind where I want to buy a sportscar or try to pick up women on the internet. You decide."

We both had a good laugh about that, especially when the frypan she threw bounced off my head at a funny angle. I figured with that kind of support, I'd be mad not to pull on the whites again.

And so at the age of 44, with only two blokes remaining at my old Moonee Valley Cricket Club from the fellows I'd played with previously, I turned up for pre-season training. And I don't mind telling you I thought picking up where I left off would be a mere formality, thank you very much. I would bowl accurately and decisively, field competently, and put together the occasional defiant tail-end innings when the team needed it most. But cricket had news for me. 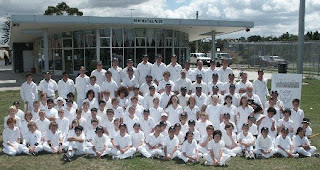 Most of what few skills I'd originally possessed had evaporated. I couldn't withstand opposition bowling long enough to make many runs. Sometimes any runs. And just about every opposition batsman delighted in belting me back over my head for six. At least I could still hold catches, thank Christ. All of this should have been devastating for me, but I was able to rationalize it thus: we're getting shitted on; I'm not having much impact or success at all; but it's a nice warm day; there's a gentle breeze blowing; and I love cricket just enough to feel happy about being a small, spectacularly unsuccessful part of it.

I spent the next two seasons captaining the Fifths, a development XI consisting almost entirely of junior players wanting to get a taste of senior cricket. Pete, a bloke of similar vintage to myself, joined me on mentoring duties. 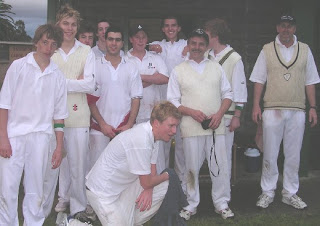 The development XI was an interesting idea and Pete and I were really committed to it, but it didn't quite come off. We were thrashed just about every week and no-one played up to their potential. That led to a lot of the young fellows piss-farting about. In the end, the club decided to discontinue the concept after two seasons and just spread the juniors out where they would be of most benefit. I was actually glad of this, as I have never really enjoyed captaincy. It tends to make a complex game that bit more complicated.

But despite lack of team success, my own form had seen small incremental improvements. A few more runs here, a few more wickets there. So I hoped to stay in the Fifths and concentrate solely on batting. Let the young tearaways have the ball. But the new Fifths captain had other ideas. He wanted me to concentrate on bowling. Alright, if you insist. Taking my run-up back to its original length gave me a refreshingly balanced approach to the wicket, and I just tried to keep the seam upright and let the oncoming breeze and the shiny side of the ball do the rest. And it worked. I found myself in the unfamiliar position of being afforded something that seemed awfully like respect for chrissakes, by opposition batsmen. 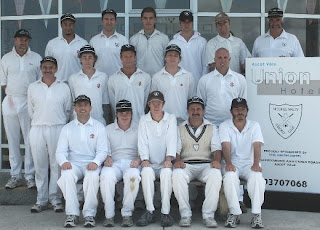 I took wickets in every innings bar one that season to win the 5th XI Bowling Award. And played a couple of decisive innings with the bat too. So I fronted up at the start of this season just gone in better touch than ever. Shit, they even promoted me! All the way up to the 4ths, where I was going to be captained by a bloke I'd taught at Moonee Ponds Central School. The slightly higher standard was going to be a bit of an acid test for me, but I was able to bowl accurately for long spells (thanks skipper!) and took out the 4th XI Bowling Award to cap it off. I'd also made the backward squareleg position something like my own and held onto some hot chances from the heavy traffic that tends to go through that neck of the woods. 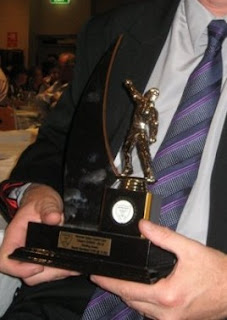 Sure, my batting had gone to seed but I was an automatic selection in the 4ths once I was established and am looking forward to next season. And I seemed to have gathered a little respect from my club mates that had everything to do with my capacity to put the ball on the stumps regularly and throw in the odd unplayable outswinger.

The 2009-2010 season is approaching and there's a chance that our 4ths will be going up a grade to play on turf. I'm very keen to be a part of it, even though it means shelling out for my first set of sprig-studded cricket shoes. The Selection Committee might decree otherwise, but I'll take my chances.

With both the 5ths and the 4ths narrowly finishing just out of the finals over the past two seasons, my tally of finals games has remained at a measly 4. And my only flag was in the 2nds back in 1977-78 where I batted last, didn't bowl and fielded behind whatever trees encroached on the ground. So I'm very keen to make just one last addition to the trophy cabinet.

Good for you! The only cricket I know about is the one that chirps in my back yard, but playing it, whatever it is, and doing it well at your age is admirable. Keep it up!

2. Get TLOYL to listen to Henry Blofeld transmitting his passion for the game. HighRiser aka Hot Andrew has just posted on HB this morning.

Seriously, good that you are still having a go, winning or not.

MZ:
Aww, thanks Madame Z! This post must have been excruciatingly boring for you so I appreciate the effort on your part. The last two posts have just been about something I really wanted to say, as distinct from something I thought readers might find interesting. Self-indulgent.

FG:
Blofeld is brilliant. I've admired him since first hearing him around the 1978-79 Ashes. The English commentators are generally very good. Sorry to hear about poor Mick. I'm just about to buy his instructional DVD on blues playing from Amazon.


*goes off singing 'scuse me while I touch the sky ... with this 6 right over the scoreboard ...

That Hendrix album will be going straight onto my Amazon Wish List, thanks to you. I have the Complete Monterey Pop Festival 1967 DVD which features the complete performance of the Experience at that seminal festival - introduced by Brian Jones too!