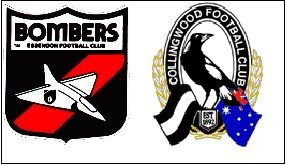 I had to drive over to a house in Nth Sunshine to pay $50 for 2 tickets to the 1984 Preliminary Final. Retail for two tickets was $30 in 1984. Essendon were playing Collingwood and, needless to say, both camps were confident, general interest in the match was high and a place in the Grand Final against the formidable Hawthorn was up for grabs. So tickets were hard to come by.
My Collingwood mate Frank and I had despaired of finding any luck in an exorbitant scalping environment. We'd even resolved to drive to Albury in the hope of picking up the game live on TV in a pub. But then on the Thursday before the match I decided to give the Age classifieds one more try and hit pay dirt with two tickets only $10 over the retail price. So we were off to VFL Park, Waverley.
Collingwood had defeated arch-foe Carlton in the 1st Semi-Final while Essendon had fallen just 8 points short of Hawthorn in the 2nd Semi, a game which many commentators were describing as one of the best they'd ever seen. In the two previous Bomber vs Magpie encounters that season, Essendon had recorded comprehensive 10 and 6 goal wins. But Collingwood were not to be denied. On their day, they were tenacious and determined. Deep down, no-one gave the Magpies even a ghost of a chance. But as is the way with the football media, everyone seemed to be doing their darndest to talk the mismatch up.

Essendon would go into the game with a full-strength lineup and stars Madden, Watson, Daniher, Baker and Neagle all at the peak of their considerable powers. By contrast, Collingwood were weakened by the absence of the injured Cloke and Taylor and then suffered a further blow when David Twomey was a late withdrawal.

Ex-Essendon champ Ron Andrews kicked the first goal of the game for the Pies but that was where the fun ended for Collingwood. Because Essendon recovered from this early aberration to lead by 84 points at half time. That is a whopping big margin. Even for the end of a game, let alone half-time. 14 goals. There's no comeback from that far down. All hope is lost.


And so during the main break, the aisles were just awash with departing Collingwood supporters, retreating from an ignominious defeat. It looked a little like one of those mouse plagues in the Mallee, an almost liquid movement of masses of people. And it seemed as though in every section, there was at least one drunken scumbag Essendon barracker standing up on his seat and pointedly jeering them off with gales of theatrical laughter. I confess I had a bit of a giggle too. Especially after one wag started calling for all of the Collingwood bus drivers to return to their vehicles.

Whadda you reckon: time to light up a joint fellas? Experience a glorious Bomber victory under the influence? There was no dissent. Even staunch Magpie Frank adopted an air of insouciant resignation and had a few choofs.

The slaughter continued in the second half until siren time when the final margin was 133 points. Baker had kicked six classy goals and Van der Haar with five managed to feature in the votes from many commentators even though he was off injured just before half-time and didn't reappear. So big was his impact. Check out what a spectacular player he was in this career highlights montage:


But I had to take my hat off to Frank. He'd stuck it out. The greatest humiliation in finals history. And more was to follow. Because no-one was going anywhere in a hurry.

We had Waverley down to a fine art in those days. The ground was famous for its post-match traffic snarls but we'd worked out a pretty good way to circumvent the problem. After the final siren, we'd make a leisurely stroll across the oval dodging ill-directed footies from the hundreds enjoying kick-to-kick. Through the gate on the other side of the ground and into the members, making a bee-line for the Brownlow Bar. It was always crowded but you could usually find some space and watch the replay which started about five. Then at around 7, you could wander out and have no trouble whatsoever finding your car, even in the pitch dark.

That was the plan and we stuck to it. The crowd in the bar started to thin out around 6. But we were in no hurry. Numerous rounds of drinks punctuated by loads of laughter and back-slapping provided an exultant backdrop for the TV review of Essendon's massacre. By 7, we were the only ones left and thought the bar staff would be asking us to call it a night. But they kept serving us, so we fell into line with this welcome new policy.
A little while later, all these people started to come in. Collingwood people. Collingwood players and officials. All filing gloomily in for their post-match meal. In 1984 the quarantining of players from mug supporters was a little more haphazard than it is today.

It was my round next so I asked the bloke behind the bar if he wanted us to make tracks, seeing as how we were almost gate-crashing an official Collingwood function. Not at all, according to him. We'd be welcome to stay a bit longer. So we went through a few more rounds. David Cloke walked past with his arm in a sling. General Manager Peter Bahen tried to put a a brave face on things, but there just wasn't anything at all for them to be upbeat about. Seated between the official party and the bar, we weren't exactly sure how to conduct ourselves so we toned down the celebrations a bit.

But only a little. The Collingwood mood was in such stark contrast to ours that you just couldn't help but see the humour in it.

One bloke who looked like ex-Magpie hard man Kevin Grose seemed keen to make lingering eye-contact with me. I'd look away, have a bit of a chat and then steal a glance back at him and blow me down, his intent gaze in my direction never wavered. And I don't think it was because he fancied me. What to do? I know, I'll make friends! So I raised my glass to him, and winked and smiled a salutation. He started to get up and I was already mentally phrasing a suitably contrite apology for my clumsy social skills but I wasn't confident of avoiding some expensive dental repair work when someone at his table shook their head at him and he figured I wasn't worth it and stayed where he was. I've since thought seriously about having it registered as a near-death experience.

But eventually, there came a lull. It was caused by us all getting the giggles at the same time and trying desprately to hold it in. You could hear a few of those high pitched snorting sounds where the air gets caught in between nose and mouth while you're trying desperately to stave off a guffaw. It was no use. Someone spoke without saying anything particularly funny and the floodgates opened. Huge squalls of laughter erupted and we just couldn't stop. Some of the blokes had tears running down their faces. A Collingwood official signalled to the barman that it was about time we made our way out of there and so we bid the friendly and tolerant bar staff a warm farewell and went off into a cold night that somehow didn't chill us at all.
The following week, Essendon would kick nine goals in the last quarter of a hard fought Grand Final against Hawthorn to record a come-from-behind-win and claim their first flag in nineteen years.
Posted by Lad Litter at 21:02

Love Van Der Haar's "don't want to footy and never did" attitude. Bit like how I feel about my job.

That's a good story. Some quality mullet action in those vids too.

Welcome aboard! Vander was laconic in a way many Aussies like to think they are, but aren't.

a fit of the chortles after All That Beer and nobody wet theirselves?

and no Designated Driver?
and were youse too drunk to find the car?

I saw Collingwood play Essedon
(Coleman, Barrys Capuano & Davis)
about 1964 and Ray Gabelich trampled me after the final siren. I was sober.

Q1. Ah, but I had a sphincter you could crack walnuts with in those days, Brownie.

Q2. I'm pretty sure I was the designated driver - and so mustn't have drunk nearly as much as my companions.

Q3. You weren't the only one to feel Gabbo's wrath. It was a different game then. Sigh.