Great Gigs III: Jeff Beck At the Palais; January 2009; Finally He Gets To The Actual Concert 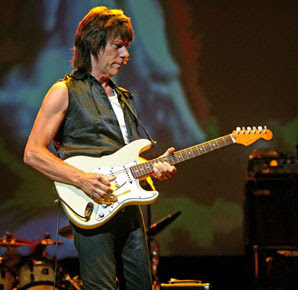 It was Australia Day and I'd spent the warm summer afternoon with the bands at the nearby Big Day Out concert providing a droning sonic backdrop to a bit of incompetent gardening. I headed over to Pete's place in West Brunswick but I was a little late so we had to sneak a hurried choof at the tram stop in Dawson St on the way in to the Palais for the Jeff Beck concert. You can do it in public if you're smart about it. We'd rolled the tobacco out of a couple of Stuyvos and packed in a fairly potent mix so that to the casual observer, it's just two baby-boomers smoking cigarettes.

I love the Palais. I saw Joe Cocker there in 1977 and Rory Gallagher in 1980 and both times the sound was excellent. It's a great acoustic venue, so I was looking forward to getting the best of Jeff and his band. 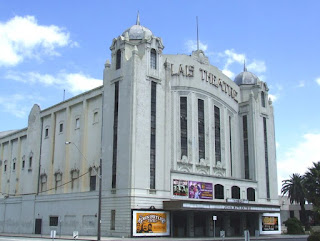 They would be Tal Wilkenfeld, a 22-yo Sydney bass player about whom it's often mistakenly asumed that she's Beck's daughter. Her resume includes the Allman Brothers Band, Chick Corea, Steve Vai, Susan Tedeschi and Herbie Hancock. Vinnie Colaiuta, ex-Frank Zappa band, would be on drums and David Sancious from the E Street Band was to be on keyboards. No singer.

And that's what made me a little apprehensive. As I mentioned earlier, the stuff I was most looking forward to hearing him play was from his Yardbirds'; Jeff Beck Group; and Flash periods. If he was just going to do what he's into right now, that could be anything. And that's exactly what he indicated to Kerry O'Brien in this interview on the 7:30 Report.

So the concert would only be a limited retrospective of Beck' career. Nothing with vocals. This was disappointing. I like Beck's jazz-rock stuff, but I don't love it. Still it would be good to see him, even if he wasn't playing any of my faves. As an artist who has always prided himself on progressing, his playing was bound to be top class.

With sniffer dog resources otherwise occupied at the Big Day Out (thanks for taking the heat off us, youngsters!), Pete and I were free to have another quick choof outside just before Jeff was due to take to the stage. We stood apart from a relaxed crowd that were mostly male and from our age bracket but there were some refreshingly young and decidedly female concert-goers scattered through the ranks as well.

He opened with Beck's Bolero and all apprehension just melted away. He sounded sensational, as completely in control as any player I've ever heard. He used that big thumb of his (having eschewed picks since 1980) on a white strat and worked the wang bar and volume control on just about every note. He was faithful to the original, but showed how far he'd come since the original recording in 1968 by varying it just a little too. By the time he'd finished that opening number, my misgivings had shifted to whether we as an audience would be good enough to do him justice.

Have a look at this clip to get an idea of just how beautiful his playing of this signature tune was:


And I realized he really didn't need to trawl through his history to produce a completely satisfying performance. As the review in Undercover would very aptly summarize, it was "Jeff Beck displaying his craft, not his catalogue" And display it he did.

From Beck's Bolero he took us through all of his best instrumental work, from the 1975 Blow By Blow album to more recent efforts. And he was magnificent on all of them. From the haunting Cause We've Ended As Lovers all the way to his take on the Beatles' A Day In The Life for his second encore.

He seemed to be having a great time too. When someone called out "Go Jeffrey!" during a beautifully rendered piece of delicate slide guitar high up on the neck, he looked up in theatrically affected outrage.

He'd said not a word till right at the end when he introduced the band. They'd proved themselves terrific musos, a really hot outfit, and drew sincere applause from the crowd. And then when it was all finally over, a simple "Thank you. Bless your hearts."

No, bless you Jeff. I felt like I’d been privileged to have been there. Readers, this series isn’t called Great Gigs for nothing.

You can check out other peoples' take on the tour here, here, here and here.

But it didn't end there for me. His new live album, Performing This Week...Live At Ronnie Scott's is a complete record of the concert, right down to the same songs in the same order. I bought it almost straight away and it’s been on high rotation in the car ever since. 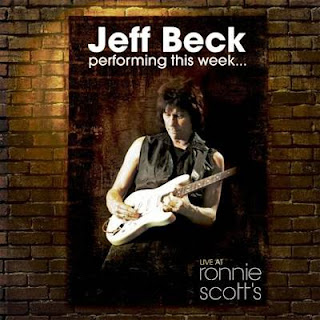 In 1965,6,7,8 I thought Ronnie Scotts club must be heaven on earth. My girlfriend worked at Braschs so we had access to all the music magazines they got by airmail, and we pored over the gig guides and 'found Melbourne wanting' in the comparison.
We lured Melbourne musos into driving us home from discos, by telling them we had the latest Cashbox and Billboard issues.


2. I followed your Yardbirds link:

"The domain yardbirds.org has expired. If you owned this domain, please contact your domain registration service provider for further assistance. If you need help identifying your service provider, visit http://domainhelp.tucows.co

AOD:
You're a living history of Australian rock music, m'dear. Speaking of which, did you see the excellent Easybeats doco on SBS on Friday night? Pretty damn good. Your topic is "If Johnny Farnham had taken up smack in 1969 instead of Stevie Wright, we'd all be a lot better off" Discuss.

As to the Yardbirds' link: I Can't Explain. Oh hang on, that was the Who. What I meant to say was, something must be Over Under Sideways Down. There, that's better

oh don't get me started on The WHO.
They were SO MOD.
Mod gods.
I loved Keith Moon, and Townshends recent issue broke my heart (again).

so much good music, so little time.

Farnham rehearsed in my south yarra flat about 1967 I think. he had a Sadie gig at Winston Charles disco and no band to call his own.
The father of my children supplied it.
I recall the neighbours being really impressed to see him, little Johnnie the plumbers apprentice of Northcote.
His horse place at Elmore looks like Kentucky high, wide and handsome.

FGMS:
You really were at the centre of things, weren't you? Don't mind Farnham the bloke, just the cabaret-style singing and elevator music backing.

Did you know Colin Hall at all? He played guitar in a regular mime-to-overseas-hits-band on the Go Show and used to do support gigs with the Strangers among others.