Des "Tuppence" Moran was shot dead today outside a cafe in Union Rd. Details here. The coverage of this tragic event on TV and radio has been disgraceful. Just as the coverage of the earlier attempt on his life outside his home in Langs Rd was also very ordinary. And raises important questions about the calibre of Melbourne-based electronic media outlets: 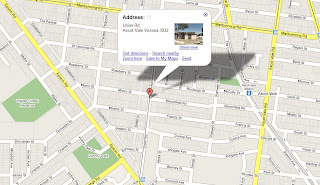 Exactly how difficult is it to pronounce Ascot Vale correctly? Give up? It's pronounced A-scert Vale, not A-SCOT Vale.

And while we're on this topic, once and for all that outer north western suburb that was still a country town when I was a young lad is pronounced Kei-la, not Kei-LORE.

And for all those out there who would dare to take issue with this pronouncement (as puns go, not too excruciating) just consider what your reaction would be to someone deciding that that well-known bayside suburb should be rendered Brigh-TON instead of Brigh-tern.
So just try that little bit harder to avoid sounding like a bunch of ignorant bogans as a matter of deliberate policy, will you?
Thanks everyone. I just know you'll do better from now on.
Oh, and of course my condolences to the Moran family.
Posted by Lad Litter at 20:10

That city in Tasmania named Hobart after a guy whose name was pronounced Hubbard.

Ya gotta stop expecting the MSM to behave like humans.

I just self checked and my pronunciations are good, except for Brighton. I have so long taken the mickey out of the name, I can no longer say it properly.

Re Ascot - the POSH POMs of course say Royal Ascctt.

AOD:
Funny, whenever I correct someone on it I get an argument. Americans don't argue when we tell them it's Mel-bern, not Mel-BOURNE.

Andrew:
Yes, that would be Brah-ton. Please continue to satirize.

AOD:
The poms are correct, as they are with Sandringh'm, not Sandring-HAM.

I haven't heard it pronounced correctly on radio or tv once yet. So the Bogans lead 5-0.

Where do you stand on the word controversy? I say it's contr-ov-ersy, not contro-versy.

Our friendship could depend on this, LL.

And it's great to see you back.

Hey.. Look for Chopper Read on facebook and read his take on the Moran shooting.

MS:
Australia's best-selling author? He's a bit of a dial a quote, ol' Chop Chop. Loved his Underbelly review: "too much rootin', not enough shootin'"

Lovely to have you drop in.

xx I hope you and your lady are well.

The great thing about "talking" on the Internet is that no one knows how we pronounce anything (ah-nee-tin' or eanithng). The ether has no eardrums.

Too true, Madam Z. We should all be forced to spell out our posts phonetically in our own dialect, like in the novel Trainspotting. Ah, the voices we'd have then.