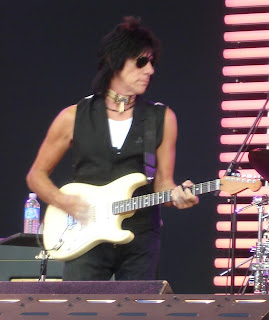 A bloke at work forwarded an email from Ticketek to me last December. Jeff Beck would be touring Australia. The 26th January Melbourne concert, and the second concert added a short time after, would both be at the Palais in St Kilda. I snapped up two tickets at around $100 each and fired off an email to Pete, a bloke I play cricket with, choof with, and have the occasional jam with. Not surprisingly, he was up for it.

Alright, I was keen, but I had to do some investigating too. I was desperate to find out just which Jeff Beck would be touring Australia. You see, he's been through some changes in a career that began when he replaced Eric Clapton in The Yardbirds in 1965. 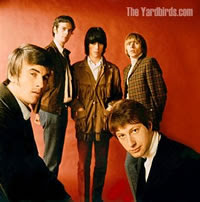 Beck was a major influence on guitar playing through his early pyrotechnic style. Controlled feedback, string muting, manipulating guitar volume, aggressive slide guitar, extraordinary use of the wang bar, and all those waow and whoo punctuations that later players like Jimi Hendrix and Joe Walsh would also use to great effect. And melodic. Beautifully so.

You can hear him at his best on a 1966 album called Roger the Engineer, which features some great guitar tracks like Over Under Sideways Down, The Nazz Are Blue and the instrumental Jeff's Boogie. 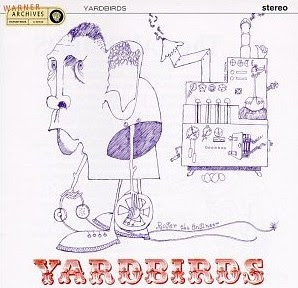 But just after this album Beck suffered burnout from the conditions on a hastily arranged and gruelling 1966 US tour and was dismissed from the Yardbirds after leaving the party to go to California. By this time Jimmy Page was alongside him on guitar and a few gigs and three songs that were recorded during their short-lived pairing were only promising, rather than what they might have been. 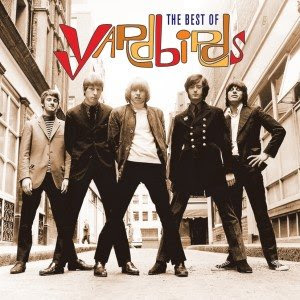 Beck's career has probably suffered by comparison with Clapton and Page. He has certainly not produced the great songs of his fellow Yardbirds guitarists. But his playing has been on an upward curve throughout. Clapton is now as good as ever but he's only got back to his best in relatively recent years after a long period as a pale shadow of the player he was with Cream. Page too, has had ups and downs but appears to be almost where he was with Led Zeppelin in the mid-70s, no mean feat.

Post-Yardbirds, Beck teamed up with producer Mickie Most for a series of largely forgettable singles, the exception being a dynamite instrumental called Beck's Bolero featuring Jimmy Page, Nicky Hopkins, John-Paul Jones and Keith Moon. Hopkins would join him for his next two solo albums, the 1968 Truth and Beck-Ola (1969). Also on board would be Rod Stewart on vocals, Ron Wood on bass and Micky Waller on drums. 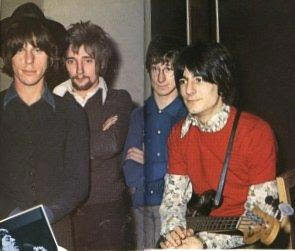 The lineup gelled beautifully on Truth and the newly re-mastered CD release showcases Beck's talent and growth. There is sensationally innovative playing across a range of styles, mostly blues-rock, on such songs as Shapes of Things, Let Me Love You, I Aint Superstitious and the acoustic Greensleeves. However, Beck-Ola was something of a disappointment, precipitating the departure of Stewart and Wood, off to join the Faces. This downturn would carry through into subsequent Jeff Beck Group lineups over the next three years and also the one album produced by his teaming up with Vanilla Fudge departees Tim Bogert and Carmine Appice in 1973's short-lived power-trio Beck, Bogert and Appice.

Along with Eric Clapton, Harvey Mandel, Wayne Perkins and Ron Wood, he was in the running to replace Mick Taylor in the Rolling Stones but didn't fancy spending half his life waiting for Mick Jagger and Keith Richard to turn up and so concentrated on a solo project to be produced by Beatles' recording overseer, George Martin. When Blow By Blow was released in 1975, Beck had heralded the arrival of jazz-rock. His haunting instrumental cover of the Beatles' She's A Woman, replete with talk-box, even got airplay on Top 40 radio, and the album's evocative ambience made it a surprise hit, and not just with guitar enthusiasts. 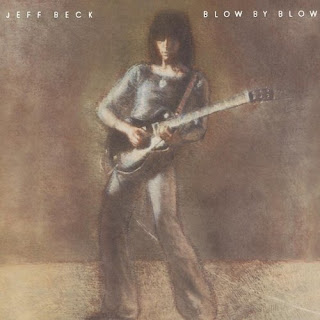 Beck would team up with keyboard player Jan Hammer to further explore the potential of jazz-rock and fusion for the next few albums and almost incessant touring. But it was just like old times in 1984 when Beck played on and appeared in the video for the Rod Stewart single Infatuation.

This might have convinced him he could tolerate having a vocalist in the band again because his 1985 release, Flash, saw him once more showing that he is a master of a range of styles. Closing off a five-year period without an album release, this unashamed rock album demonstrated Beck's playing was still cutting edge, easily matching the innovative quality of such latter-day luminaries as Eddie Van Halen and Michael Schenker. 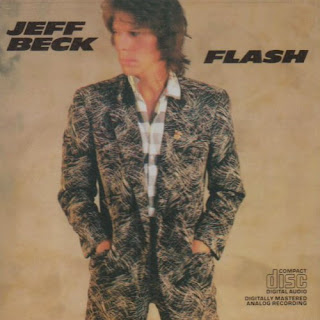 This was Beck at his very best: beautiful, soulful blues on the hit single People Get Ready, with Rod Stewart on vocals; and a powerfully modern rock approach infusing songs like Ambitious and It Gets Us All In The End. Beck was back. And the homecoming was spectacular, but ultimately short-lived.

Make sure you watch this clip. It's sensational. Funny too.

There would be no follow up to Flash as Beck experimented with industrial music and returned to jazz-rock and fusion over the next few years. And that's why I was apprehensive about the concert: my favourite Jeff Beck stuff was from the Yardbirds; the first Jeff Beck Group; and Flash.

So, would he be playing a complete career retrospective, or just what he's up to right now, another of his many progressions?

'soulful blues' ... People get Ready ... Rod The Mod: he might look stupid in that old photo but ya can't beat The Voice.
I particularly love his 'This Ol Heart Of Mine'.
Loved the Yardbirds 'For Your Love' when it came out. I can't imagine it sounding as good for younger people who don't get it in context.
Have you seen the Boat That Rocked yet?

The Zombies 'She's Not There' should have been it in to make it perfect.

That was an interesting little flood that came through today. Non gender specific TLOML is my favourite acronym.

Yes Andrew - 'the flood' lapped my Feed bin also.
It is after all, 'Lad Litter'.

AOD:
re For Your Love - I know some younger people who love its unique, timeless sound. The Boat That Rocked is still on the list. And She's Not There is another classic.

Andrew:
Yes, the flood. No doubt it tripped tsunami early warning systems everywhere. But I needed to do Beck justice. He deserves some explanation as he doesn't have quite the recognition factor most of his contemporaries do.

AOD:
Lad Litter: bringing you rubbish since 2007. Should be charging council rates.

Ed:
thanks - it's a long wind-up to the actual concert, I know. Context crucial though.

Awesome, now i have 'for your love' in my head. has cheered my day immensely!

With just the occasional tangent, read about Beck here.

Yes Tony, Blow Up was a crap* movie, but we went to see it when it came out precisely because of the peripheral cast like Beck, and Veruschka and Jane Birkin.
Of course the Vanessa nudity was a big drawcard for the uninformed, in those olden days of cinema.
There are some great Muso appearances in movies - Charles Mingus in an old thing on ABC2 at midnight just slayed me, and if you make a list, don't leave out Merla Haggard and The Strangers in Bronco Billy.
*Antonioni's Zabriskie Point was also crap.

EB:
For Your Love was an igniter for me - and proves the Yardbirds were a great band, not just a staging post for guitar heroes.

Tony:
Spinal Tap's Nigel Tufnell certainly looked like Beck, but they were an amalgam - Sabbath; Zeppelin; Purple; Quo. And the flashbacks show them following the British invasion script: r & b then psychedelia. And I still have a soft spot for Blow Up.

FG Marshall Stacks:
Was there ever a really good Antonioni film? I doubt it.

Also big props and thanks for starting commenting in the blogosphere again LL. Appreciate your comments the other day man.

Oh, and the music blogs might be the direction to head in if you ever turn your blog back over to the public. They are really well put together.