Tilting At Windmills? Let's Hope Not

You might have seen the article in this morning’s Age by now. It’s about a group called unChain St Kilda trying to prevent the destruction of the Palais Theatre in a proposed redevelopment of the St Kilda Triangle. 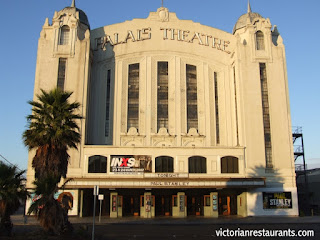 The hook for the article is the $5000 pledged to the preservation of the Palais by the Rolling Stones and Bruce Springsteen and verified by spokesmen from Sony BMG and Paul Dainty respectively.

I’ve only seen two concerts at the Palais: Joe Cocker in 1977 and Rory Gallagher in 1980. Both were excellent concerts and I remember the comfort, atmosphere and sound quality at the venue as being pretty high. Certainly higher than Festival Hall or the Tennis Centre.

You’d reckon a decent developer would be able to come up with something to include the Palais, wouldn’t you? Not so Citta Properties, a Sydney-based firm. Let’s hope the unChain group are successful in their efforts.

Actor Rachel Griffiths and artist Mirka Mora, among others, have also lent their support to the group. I don’t know Mirka at all, but my family does have a somewhat tenuous connection to her.

We’d been invited to visit my dad’s uncle out in Nth Balwyn. I must have been about three and a bit because I can remember my younger brother being a baby. Uncle Jack was pretty well-to-do. He’d made a decent living running black coal mines near Wonthaggi but was in his 60s and retired by this time. He might even have been one of the bad guys in Richard Lowenstein’s film Strikebound (1984), which depicts a long and bitter industrial dispute in the mines. I’ve got some research to do, I know.

But as we entered Uncle Jack’s house, the first thing we saw was a painting on his lounge room wall. It was of a rooftop landscape, crowded with attic-style windows. Uncle Jack had only recently purchased it and wasn’t too impressed.

My older brother saw it differently and said so. He thought it was pretty good. The rest of the visit passed pleasantly as I remember it. I spent most of the afternoon in the backyard having a conversation with Uncle Jack’s cockatoo. And it worked. I spent the next few days saying "Hello Cocky" and little else.

About a week later, we were surprised by a delivery. Uncle Jack had shipped the painting over to my older brother as a gift. These days, it’d be what you might call a win-win situation.

My brother told me later it was called The Tenements of Paris, and had been painted by Mirka Mora in 1957. Mirka ’57 was her signature at the bottom of the painting. I’ve been unable to find any reference to the work under that title on the web.

The painting hung in his room and the family lounge room for many years. About five years ago, I saw a copy of Mirka’s autobiography in the local library. No mention of the painting, so it’s safe to assume it wasn’t a long-lost masterwork.

I mentioned it to my brother and asked of the painting, but he’d been short of cash about five or six years previously and had sold it to William Mora’s Gallery. I was a bit saddened to think that a painting by such a prominent artist was no longer in the family. But it seemed to have gone to the right place.
Posted by Lad Litter at 17:12

Pity, but art trading goes on. I would love to see at least a picture of it. Why not contact the gallery and find out where it is?

Andrew:
Yes, I should do a bit to track it down. I'd love an image of it on my blog too, but no luck so far.

P.S have a great new years!

Hello I just entered before I have to leave to the airport, it's been very nice to meet you, if you want here is the site I told you about where I type some stuff and make good money (I work from home): here it is

Your Uncle Jack sounds like he is worth a book?
In 1957 the moras would not have been millionaire's and Uncle Jack's art patronage would have meant a lot to them.
(I know how rich people get rich, as I am still waiting for the promised TIPs from my waitressing at the Tolarno in 1968)
I wish I had $5000 to donate to The Palais cause.
I saw The Stones there with Roy Orbison and still have my ticket.
Orbison must have supported the Stones because I clearly recall the Roy Orbison Fan Club
(scary chicks with big beehive hair)
all standing and flouncing OUT when The Stones came on.

Ann: You're the one who'd be worth a book, for God's sake. Your probably just too damn modest! Your Roy Orbison description sounds right: the '65 tour was with Roy Orbison. Wow! You were there! Tell me all about it!

well there was a 6pm show and an 8pm show and me an my girlfriend christine had tix for both.
In between shows we sat in the gutter by the palais and screamed ourselves silly.
no change in past 40 years either.

Wow! All I can respond with is: the Stones 1995 MCG concert; and three Mick Taylor gigs. My folks wouldn't let 13 year old Lad Litter go to Kooyong in 1973.