Go over to Honey Smack to view the image she has on her PC desktop. It's a lovely shot of her and her daughter.

My desktop image is below. It's an image of the covers of all of the Rolling Stones albums released between 1964 and 1981. I've had this as my desktop image since about 1999. 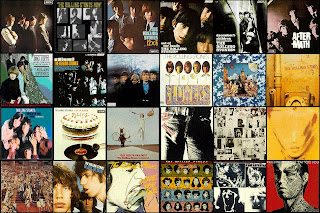 When a colleague saw it she said "Wow!"
"Hmm, another Stones fan," I thought immediately. "Yeah, I downloaded the album covers from Amazon, pasted them into MS-Paint and then re-pasted the lot into MS-Photo Editor to convert to a jpeg and there it is," beaming proudly.
"Now there's a bloke with a lot of time on his hands".
But thank heavens for memes. I've got about five major posts in various stages of development waiting to be finalized. Waiting for me to get off my bum and finish them, I mean. So I don't mind memes. They provide a quick and painless no-post remedy. Besides, I like variations on a theme and other bloggers viewpoints on the same topic always make interesting reading.
Posted by Lad Litter at 20:54

Holy crap that's some desktop image! You know, you should get that printed on t-shirts or something. I reckon a few people would pay money for them, eh?

Third from the right, bottom. I had that one. Was it Miss You? I think I got a dollar for it in the highriser dispose of vinyl day. The one above the one I had looks interesting. Was that Sticky Fingers? (and I think as a teen, I may very well had sticky fingers after seeing that)

My desktop image is not really suitable for public display at all.

All I shall is, she is smiling.

MS:
And warm seasons' greetings to you too. The Stones are very protective of copywrite, though. They even launched action against an American newspaper columnist some years ago because his name was Bill Wyman!

Andrew:
Miss You (1978) was their answer to the punk-reggae boom. Sticky Fingers' (1971) cover included a working zipper that opened to reveal a man in cotton briefs (rubber stamped "THIS PHOTOGRAPH MAY NOT BE-ETC.") - was conceived and photographed by Andy Warhol, designed by Craig Braun and featured the lower torso of either Warhol assistant Jed Johnson[1] or Joe Dallesandro[2] (not Mick Jagger as a number of fans at the time speculated) in a pair of tight jeans."

CBI:
I hope Elizabeth II appreciates being on your PC desktop.

Fantastic.
Let It Bleed is my favourite Stones album.

Do you have the album 'Flashpoint'? I LOVED that album/CD but it got pinched when our house got broken into years ago and I have not seen this album ANYWHERE since. Do you know the reason for this?

BWCA:
No hit singles on Let It Bleed either. Has a great atmosphere.

Blakkat:
I don't have Flashpoint but it's available at Amazon for as little as five bucks. Try http://www.amazon.com/s/ref=nb_ss_gw/102-9254096-2359307?url=search-alias%3Dpopular&field-keywords=Flashpoint+Rolling+Stones

Reviews on the site rate it highly so thanks for the tip, I'll snap it up.