That Pointy State Up There 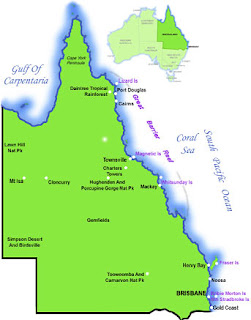 We spent ten days on Queensland’s Gold Coast in September. It was our second time as a family. Both times we stayed in the same place and did pretty much the same things. And yes, we are aware it’s going to take us a while to run the gamut of Lonely Planet Guidebook locations at this rate.

But when you’re on a good thing, and if it aint broke, cos better the devil you know, and when you’re too fucking lazy to take a risk on somewhere different in case it’s not as good as the last place you went to. Well, you don’t want to spend the whole fucking holiday whinging, do you? It’s not a travel philosophy that many would subscribe to, but it gets me by…

The balcony of our two-bedroom unit at Elanora overlooked a wide canal, where fish made splashing noises after dark. And we also saw a stingray and what must have been a bull shark judging by the fin and the wake late one night. Neighbours told us they’d seen the occasional dolphin too.

So we were in a good spot. There was a hire car included and the location was just too damn convenient. We did pretty much the same things as we did in March 2006, hitting the Worlds one after the other, and then a rest day to watch Geelong thrash Port Adelaide in the AFL Grand Final. I liked the watery worlds better, as for some reason I’m not scared of water slides. But you won’t get me near anything faster than a 1963 Volkswagen on dry land.

We actually went to Wet and Wild twice, so keen were we.

While waiting to go on the Tornado there, I saw something delightful: two very attractive young women were waiting in the ride’s spiral queue. Now, ninety-nine percent of blokes would have put both of them on their Myer Gift Registry. Tall, voluptuous, one blonde, one brunette, I’d noticed them turning heads all over the theme park during the early afternoon.

They got to the front of the line and were met by the attendant who told them that the Tornado was a four-person raft ride and that they would need two more crew. The attendant called out “Is there anyone in a pair who’d like to join up with these two?” Four young fellows were waiting further back and two of them started climbing over railings even before the attendant had finished. “It’s the least we could do,” one of them said as he clambered past me. The girls looked only half-pleased to be helped out. Quite a few people in the line got the giggles.

The young fellows looked like they thought they were on a date. The girls’ body language made it clear that it wasn’t. I hope there was a happy ending for all concerned.

At SeaWorld, Larry snorkeled in the big tank, among reef sharks and even a small hammerhead. I got a bit of a shock when I saw that critter swim past, I can tell you. Um, aren’t they dangerous? 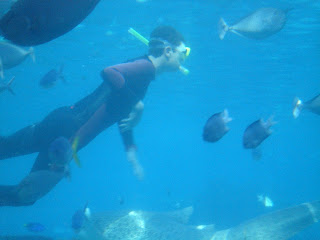 Curly wanted to go in too but we were a bit apprehensive as his swimming and breathing is not quite strong enough just yet. Being nine years old, he just missed the ten-years-or-older cut off. Moe knows his limitations and watched from below.

One thing we did differently was visit O’Reilly’s Rainforest Retreat in the Lamington National Park. It was a sinuous two hour drive up into the mountains followed by a walk along an elevated boardwalk above the rainforest. Just beautiful.

I hadn’t made the connection, but when we got there, there was a lot of information about Bernard O’Reilly’s rescue of the Stinson survivors in 1937. This is the famous story where a twin-engined Stinson passenger aircraft went missing on a flight between Brisbane and Sydney. The search, centreing around northern NewSouth Wales, had been abandoned when O’Reilly went out into the dense bush, convinced the plane had come down somewhere in the McPherson Ranges. About to turn around and head home, he noticed a brown tree against the normally green forest backdrop and knew he’d found the crash site. The two survivors were badly injured and O’Reilly helped organize local farmers in the difficult task of getting them out safely. 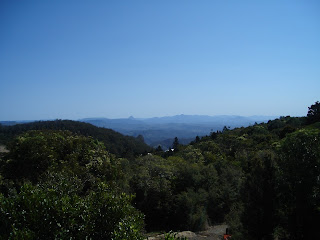 The view from the O’Reilly’s Guesthouse balcony

I would recommend this. We also went to South Stradbroke Island. On a day trip to a tired and rundown resort. I would not recommend this, but Curly and I did enjoy our 15 minute seaplane flight from there.

As we left Queensland the weather was closing in. We’d had ten days of sunshine sandwiched between rainy periods.

My only regret is getting taxis between home in Flemington and Tullamarine Airport at a cost of c. $105 when we could have driven there and parked in the long-term carpark for $67.

Boardwalks are great for people like me who like to view nature, but not be a part of it. We worked the taxi/carpark thing out a while ago. There is also a few Dodgy Bros car parking nearby who deliver you to the airport and meet you when you return.

The boardwalk in the National Park was the least Gold-Coasty thing we did and broke the holiday up nicely. Just like me to work out the economy of airport car parking as the taxi turned into our street! Like the Dodgy Bros reference too. Australia, You're Standing In It!

Oh my lord but O'Reilly's looks awesome! This post suddenly has me yearning heartily for a holiday.
For now I will just let the bird calls on their webpage soothe me. *sigh*

PS - I too like to revisit places, eg. around the Queensland/NSW border. You're not alone there.

EB: Yes, there are some places that just call you back. With the Gold Coast it was Moe; Larry; & Curly who really wanted to go again but I was happy to tag along.

Phish: Not bad at all. Might try out West next one. (Western Australia, not Western Sydney!)