We’d walked, two mates and I, from our cheap hotel on 49th St in mid-town Manhattan to Greenwich Village on a chilly Sunday in late December 1986. The thing about walking in Manhattan is that it’s probably the easiest way to get around the Big Apple, particularly for the wide-eyed tourist. And we could have passed for Marty Feldman.

Walking a distance in New York City is not a problem because the numbered streets ensure the journey is constantly punctuated and there’s plenty to see anyway. Yay, only 32 blocks to go. So we had a late lunch at a café-restaurant somewhere in the Village and made our way around to Washington Square. I was keen to go there just to see it. You’ve read the book, now see the park. 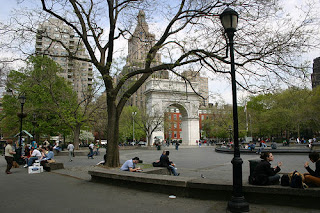 And it didn’t disappoint. Surrounded by old stately houses, dotted with bare winter trees, it had an urban oasis quality to it. And big enough for a range of activities to be going on: some organized; some spontaneous. The Square was populated without being crowded that day and had a really nice vibe to it. We sat on the edge of a fountain and watched the scenes around us. There were a lot of buskers and you could tune in and out of the music each one was playing just by turning your head: the guitar player doing note-perfect early Neil Young; the saxophonist playing The Odd Couple Theme with all of its variations.

But in American cities, we’d found that not all buskers are musicians. There was a small crowd gathered off to the side of us and a guy was holding court. The small crowd of people around him were having a nice old laugh so we went over. The fellow doing the act was a black man, probably in his late 30s. He had a claque of friends who laughed in all the right ways in all of the right places, and added to the show, like a well-primed sitcom audience.

The guy talked about the black experience through American history. And he was funny and poignant about it at the same time. I can’t remember too much of what he said but two things stay with me: the Statue of Liberty had just celebrated its centenary, but he said it meant only that she’d been sticking her torch up black peoples’ asses for a hundred years; and how sanitized, glossy and improbable the Roots TV mini-series’ treatment of the black experience had been. So how the fuck had it managed to make white folks feel so right-on about having watched it?

He engaged with everyone around him in a pretty inclusive way and the feeling was not of having been in an audience, but rather as part of a conversation. And you never got the “Oh shit I hope he doesn’t pick on me,” feeling like with many stand-up comedians. His claque interjected funny lines, engaged with the punters in the crowd and tossed lines out to the punters as well.

He finished up and we put some bills in his hat and went on our way. I didn’t catch his name.

Whenever we talked about that trip in the years since, that black guy always got a mention. How funny he was. And how polished American buskers were, because we saw other very funny acts on beaches and streets in various other American cities too.

So I got a sense of déjà vu when I tuned into The TV show The Panel for the first time, not long after its debut. There was a black American comedian guesting. And he was funny. He looked a little familiar too. More drawling and laconic now, and even more self-effacing. I got on the phone to one of the blokes who had been there in Washington Square that day. He’d watched it too and he was as sure as I was that this Franklin Ajaye was the guy who’d busked Washington Square. 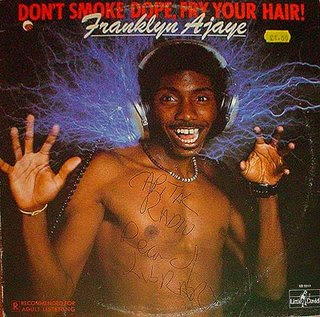 I hoped his television appearance meant that he was successful, and didn’t see or hear of him again for some years.

The next time, I was watching Deadwood on DVD. Now, if I was doing a series of posts on Awesome TV, Deadwood would get a guernsey (would be included, for those unfamiliar with Australian football metaphors). Deadwood is a dirty, vicious, profane western series that draws on such cinematic forebears as Unforgiven; McCabe & Mrs Miller; and The Wild Bunch. Terminal westerns about the end of both the West and The Western.

Franklin Ajaye appeared in the second season, playing the Nigger General, a Civil War veteran who drifted into the North Dakota frontier town and took up residence in the local livery stable. And he was pretty good.

I haven’t seen Ajaye at all since then but I hope his lively character role in Deadwood is an indicator that he’s been successful, and hope to see him in more good quality films and TV shows. And if I ever get back to Washington Square, I’ll look out for him there too. Even though I understand he now lives in Melbourne. Best damn busker I ever saw.

I have learnt the hard way that pasting from word does not work so well with blogspot.

Interesting tale. It is nice to have seen someone or know them before they become very successful.

You would recommend NY then, even in winter?

Oh LL, I love NY and it's stories. Probably more than is healthy for my wallet. You've inspired me to post a few NY pictures when I next get a minute.

Andrew, if LL doesn't recommend NY in winter, I will. I've been there in a few different seasons and winter is my favourite. It's cold, evocative and less crowded with tourists.

Andrew:
After all that, I hope it WAS Franklin Ajaye! I've been to NYC twice, Dec-Jan 86-87 (winter) and Apr 91 (spring) It's worth it no matter what the time of year, but go prepared. It's not the friendliest city I've visited.

BC:
How about the way every Manhattan street looks straight out of the cinema? I probably won't get there again, but you never know.

That was a really great description of the square. I feel that way when I visit Darling Harbour in Sydney. So relaxed, so peaceful, so busy at the same time.

How freaky! I've never been to the US but I'd love to.

Steph: I've been twice, once wih a couple of mates in the mid-80s and then again in the early 90s when I won a trip on a TV quiz show. The second time, we flew first class. Easy-peasy.

Phish: When I returned there a few years later it was spring and Washington Square was full of trees in bloom and even more people. A pleasant, friendly oasis in a city not not normally so approachable.