Brushes With Fame I: Shane Warne 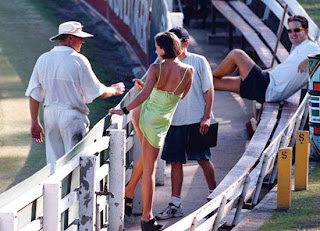 Our beach holiday over a recent Cup Day weekend got off to a late start. TLOML did all of the preparation while I was the useless drone that I usually am. So we didn’t get away until around midday and needed to stop off for a much-needed lunch on the way.

There we were sitting in the Elsternwick McDonalds. I had started my meal and so had lost contact with the outside world when I dimly heard Larry say “Gee that bloke over there looks like Shane Warne”.

I looked over expecting to see a nondescript chubby blond with a leering demeanour and a terminal hangover but blow me down it was him. He was with two little girls, so I took it to be an access visit. Aaron Hamill, the St Kilda footballer was with them too.

Anyway, Curly goes out to the playground and not long after, Shane takes the two girls out too. Seen through the window, Curly approaches Shane, words are exchanged, hands are shaken, then a few more words. Curly comes back inside and we head off to the beach.

In the car, Curly waited until we’d ALL breathlessly badgered him about what had been said and then reported the exchange thus:

Of such moments are lifetime memories made. Curly will be boring the daylights out of his little Curly descendants with ad infinitum retellings of this encounter long after my funeral barge has floated down the Nile.

*Thanks to www.boreme.com for the image.
Posted by Lad Litter at 12:56

St.Maccas - the patron saint of access dads of the world.

good story, and i am pleased to know he was nice to Curly

Thanks GoAwayPlease: Maccas are also the one that shuts kids up, then hypes them up.