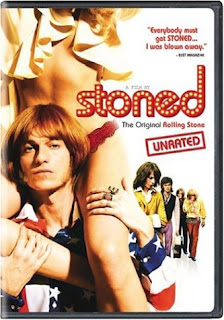 I’m the kind of trainspotting Rolling Stones aficionado who really wanted to believe all of those 1994 rumours about Mick Taylor rejoining the Stones and Ronnie Wood switching to bass when Bill Wyman departed. I would have considered that the happiest of happy endings. Yep, I'm a fan, no two ways about it. That said, I’m not entirely uncritical when it comes to their output and I’m eternally grateful that the only time I saw them live, at their second Melbourne Cricket Ground concert in 1995, it was on a “good” night. 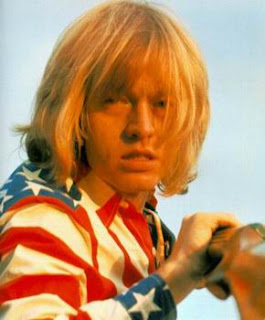 So I’m inclined to the view that the whole Brian Jones issue is likely to be one of those six-of-one and half-a-dozen-of-the-other situations when I think about who might have wronged whom among the Stones themselves: that Jones was equal parts perpetrator and victim in his demise within the Rolling Stones. But it really is a fascinating (and amongst fans, controversial) part of their rich history, and one that I was absolutely thrilled to learn was to be the subject of a biopic back in 2002. A biopic that would attempt to shed some light on how Jones might have come to drown in the swimming pool of his Cotchford Farm home on a hot July night in 1969.
The original title for Stephen Woolley’s Stoned (2005), was The Wyld and Wicked World of Brian Jones, and some packaging displays that as a sub-title, but the name recognition for the Golden Stone isn’t quite what it was in the 1960s, so the producers opted for a more obviously evocative play on words: Stoned. Woolley, who had produced the 1994 Hamburg-focused Beatles biopic Backbeat; as well as The Crying Game (1992) and Michael Collins (1996),  became the director of a film he only intended to produce when he couldn’t find anyone to step in. And from my point of view, all’s well that ends well when someone who really wanted to tell the absorbing story of such an intriguing individual finds himself in the director’s chair. 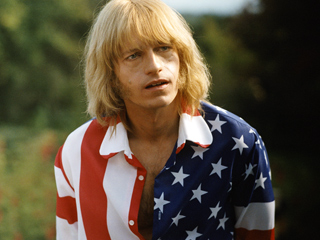 And the film constructs a compelling narrative: of Jones’ place in the Rolling Stones from his early leadership to eventual disenfranchisement; and the events surrounding his death. According to what is on the record about him, Brian Jones was very charismatic, but this was offset by a hefty dose of narcissism. So he was often an uber smart-arse who took delight in going out of his way to piss people off. The film captures this very nicely without overplaying it. While Jones is invariably described as sensitive, running through most of the anecdotes from people close to him is the perception that his sensitivity was limited to his own feelings and stopped well short of sensitivity to the feelings of others.

However, the major coup for the movie was to be Woolley's meticulous research: he tracked down and interviewed Janet Lawson, one of only four people known to be present when Jones drowned. The film's depiction of Jones' last night at Cotchford Farm is based largely on what she told Woolley. But it also matches up with the description Jones' girlfriend Anna Wohlin provided of the events of that night in her book.

Stoned isn't a masterpiece by any stretch, but there's a charm about it reminiscent of Blow Up (1966), in the way that cinematographer John Mathieson captures the ambience of the era. And you'll probably pick up that it's been influenced by such seminal movies as Sunset Boulevard (1950) in its treatment of an isolated, declining star whose world is closing in. And there's also a nod to The Servant (1964), which causes Stoned to treat Jones' eventual nemesis, the builder Frank Thorogood, as the working class brute who eventually assumes the ascendancy in the twisted household.

With that in mind, the film portrays the decadent rock star as a 60s version of the 19th Century English rake and as such, is more than a straight rock biopic.

Lead actor Leo Gregory comes close to looking the part and he manages to highlight the qualities Jones possessed that would bring about his downfall, while the actors playing the other Stones fit the mold in both appearance and mannerisms, without coming across as impressionists. It's also a really clever touch to have them subtly duplicate poses from contemporary films and photographs.

Monet Mazur plays Anita Pallenberg as the only "nice" character in the film, which goes against the more common anecdotage surrounding her character and demeanour. But this may well be Woolley sacrificing accuracy for dramatic effect, serving to heighten the audience's appreciation of Jones' sense of loss when she leaves him for Keith Richard. We're left in no doubt that Pallenberg is the deserving love of Jones' life. 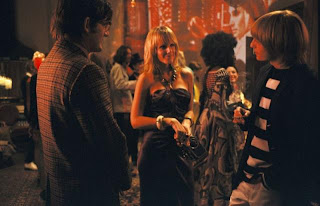 Paddy Considine as Frank Thorogood almost comes across as too much of an ordinary bloke to be the villain but that at least makes the film's take on the events surrounding Jones' death more understandable. Considine's is a multi-layered performance that shows how people seduced and belittled by the rich and famous sometimes bite back. The link between the two contrasting worlds of Jones and Thorogood is provided by David Morrissey, who gives Stones' Mr Fixit Tom Keylock just the right kind of understated menace, while David Walliams from Little Britain has a small part as a snooty Stones office apparatchik. 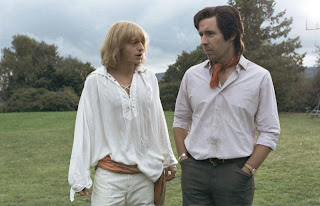 Woolley had little hope of getting permission to use actual Rolling Stones music on two counts: his budget was never going to allow the purchase of very expensive rights; and the Stones probably wouldn’t have come to the party anyway. The film doesn’t lose much by it, although it does prevent Stoned from exploring Jones’ significant musical contribution to the Stones' catalogue. All the same, there’s a scene of the early Stones c.1964 depicted at a gig performing Willie Dixon's Little Red Rooster, when things are starting to go very well for them, which sounds like an authentic rendering of their live sound from that era. 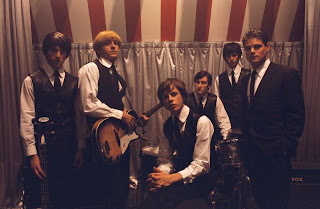 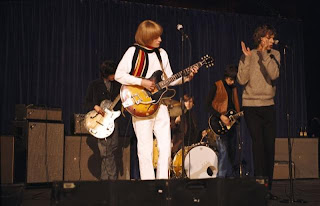 You'll probably appreciate the delightful attention to detail in the costuming - Roger Burton must have pored over a lot of images to accurately reproduce outfits Jones and his fellow Stones were photographed in at the time. 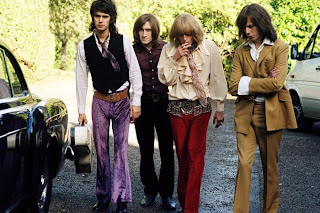 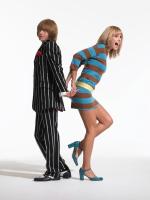 And there’s also an illuminating interview on the DVD extras with the movie’s hair stylist, Elizabeth Yianni-Georgiou, (alas, not included on my copy) where she explains that it would have been much more accurate to use wigs, but again budget considerations were prohibitive so she just had to do the best she could with actors whose hair type was a lot different from the people they were portraying. 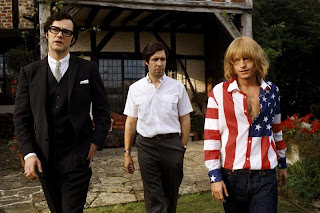 There are some telling lines in the film too, such as when Jones and Pallenberg first meet after escaping a chaotic 1966 concert together.
“Hi, I’m Brian.”
“But everyone knows who you are.”

At that time, everyone really did know who Brian Jones was, but these days of course, hardly anyone does.

And when Jagger and Richard terminate Jones' tenure in the band, Keith's phrasing is identical to what he said of the occasion in an interview on the documentary 25 X 5:
"You're out, cock. You're fired."

But it's the film's final lines, when Jones' ghost appears to Tom Keylock, that serve to sum up Jones' diffident, fatalistic persona:
Keylock: "You just had to go and screw it up, didn't you? Your problem is, you were never happy."
Jones: “You're wrong you know Tom. I was happy. Somewhere in the middle there. The thing with happiness was... it was boring. 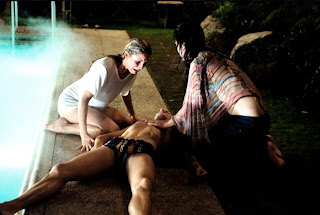 oh Brian Brian Brian. so sad.
We have missed the brilliance he didn't get around to, simply because he never got treatment for the brain disorder that was obviously present.
Lithium might have changed everything.
Dudley Moore, another musical genius was also an emotional monster (to 4 wives and his pal Peter Cook,) and at the very end when all had abandoned him, the brain disease was discovered.
Cotchford farm has been for sale about a year if you have £2,000,000.

Thanks Ann ODyne - i take your point about lithium. Maybe, just maybe...

See if you can get a look at Stoned if you haven't done so already - it's well worth a look.