Over at The Rising Storm, Len Liechti compared the varied track listing of the two versions (UK & US) of the Rolling Stones' 1966 Aftermath album and concluded that "it’s always fun, if ultimately pointless, trying retrospectively to construct the perfect album by arguing what should have been added or left off".

Pointless fun? Sounds like a great idea. Let's do it.


But pardon me if what I'm about to say appears sacrilegious. This series of posts is just a matter of having a look at a few notable albums and how they might have differed via the addition of contemporaneous singles. Some would have been enhanced, others would have been left with their status unchanged. And in one case, a less-than-ideal album just might have gone from self-indulgent failure to near-classic.

The Beatles:
Rubber Soul - Day Tripper; We Can Work It Out; 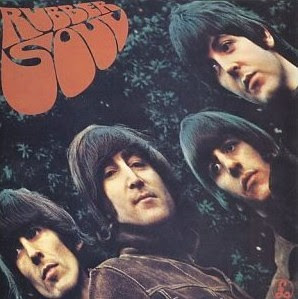 Rubber Soul has long been regarded as a fine album. It is often cited as the first album that was more than just a collection of songs. And Rolling Stone put it at Number 5, if you don't mind, on its list of the 500 Greatest Albums of All Time. So I'm not saying it's deficient in any way, just that it could have been even better.

The opening track, Paul McCartney's Drive My Car, has a contemporary feel even today with its sinewy guitar lines and urgent vocals. Three of the most poignant ballads you'll ever hear in Norwegian Wood; Michelle; and Girl are interspersed throughout the track listing. It's a litany of great Beatles' songs and you could imagine the four songs already mentioned plus probably I'm Looking Through You; In My Life; and Wait all being hit singles instead of album tracks.

There was a lot of experimentation on Rubber Soul by contemporary standards. Backwards guitar solos, the sitar on Norwegian Wood, pianos sped up to sound like harpsichords, and clear influences from India to the US West Coast. The overwhelming majority of it sounded good, which is not always the case with experimentation. There would be a lot more of this on the next two albums from the fab four, Revolver and Sgt Pepper's Lonely Hearts Club Band but Rubber Soul laid the bedrock for it.


And if you were listening to this on its first release, you might have pondered for a moment why the almost simultaneous December 1965 double-A side single release Day Tripper and We Can Work It Out didn't make it onto the album. But back in 1965, it's likely you would have bought the single anyway. 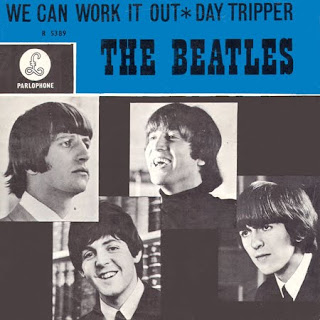 Day Tripper opens with one of the most recognizable guitar riffs in rock music and is a beautifully structured song. It's mainly a John Lennon-composed song, but one where Paul McCartney contributed the verses and sings lead vocal during the verse. Essentially a 12-bar, the Beatles had to do something to make their contribution to that form stand out. They do it by transferring the riff to the much-higher sub-dominant for a BIG key-change. This is held in a jam-like middle-8 while the vocals and guitars ascend to a crescendo that leads very deftly back to the riff.

McCartney's singing is a pure throat-shredding scream (lots of luck nailing that one, cover bands) and as with their very best songs, all vocalists can be heard distinctly through the harmonizing. This was one of those great times when a huge hit was also a seminal moment in rock history.


We Can Work It Out shifts in and out of 4/4 and 3/4 time, and sounds quaint with John Lennon's harmonium being a distinctive feature of the song. Like Day Tripper, this is another rare collaboration, with verses by McCartney and a chorus and middle-8 by John Lennon. The vocals are earnest and convincing, and switch back and forth between optimisim and pessimism. The Beatles had argued over which of the two songs on the single should be the A-side and so this record became the first-ever double A-side. However, it was We Can Work It Out which proved the more popular in airplay.

So Which Tracks Would Miss Out?
On an album with 14 tracks? None, not even the Ringo song, What Goes On. And the length of the album would stay under the LP limit of 45 min, with two great additions to the track listing.
Posted by Lad Litter at 18:17

I bought my copy of Aftermath from Ultra TV & Sound in Carlisle St Balaclava where I worked in the Commonwealth Bank.
It was 52/6 or $5.25 and my weekly wage was about $24

At the same time, I bought Levis jeans and they were 52/6 as well.
Funny how the cost of each has diverged since then, not to mention that the price of concert tickets (Stones) was about 10% of that amount at that time.

1966 was one hell of a music year - just look at the Cashbox chart even allowing for it's mainstreamishness (eg Dylan not there as much as one would think he should be).
Rock ON.

I would certainly replace Song is Over with Pure and Easy on Who's Next.

oh for godssakes it's called 'Wonderful Today' which I clearly am not, despite not ever smoking the truckload of dope that Eric & Pattie did.

Looking forwards to Keef's book due out soon. will pre-release order it from The Book depository in the UK.

Kath:
If you're not familiar with the album, you're in for a revelation when you do listen to it in its entirety.

AOD:
I think the Patty Boyd book is Wonderful Tonight, and it's on my Amazon wishlist. She looks great as one of the schoolgirl extras in A Hard Day's Night.

AGB:
A line from Pure and Easy is inserted into Song Is Over just before the fadeout, so there's some crossover with your view.

AOD:
Keith's book will need to be rigorously fact-checked, I'm afraid. He's been a bit fast and loose over the years.

That's an amazing top 100 chart with the exceptionally notable exception of no 1.

No wonder we used to listen to the radio so much.

"A line from Pure and Easy is inserted into Song Is Over just before the fadeout, so there's some crossover with your view."

Who's Next is what was left over from Pete's abandoned Lifehouse project.

Pure & Easy was going to be on Lifehouse, but in the end, and probably because Pete was struggling to put Lifehouse together (and led to his collapse), he settled for Song is Over.

An unfortunate decision. In my opinion Pure & Easy is The Who's best song.

This is the version of Pure and Easy that was going to be on Lifehouse:

It is not as good as the slowed version on Odds & Sods:

Phil:
Look, I have no problem with Rolling Stone or anyone coming up with a list, even if I don't agree with a lot of it. It challenges my views so Ill be inclined to go back and re-evaluate some of those albums. Thus expanding my mind. And contracting my wallet.

Tony:
You've probably got the DVD of Who's Next from the classic albums series. Most interviewes concluded that Lifehouse was unintelligible to everyone except Pete and what wasleft wasjust 10 great songs. Thanks for the link. I only knew the odds and sods version of Pure and Easy.