Lad Litter and I

Would it be presumptuous to apologise? For the nearly two months spent without a post here? Yes, I think it would, but I'm going to anyway. I'm going to assume that you, y'know, like me as a friend. 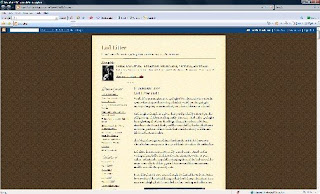 And alright, taking it as a given that you'd probably rather I put the odd piece up a little more frequently, I'm sorry. And I also apologise for neglecting all of your fine blogs. Okay, I have been a bit busy elsewhere. But I don't think you'll be consoled by the fact that there are seven posts saved into drafts that consist entirely of titles and labels and not much else.

This blog is having something of an identity crisis. It's become a whole lot less anonymous than you'd think. Or rather, it's author has.

Lad Litter is a construct. No, really. Based on me. Based on the writing of people like Nick Hornby. An attempt to write, or post rather, in an approximation of that style commonly known as "lad lit". Hopefully, stopping short of the bad case of the cutes some efforts of this type in literature and the cinema seem unable to avoid. But probably not.

Everything here is true to me, though. No factual inventions. Just a few minor rewrites of the actual dialogue that don't change the intent. It's a construct alright, but it's one I feel is of my own making and reflects me. 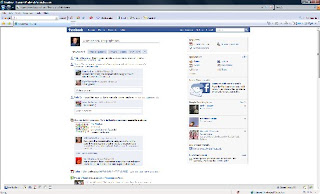 And I think it's at the very least remarkable that my Facebook page, by comparison, looks and feels like more of an invention than what you read here. There's a kind of high school hierarchy about Facebook that I don't think is terribly evident across the blogosphere. And wouldn't you know it? Everyone seems so much cooler than I am.

I'd completely forgotten what a fucking nightmare being a teenager was. Facebook brings a bit of it back. And I feel a little uncomfortable about it.

So I'm wondering if it was a mistake to get into it. Okay, maybe not. You can ignore the popularity contest aspect of it and just do what you want to do. And don't do what you don't want to do.

But I used the Friend Finder and became Facebook friends with a couple of bloggers. And it's unexpectedly a little discomfiting. No reflection on these bloggers. They seem pretty self-assured and comfortable with who they are both in and out of the blogosphere. And with good reason too. But to be combining Lad Litter with my Facebook persona (because that's what it is, a construct or a perception, only using real, or realistic, names and details) just feels a bit funny.

I think what's happened is, Lad Litter and I have collided, like a future self meeting up with a past self in a really good time travel scenario. Or that Simpsons episode where Bart and the other kids go to Shelbyville and come across their equivalents. Okay, probably not nearly as exciting, interesting or amusing but, you know what I mean.

So there are two issues with this: oh, and it's not a fucking identity crisis, by the way. I do exaggerate.

No, there are two issues here: the nature of Facebook and the persona you create there; and Lad Litter getting mixed up in it.

Should be worth another draft post. First the title....there. Now a label. That should be okay. Whew! I'm knackered. But I think I might be onto something. Yeah. I'll come back to this soon....

Completely with you about teenage years being a fucking nightmare.

Might be one of the reasons I don't have a crackbook page.

In terms of the constructed nature of identities, in many ways one (say online identity) is no less real than another. It just happens to be mediated through a particular electronic form.

For someone who blogs under my real name, I still view what is represented in my blog as a imagined, fictitious in many ways, constructed, perhaps even idealized, identity.

Welcome to a metaphysical crisis.

Hope you are otherwise well.

Thanks Edward. I am indeed otherwise well and think you're right about the idealized identity. The dilemma might be not seeming to have enough control over the extent of idealization of my facebook self. Might even be a case of liking Lad Litter a whole lot better than the real me. Metaphysical crisis for sure!

shit man my farcebook ID isnt idealised. fk em.
BUT there is no way I want it connected to my blogs.
You haven't sent me a Friend Request ya bastard.

Well I don't know if it will make you feel more comfortable, happy or
something, but I was really pleased that you went to the trouble to find my Farcebook profile. Personally, I'm almost at the point of cancelling my FB profile. And I would if it wasn't a really convenient way to stay in touch with approximately 10-20% of the people who are listed as my friends. But also consider this, the younger you are, the more likely you are to have more 'friends' by virtue of the fact that more people in your age range are internet users, or more specifically facebook whores.

I think I've also said this to you before, I'm quite happy for fellow bloggers to know who I am in 'real life', but I would be reluctant to share this blog with certain people (particularly work colleagues) in my 'real life'. I guess the reasons for that are obvious, but it's also telling where the real honesty about yourself lies.

AOD:
Tried to find you on FB, at first like Orpheus pursuing his lost Eurydice but I think you must have restricted your appearance in searches so I gave up. You can't play hard to get with a bloke who's as easily discouraged as this lad.

Blakkat:
Awww, you really know how to hit the spot, don't you? I'd love to be able to provide the sort of reassurance to my friends that you have for me. Kind words. Your take on this identity issue is pretty interesting too in that you're allowing traffic to cross over, but only one way and justifiably so.

Because most of my real life friends aren't FB users, I've got mainly younger acquaintances, cricket teammates, some former colleagues and ex-students. And the Blakkat. Very glad to have you.

Hmm. I was a little worried when I started reading this post, thinking plaintively 'you mean I've been posting to a novel?'

But you reassured me by the end.

And something for you at mine. Again. Keep forgetting that part...

So kind and generous you are. I'll get over to your blog and see what the big surprise is tomorrow.