You can’t go past a guitar player who tries to do something a bit special with almost every note. You know the type. They’re said to play like it’s an attack on both the notes and the instrument. Think Jeff Beck and Jimi Hendrix. But I’m not so sure the metaphor fits. I think it’s more about an individual player’s feel. Intangible, I know, but what did you expect me to say? Je ne sais qua? 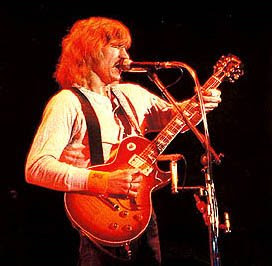 I’d first heard of Joe Walsh in early 1973 when his hit Rocky Mountain Way got airplay on 3XY. The talk-box was a strange new effect and his slide guitar playing was outstanding, with a delightfully dirty sound and plenty of sustain, artfully combining country and blues influences.

His album titles were witty (eg So What?; But Seriously, Folks; There Goes The Neighbourhood) and tracks from the live You Can’t Argue With A Sick Mind were regularly shown on rock clip TV shows like Flashez and WROK in the mid-70s. It was here that I was able to see Walsh in full flight. 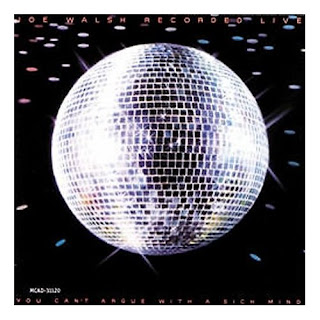 I mentioned that he’s the kind of player who puts everything into just about every note (by that I mean slight bends and the odd harmonic scream) but between notes he slid along the fretboard, going waow and whoo to punctuate his solos that really made my hair stand up on end. Here was a player who knew how to use the more “noisy” elements of rock guitar technique beautifully.

When I heard early in 1976 that he was to replace Bernie Leadon in the Eagles, I immediately thought their share price was raised considerably. No disrespect to Leadon, who was a fine singer-songwriter-guitarist, but up until Hotel California the Eagles had struck me as a group manipulating the easily-impressed (and easily depressed!) sensitive teenager market with contrived country-rock she-done-me-wrong songs. They still retained this element of their persona after Walsh joined, but it was just, I don’t know, better? And he and Don Felder really knew how to blend their similar styles. More fraternal guitar twins than identical. Kinda like Keith Richard and Ron Wood, but more accomplished. 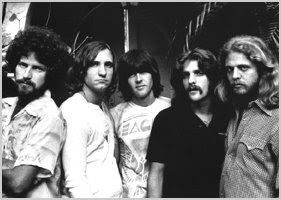 At Kew’s Prospect Hill Hotel in 1985, legendary journeyman guitarist Waddy Wachtel supplied the counterpoint that Felder had provided on the Eagles recordings. Wachtel could play too. This was a Joe Walsh solo gig, but this American band (he had toured with the Party Boys* earlier that year. I saw them at Billboard) were just a hot outfit. Don’t you just love an eminent artist who doesn’t feel the need to be the big shot on stage?

They did all of his classic songs, from the early James Gang days, his solo career, and the Eagles. One particular highlight was a pumped-up Life In The Fast Lane, not an easy song to do live and believe me I would have understood if they’d left that one off the set list.

But for this admitted worshipper, Neil Young’s Cinnamon Girl was the sour cream on the burrito. The original is the kick-ass opening song on Young’s 1968 Everybody Knows This Is Nowhere album, but Walsh and his hired guns took it to a new level while still remaining faithful to the original.

It was a pretty blokey crowd of unashamed Joe Walsh fans that night as I recall and we were all just transfixed.

Isn’t it great when you see an admired artist perform and expectations are both matched and exceeded?

*The Party Boys were a band that served as a perpetual fun side-project for prominent Australian rock musicians and the occasional overseas guest artist. Their membership was fluid and if memory serves, at different times included: John Swann; Marc Hunter; Kevin Borich; David Briggs; Shirley Strachan; and many others.
Posted by Lad Litter at 09:02

Life's Been Good is on The Eagles Live and was about the only Eagles song I liked.

Joe's best albums were his two with Barnstorm: Barnstorm and The Smoker You Drink, The Player You Get.

The James Gang were grouse, but.

That was the original James Gang lineup you saw on Drew Carey, too and I'm sure Joe doesn't really drink his own urine. I just love the way the guy plays.

He's a funny fellow, that Joe Walsh. I love the faces he pulls when he plays.

I can't pretend to know half the names you mentioned, but I'm fully impressed with your knowledge on the subject of 70s guitarists & rockers. You're a Swiss bank of information on some many different topics, aren't you?

It's probably a baby-boomer thing but rock was pretty important in the scheme of things. And yes Blakkat, just name a topic and I can be guaranteed to bore the daylights out of you!

Waddy Wachtel was on a lot of those early 70's LA albums. God I loved Neil Young back then .. and all the Troubadors.

Fell off chair to see Borich mentioned for second time today, when nobody has mentioned him for 30 years.
He lives next door to a friend of my houseguest.

and Pavlov's Cat has posted a bloody CSN clip on her blog which gave me a start too.

I'd seen Waddy play on some mid-70s Linda Ronstadt clips and it was great to see him that night. No wonder Keith chose him to be on his solo albums.
Borich was (is) a fantastic player. A later Great Gigs instalment features the Kevin Borich Express.

You have excellent taste Sir.

And thanks for dropping by my place!