Classic TV I: Flight of the Conchords

Last Sunday, I read a fairly tepid review of Flight of the Conchords in the Sunday Age. Thinking it might be okay but not really expecting a cack-fest of any great magnitude, I tuned in about ten minutes into the first episode and laughed helplessly for the remainder.

Flight of the Conchords stars New Zealand musical-comedy duo Bret McKenzie and Jemaine Clement as a New Zealand folk duo trying to hit the big time in the Big Apple. They have an unbelievably incompetent manager, desperately sell possessions to a pawnbroker who doesn’t like them but who is still their best friend in New York, and a lone female fan who they find repulsive. 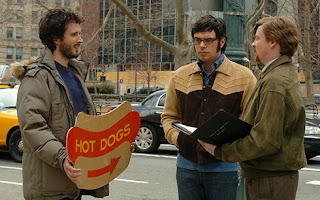 Inner monologues and dialogue between characters are often rendered in songs, frequently in the form of full-on music videos, a little bit like the Monkees TV show. There’re also many funny references to the Aussie-Kiwi dichotomy, which probably parallels the US-Canada relationship in some ways, I’d imagine. Read an interview with Bret McKenzie here.

Anyway, I’m about to watch episode two of this terrific 12 episode HBO series in just a few minutes. It screens on Channel 10 at 10:10pm. In Melbourne, anyway. Check local guides for details.

You can visit the official HBO website here; check out the BBC take on it here; and read a few slabs of dialogue here.

I found it piss-your-pants funny and littered with brilliant musical and visual gags.

So much of commercial TV is a complete fucking wasteland. And no, I’m not going to add the almost-obligatory “these days” to that assessment. Because let's face it, it’s ever been thus. But Flight of the Conchords is great TV, not just a cut above most of everything else that’s on at the moment.
Posted by Lad Litter at 21:50

And now too late for me to tape it. I heard about it though. Next week.

I had heard about the show but never knew the content. Off to go check it out. Thanks :)

NZ gave us Fred Dagg aka John St.Clarke The Divine.

"incompetent manager" and "repulsive fan" ... these guys have Walked The Walk.

Lost In Reverie, another Melbourne blogger I link to said
"Sunday - Flight of the Conchords! This is gentle humour with a lot of love between the boys, and Kristen Schaal is in it. Their accents always make me laugh, the songs are fabulous and clever, and the fish out of water jokes are never old. New Zealand...Rocks!!!"

and another Melbourne blogger I like
(virtual xenophobic old me)
Other Rants got the DVD for Christmas and loves it too.

Andrew:
Ep 2 not quite as funny as Ep 1. I think you'll like it though.

Meghan:
Thanks for dropping in. Should be worth a few laughs.

BWCA:
John Clarke, who appeared as an extra you couldn't fail to notice in the first Bazza McKenzie film. Another famous Australian who's really a New Zealander.

AOD:
Thanks for the blog links to like-minded bloggers. I'll check them out.

I've heard of the TV series and it did appear very well. The "oh no, we're not Australian" jokes were a little trite at times though.

I missed it, despite wanting to watch it. Shall have to follow andrew's lead and do so next week.

RVB:
Thanks for visiting. I think it's refreshing to hear the Aus-NZ situation from the NZ viewpoint. Learning that they see us as slick was an eye-opener!

Miss D:
You did but see me passing by....
Hopefully the laughs in the show stay consistent.

I think Kiwis are prob closer in sentiment to Aussies than Canadians to Americans.

Tv as bad over there as it is here these days?
41 channels and nothing on...

Most Australians I know (including family members) do not have very nice things to say about the Kiwis (and I don't get it). What I don't understand all the more is why the Kiwis (again, including family) really don't like the Aussies.

Canada is just that really big 51st state between Alaska and Washington! ;)

The way my family talks, it is more like a Mexico/US relationship - that of NZ to Australia???

Crushed:
Aus & NZ were nearly federated as one country back in the 1890s, I think. Aus commercial free-to-air TV is a desolate wasteland. No movies, just crap.

TE:
Some big brother-little brother antipathy. I believe we are very close, culturally. Too close to be considered along US-Mex lines but enough to provide this show with plenty of gags.

Totally agree with this review. Flight of the Concords is about the best TV on at the moment. Both funny and original. I've been wondering why Australian TV can't do any comedy shows that are as good as that, and the answer is not about money. Maybe about talent? More likely about original talent and ideas.

Also the 'lone female fan' is played by the amazing Kristen Schaal. Who gives a great performance of being enamored by the guys in the band in front of her husband!

Working Dog have a comedy in production at the moment about politicians. If it's as good as FrontLine, you beauty. Kristen Schaal is great and is featured more strongly in a couple of later episodes.