‘Cos You Know Sometimes Words Have Two Meanings...

This post concludes the teasy one from about three weeks back which alluded to an Interactive All-Male Review. And, I’m really sorry for this but you’re bound to be disappointed.

“Who was that you were on the phone with for the past 45 minutes?”
“Johnno, He just got back from Warrnambool.”
“Well, did you find out details of what went on when he was working at Crystal T’s in the mid-80s?”
“Yep. He filled in a few gaps. But he left a few too…”

Johnno is a lifelong mate who had a couple of itinerant years back then. He just picked up work wherever he could, usually through mates.

One particular mate got him a job at Crystal T’s, a legendary strip-joint in Brunswick. Crystal T’s was famous for its hen’s nights. Johnno was initially in charge of catching the stripper’s garments when they were thrown into the crowd. Caught in the midst of a few mad scrambles from the girls trying to collect a souvenir, he reckons it gave him a better appreciation of the type of pressure rugby players are under during a scrum. After proving himself in this highly specialized task, Johnno was then head-hunted into the role of making sure the manually operated spotlight found its mark.

So I asked Johnno to recall some of the more prurient aspects of his time working at Crystal T’s. You know, what a large group of women brought to fever-pitch by the occasion of a hen’s night, plenty to drink and the presence of scantily clad, buffed male strippers might get up to.

“Well, it was pretty hot stuff,” he told me. “There was one time when we were on the road, at the Traralgon or Morwell Town Hall, the chicks had to walk past where I was standing operating the spotlight to get to the toilet. Quite a few of them squeezed my bum. On the way there and back.”

“Alright. That’s pretty good. But weren’t there times when chicks were randomly sucking blokes off in the toilets, or flashing their tits at the strippers?”

“Oh, not really. Sometimes the strippers used to take excited girls back into the dressing rooms. But I never saw any of that.”

“Hm. So what happened that was, you know, hot?”

“Well, once there were these girls hanging around post-show and I ended up taking one back to my place, but that was about it.”

“You had sex though.”

“Shit. I sort of promised I’d be writing this up on my blog and so far, it’s just not really as exciting as I hinted it might be. My blog’s going to suffer some credibility issues if it’s not salacious enough.”

“Well, just make up some bullshit then. You ought to be okay at that from job interviews. Gild the fucking lily. Look, I suppose there were some fairly striking things about it though. For example, female crowds were a lot different from when the blokes were in.”

“Um, the women seemed to be there for a good time and to have a few laughs. They’d be cacking themselves at the strippers’ antics and at each other. Really getting into the fun side of things. Whereas the blokes would be much more serious. Really aroused and loud about it. Almost out of control, some of them. The hens’ nights were much better to work at because the women were pretty well-behaved really. The blokes would be a bit too much.”

“But there was a hierarchy there too. The strippers were like rock stars and we were the road crew. No self-respecting chick is going to be throwing herself at the road crew for chrissakes. And the female strippers would only have casual sex with male strippers. And they didn’t talk to us or acknowledge us very much at all.”

“Fuck. I’ve sort of indicated that there were some pretty raunchy goings on. And that’s all that happened?”

“Sorry, mate. Look, why don’t you write about all the times gay men have come onto you because they think you’re gay. And how you reckon you don’t send out signals. We’ve had a few lost-bladder-control cackfests reminiscing about that. Surely that’d be okay for a post.”

“Fucking shut up. I don’t need you to suggest blog subjects for me. Jesus, you worked in a strip joint and didn’t fucking see anything. And I don’t send out signals. There was just that one time in San Francisco in the mid-80’s when I had a moustache and happened to be wearing a turtle-necked sweater. That’s not sending out signals.”

“No, of course not. Sorry mate. One thing though. I can remember seeing a bloke in a suit, straight fair hair, glasses. Bit of a Pointdexter. A Mr Peabody lookalike. He might have been a bit younger then but, you don’t think it could have been….” 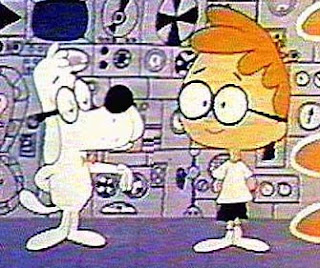 Labels: The Things You See...

Just a job eh. All in a day's work. Who would have thought that when you first mentioned strip club that within a couple of days, strip clubs would be all over the front page of our newspapers.

For a story that lacks the meaty (!) stuff, it's still pretty awesome to get a look behind the scenes - female strippers only get it on with male strippers eh .... there goes that fantasy.

I used to work with a woman who's boyfriend was a male stripper. He was a nice bloke. Worked at a postie during the day.

C'mon then! Where are the stories of the guys who think you're 'the man'? Even if you're not 'the man' or 'that man' but 'some other man who's not that way inclined notthattheresanythingwrongwiththat'...

Really, it's also coz being in a turtle-neck with a moe no self respecting woman would approach you (unless you're her pimp). *heh*

Andrew: I suspect my mate told me a few tall tales at the time as I hev vague recollections of him worrying his work might see him turned into a pillar of salt. I probably should have milked the Rudd link a bit more, no?

Mooiness: I think customers were still on the manu (sic) for the female strippers. But only the flashy, well-heeled punters.

Eleanor: That time in SF might be worth a post. It was pretty funny because I had no idea till much later that the chap was chatting me up.

I have a friend who's an "exotic dancer" and the way she describes it, it's the most boring job ever.

She gets some nasty bruises on her thighs due to sliding down the pole and lots of blisters on her feet due to dancing in seven inch stilettos.

A friend of mine has made a few recent journeys to Macau for some stripper action. Apparently they lit a fire around her chair, and put her legs around their shoulders. Nothing like that at Crystal T's?

I think they've renamed it recently - Crystal Showgirls or something like that. Perhaps you and your mate should take a trip down memory lane as a final in the series eh??

sounds like one of my favourite Sixties films
What's New Pussycat? -
Peter O'Toole is 'Michael', and Woody Allen is 'Victor'-

Michael: Did you find a job?
Victor: Yeah, I got something at the striptease.
I help the girls dress and undress.
Michael: Nice job.
Victor: Twenty francs a week.
Michael: Not very much.
Victor: It's all I can afford.

Hahahaha! Good movie reference BWCA! My experiences should be as funny as that movie.