There's a Rolling Stones farewell tour of sorts that's been going on for some two years now. It's huge, but there are differences between this and the typical large-scale tours they've mounted in the past. After decades of eschewing festivals, they played Glastonbury for the first time ever in 2013 as they criss-crossed the Atlantic, seemingly ad infinitum. And Australia's been included on the itinerary for the 2014 leg of the tour.

Ordinarily this kind of news wouldn't excite me all that much. I can't really justify the expense of going along to either of their upcoming shows at the acoustically abysmal Melbourne Tennis Centre or the outdoor concert scheduled for Hanging Rock. Maybe it's because I saw the Stones at the MCG in 1995 when they were enjoying something of a peak in live performance quality. But one of the aspects of this world tour that has generated a lot of interest is the quantity and range of guest artists making cameos with the Stones.

You see, the Stones don't have a huge history of that sort of thing, being more inclined to want the stage all to themselves. Certainly, the 2006 Shine A Light performances looked to be turning that around with guest appearances by Jack White, Buddy Guy, and Christina Aguilera. But for this tour, they've had former members Bill Wyman and Mick Taylor join them onstage and reinforced that with a host of contemporary artists and legendary performers to sit in with them. 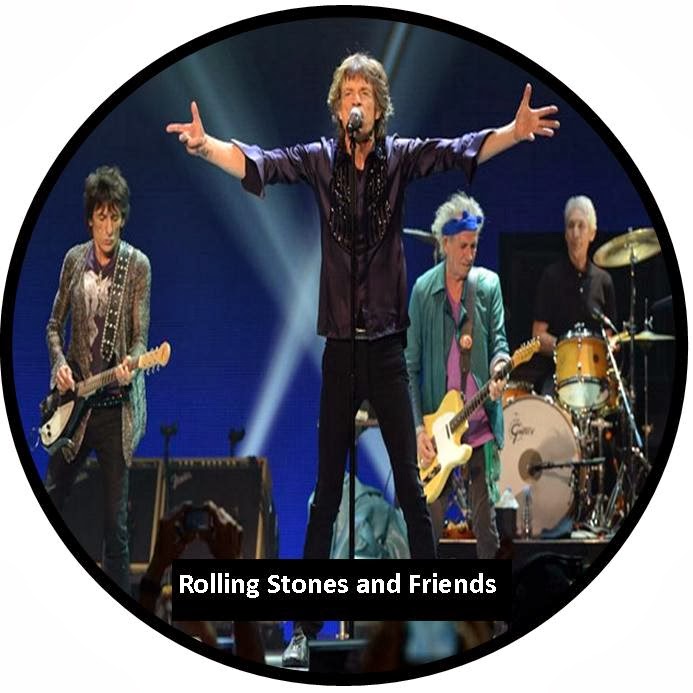 I think it's very generous of the Stones to include Wyman and Taylor like that. Both have their own very appreciative fan subsets, particularly Taylor, so it's a warm and inclusive thing to do. The hooking up with contemporary artists could be viewed cynically I suppose, but from my point of view the potential to add something interesting to the Rolling Stones canon overrides any such concerns.

All that said, I wondered if putting several of those disparate elements together would make an engaging bootleg and went off to youtube and then that handy mp3 conversion website to see if I could come up with something.

This is how things turned out. Song title links are to the youtube clips. 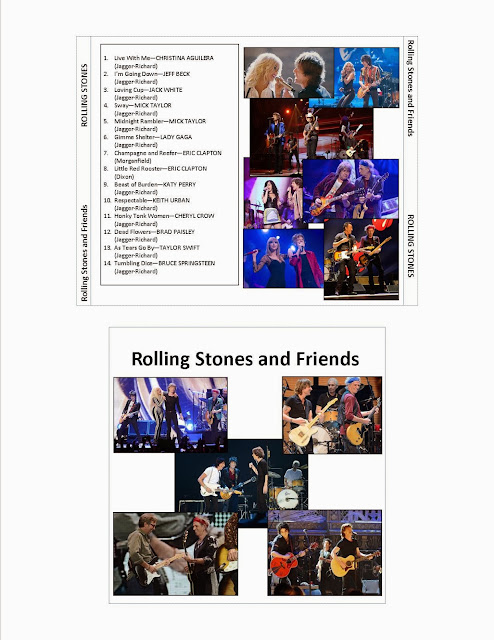 1. Live With Me - Christina Aguilera
﻿Alright, I cheated a bit here. This is actually from the Shine A Light performances. I thought Aguilera was the best of the guests on that package. Live With Me suits her sassy style and of all the shouty female singers on this collection, Aguilera is the pick of the bunch.

2. I'm Going Down - Jeff Beck
Beck is very good as you might expect, but may have focused a little too much on being the quintessential Jeff Beck and come up a little short in the doing justice to the material category. It's also a shame that they didn't feature Jeff Beck on a well-known Stones number. What might he have done with Paint It Black? 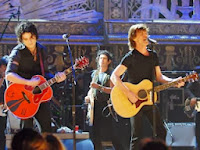 3. Loving Cup - Jack White
Another one from Shine A Light and I have to admit, the guy fits in with the house band, particularly his vocal stylings. I didn't know Jack White from a bar of soap apart from some enthusiastic commentary he did on the Stones in Exile DVD, so at least there could be no doubt about his feelings for the material.

4. Sway - Mick Taylor
This performance was picked up by
an audience-member handi-cam but turned
out okay just the same. The energetic
slide solo is by Ron Wood (Taylor did the slide
on the original) but the outro solo is all Taylor's.


5. Midnight Rambler - Mick Taylor
A very good performance with a great feel, if a little overlong. On the video, watch Taylor
move more during this one song than he did in five whole years as a Rolling Stone!

6. Gimme Shelter - Lady Gaga
This should be a no-brainer. Hell, the original even features a
female vocal of similar style to what Gaga produces here. But I
have to give kudos to Gaga for making her considerable
presence felt in such a tasteful way. Her performance serves as
something of a tribute to Merry Clayton, who sang on the
original studio version.
﻿
﻿

7. Champagne and Reefer - Eric Clapton
An old Muddy Waters number, this one. Not great sound quality but the band and their guest are in good form.

8. Little Red Rooster - Eric Clapton
Another ring-in, this dates from a 1988 Central Park concert guest appearance  by Eric Clapton. It's a slowed-down version of an already slow blues. Clapton does fill-ins over Ron Wood's slide riff.

9. Beast of Burden - Katy Perry
This is probably the worst of all the songs, performance-wise, but I wouldn't be too quick to blame Katy Perry. Mick sings out of tune as well, unusually for him, so I'd be thinking there was insufficient fold-back on the vocals for this Las Vegas concert. 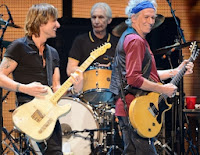 10. Respectable - Keith Urban
This is surprisingly good in terms of sound quality and even though I'd initially questioned the choice of song for Urban, he carries it off with considerable charm. Just a little bias-alert for you: Respectable is one of my least-favourite Stones' songs. Far Away Eyes or any of the Stones' country-influenced material might also have suited Urban.

11. Honky Tonk Women - Sheryl Crow
Crow had sung backing vocals for the Stones on tour before her
solo career took off in the mid 90s. A regular onstage guest,
here she looks like she's pretty keen to let everyone know she's
all grown up now with a performance brimming with confidence
and full-on delivery.

12. Dead Flowers - Brad Paisley
I'd never heard of Brad Paisley but I immediately thought that if he's a country artist, then he could do a lot worse than to join the Stones for Dead Flowers. I wondered whether Paisley may have felt a bit intimidated by the Stones but it all goes down quite well as his voice blends effortlessly with Jagger's.

13. As Tears Go By - Taylor Swift
Taylor Swift gives one of the better performances - where the
guest artist is true to themselves and to the material, without
exaggerating anything. While As Tears Go By isn't the most
stimulating of the Stones' catalog, Swift enhances the song by
giving it a little country yearning without overshadowing what is
essentially a diffident English ballad. Wild Horses might have
been another song worth bringing her in on. 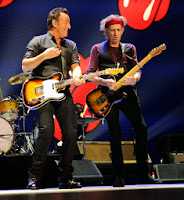 14. Tumbling Dice - Bruce Springsteen
This is quite a good rendition of Tumbling
Dice. I have to admit I never know quite where to place
Springsteen. I respect the guy a lot and agree with pretty much
everything his public persona stands for. His music, not so
much. But he gives it everything and the only criticism I could
make is that his delivery may have overstated his Springsteen-
ness to near Louis Armstrong impression levels.
﻿

As I've mentioned in a couple of the track notes above, some of the song choices don't quite gel, but it's one of those situations where you could always make better suggestions. And yes, the sound quality varies quite a bit. Plus some of the performers seem to be trying too hard, particularly the female singers.

But overall, this is quite a good collection and the guest artists provide a significant point of difference from other Rolling Stones live albums, so I'd rate this as a Stones' live album that delivers something new for Stones fans. Back in 1995, Stripped was a real eye-opener due to the inclusion of songs that would be considered little-performed Stones' curiosities and enhanced arrangements for their more standard live fare. This collection provides a not dissimilarly varied snapshot of an important stage in the evolution of Rolling Stones' concert performances.
Posted by Lad Litter at 10:48

Great work Lad.
I can't stand Meg and Jack White though, and would rather see Jack BLACK play with Keef.
I just put up a lovely 1970 concert image of KR and you are welcome to swing by The Marshall Stacks to smile.
What a thrill it would be to see the Stones play a small venue, which brings me to my other wish: that they could play out their old age the same way their initial heroes did - clubs with low ceilings.
This is a 5-star post mate, thanks for the pleasure.

That's lovely of you MS, as usual. If you like the Stones in small venues, then the 1995 live album Stripped is the one for you. It contains enhanced arrangements of their songs too.

Hi Lad - hope you are not suffering from Hanging Rock cancel.
Such a lot has happened Stone-wise since your Feb post.
Wish I could have my suspicions confirmed by knowing what the magnificent Mr Charlie Watts thought of that awful father whose little boy bought himself a meet and greet via that historic cymbal gift.
Funny thing tooling along the C146 yesterday I usually just listen to the car making the Speed Warning Alert noise but I had Exile On Main St and did 50 kms @ 20kph under my usual rate. Toe tapping on the accelerator had to be suppressed.
Sir Mick has the power to beat an insurance company away from making him look bad by inferring that his girlfriend was in a bad state of mind. I just know his interest in their interest was Self-interest.