Revenge Is A Kind Of Wild Justice II

Recap From Previous Post:
1. I’d been punched and pushed around when I was 13 by a bunch of smart-alecs, in particular one nasty little shit who I was to learn later was called Wog by his mates;
2. Two years later, I was due to play football against this nasty little shit;

The plaster came off my arm after less than four weeks and it felt funny. Smelt funny too. The good people at Royal Melbourne Hospital had used a little circular saw that sounded a lot like a dentist’s drill. I was going to need to exercise to reverse the small amount of wastage that had occurred, and keep it strapped up to hold it steady.

The doctor had given me the all-clear to resume playing football after a further two weeks. This would see me taking the field for my local team a week earlier than anticipated, giving me a game under my belt before we took on the team captained by Wog. Until my dad stepped in and told me I would be waiting an extra week as a precaution.

I did what any fifteen year-old would do: argued; explained; pleaded; whinged; and wheedled, until Dad was just about to blow his top and increase the precautionary recovery period. And then I stopped. There was no weakening Dad’s resolve, and anyway, he came to watch me in every game despite my being borderline-hopeless, so he had some credit with me where footy was concerned.

So I trained hard but carefully for the first two weeks, and then normally for the week leading up to our next game. I don’t mind telling you I was pretty nervous about that match. Firstly, there were the nerves that come in the lead up to any game of football; then apprehension about my possible performance – we’d lost a few games during my absence (but not because I wasn’t playing) and needed the win badly; and finally, the dread of not being gutsy enough to do anything to Wog, leaving me to feel doubly humiliated.

I hadn’t told anyone about any of this: not the original confrontation; nor its possible on-field resumption. There was nothing to tell, really. It was like a dirty secret that needed to be kept hidden, so I never mentioned it.

And I had no plan of action either. I was just going to play, and see what would happen.

Now, we’re going back all the way to 1975 here, when Gough Whitlam was PM; the Post Master General’s Department had just become Telecom; Sweet’s Fox On The Run was the Number 1 single; the Suez Canal had just reopened for the first time since the 1967 Six Day War; Jaws and One Flew Over The Cuckoo’s Nest were the big movies; and I was furiously saving too buy a lumber-jacket and a pair of ugg boots. So I think it’s forgiveable if I only have three clear recollections of this match:

1. Our coach moved one of my fellow limited-ability team-mates from his usual wing opposite me, into the ruck-roving position. He played a blinder and made a big contribution to the win with his marking and a timely goal from a long way out. He’d slipped as he kicked it and the ball gained extra distance. The gods only have to love you for a little while to turn your fortunes around;

2. Our rover and Wog had resumed hostilities and went at each other like a pair of Kilkenny Cats, using both fair means and foul. And Wog was coming off second best;

3. Late in the third quarter, Wog was about 20m in the clear but struggling to pick the ball up as he ran, head down and bent over, out of the half-back line. I was about 25m in front of him and he was odds-on to clear the footy downfield unless I did something. Soon.

I made a run at him at about three quarter pace, ready to dip my shoulder and tuck my arm in at my side, curving and quickening slightly ahead of him as he rose in possession of the ball. If I timed it right, a good old-fashioned shirt-front might both hurt and dispossess him, leaving the ball nearby for me to swoop on. Now running at full pace, that was about when my feet left the ground. 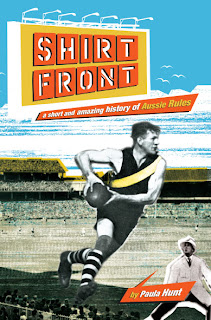 My right shoulder struck him on the collarbone, but I didn’t cause any damage there because my arm had already impacted on the left side of his chest. He bounced straight off and lay flat out on his back, groaning. He was only winded. No broken collarbone, no neck trauma.

The ball was by his side and the whistle had gone for him to get a free kick. I went over as if to help him up and grabbed two handfuls of the front of his jumper and lifted and jumper-punched him rapidly into the ground a few times. That got us a 15m penalty but he couldn’t take the kick. No-one came to square up for him so I lingered in the area.

When he was helped up he said to me:

“You’ll get yours you fuckin’ cunt.”

I didn’t say anything. We were winning.

Our paths didn’t cross for the rest of the match, possibly because he was taken off, but maybe not, because to give credit where it’s due, he was a pretty gutsy player.

Quite a few nasty little shits are.
Posted by Lad Litter at 22:47

I love a good comeupence! Glad he got what he had coming, but what we really want to know is, did your team win?

Blakkat: We won easily but they weren't all that flash so victory was expected. It all turned out just fine, as I didn't need to resort to thuggery to get him back. Football is brutal enough in its own right.

I wonder what happened to him? If all's right with the world then he ended up a liberal politican.

(Excuse my extended absence, btw, I blame it on house-sitting and lack of internet access)

at the start of Part The Second, I was worried that the finif would be another break for you, so I was relieved it ended well.

BC: I never saw or heard of him again, funnily enough. Glad to hear you're backonline.

AOD:
It turned out okay with just the right amount of moment-seizing. And thanks, I'll check FB for details.

Ooh. Nice post/s, and nice to see there is some usefulness in brutality in sport!
There's another post after this yes?

EB: Why, thank you! Yes, there are a few loose ends that need tying up so I'll be concluding this series shortly.